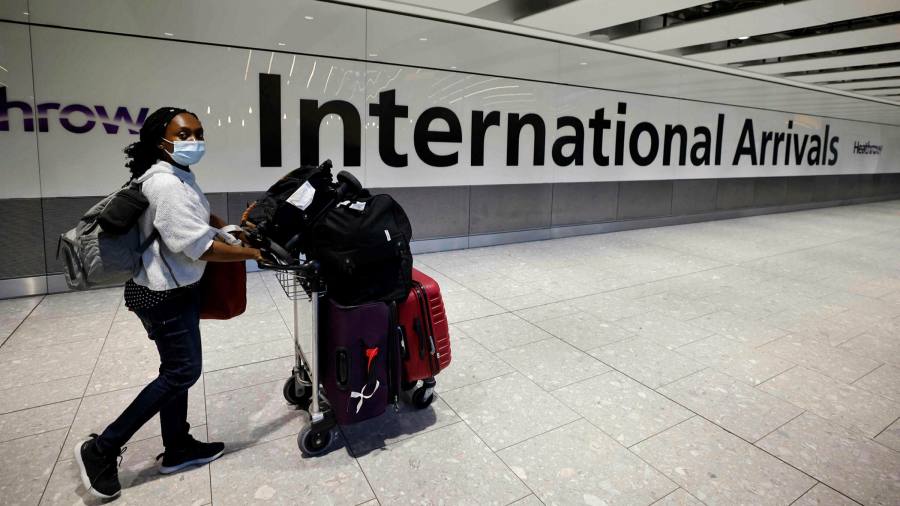 Fully vaccinated travellers from France will no longer be required to quarantine on arrival in England, the government has announced.

Thanks to a fall in the proportion of Beta variant cases, first detected in South Africa, France will be removed from the contentious “amber plus” category and put back on to the “amber” list from 4am on Sunday.

The move means the “traffic light” entry system will be simplified to green, amber and red, with an additional watchlist of countries at risk of moving from green to amber.

Spain will remain in the amber group, meaning unvaccinated passengers must self-isolate on arrival.

The UK will also extend its vaccination programme to 16- and 17-year-olds. The U-turn came as governments from Scandinavia to the Mediterranean began targeting adolescents, helping the EU overtake the US in inoculations.

Thanks for reading FirstFT Europe/Africa. Do you agree with the decision to drop quarantine requirements for arrivals from France? Why? Have you, or someone you know been affected? I would love to hear your thoughts. You can reach me at jennifer.creery@ft.com. — Jennifer

1. Robinhood soars Shares of the brokerage used by many retail investors to drive the furious “meme stock” rally this year rose 50 per cent yesterday, giving it a market capitalisation of $58.9bn. The volatility prompted multiple trading halts on the Nasdaq, with Robinhood at one stage having surged as much as 82 per cent.

2. Uber’s weaker than expected earnings Heavy spending on incentives to address driver shortages weighed on Uber’s ride-sharing business, dragging down its overall performance as it continued to deal with the effects of the pandemic.

Elsewhere: DoorDash is preparing to make its first investment in Europe, taking a stake in Gorillas, the German grocery delivery app.

5. John Lewis minimum wage breach The retail group was included on a list of employers “named and shamed” by the UK government for paying staff below the legal minimum. John Lewis said the process penalised them for technical breaches rectified several years ago.

Instagram temporarily blocked Jamaican sprinter Elaine Thompson-Herah over copyright restrictions after she shared videos of her gold-winning 100-metre and 200-metre races. She ran the second-fastest time in women’s history in the latter.

Sifan Hassan, who arrived in the Netherlands as a 15-year-old refugee from Ethiopia, is embarking on an unprecedented challenge to win the 1,500-metre and 10,000-metre races after blowing away rivals in the 5,000-metre.

The Olympic bubble has prevented the spread of Covid-19 by athletes and officials, but there has been a collapse in public vigilance, said a leading doctor. (Guardian, FT, BBC)

Add ‘Tokyo Olympics’ to myFT for all our coverage from the Games, and don’t miss our “alternative medals table”.

The World Health Organization urged wealthy nations to delay booster shots until at least the end of September as shortages hit lower-income countries.

Full vaccination halves the transmission of the Delta variant and is 60 per cent effective at preventing symptoms, according to new research.

Activity in Spain and Italy’s services sectors grew last month as restrictions eased, according to a widely watched business survey.

Infections are rising again in India after weeks of steady decline, fuelling anxieties about the threat of a third wave.

Sign up for our Coronavirus Business Update newsletter and follow the latest developments on our live blog.

Bank of England confronts inflation Interest rate setters will have a lot of explaining to do when they publish their latest decision along with an updated assessment of the economic outlook today.

More economic data: The US trade deficit is expected to have widened in June. The European Central Bank will publish its economic bulletin. France has industrial production figures. Read the full list here. (FT, WSJ)

Hong Kong singer in court Anthony Wong was charged on Monday with “corrupt conduct” over a 2018 election rally where he provided “entertainment to induce others to vote” for a pro-democracy activist, according to Hong Kong’s anti-corruption watchdog. (FT, Reuters)

What else we’re reading and watching

How FC Barcelona blew a fortune Before Covid, FC Barcelona became the first club in any sport to surpass $1bn in annual revenues. Now its gross debt is about $1.4bn, much of it short-term. The pandemic hurt, but it was only the coup de grâce. Simon Kuper asks, what went wrong?

Watch: how to build an artificial tree A tiny start-up founded by three Stanford graduates believes its lab holds the secret to reducing climate change. This video shows how their technology turns unwanted CO2 into useful products such as car parts, trainers and alcohol.

Video: How to build an artificial tree

How Andrew Cuomo’s support melted away The New York governor’s political support is collapsing after a five-month investigation found that he had allegedly sexually harassed multiple women. New York correspondent Joshua Chaffin reports that friends and allies, including Joe Biden, have distanced themselves from Cuomo.

All the lonely people — the power of connection Three books examine the perils of loneliness, a problem that has only intensified during the pandemic, and offer practical solutions as well as the salve of solidarity. Emma Jacobs, meanwhile, writes about how lockdowns have allowed us to reappraise our approach to drinking.

Trade Secrets — A must-read on the changing face of international trade and globalisation. Sign up here