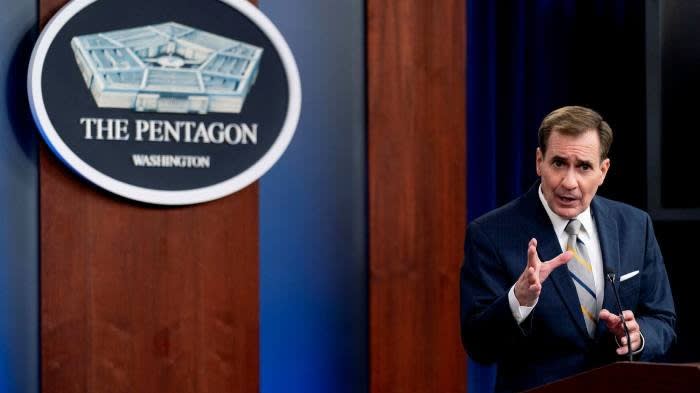 The US and UK will deploy troops to help evacuate staff from their embassies in Kabul as the Taliban continues its lightning rout of provincial capitals in Afghanistan following president Joe Biden’s decision to withdraw American troops.

The Pentagon said it was sending 3,000 troops to Kabul in the coming days to help with the embassy evacuation, including aircraft that could help fly personnel out of the Afghan capital, and a back-up brigade of 3,500 soldiers to Kuwait in case the security situation deteriorates further.

The State Department said it was pulling diplomats out because of the threat posed by the advance of the Taliban, adding that only a small number of personnel would be left after the operation was completed. John Kirby, the Pentagon spokesman, insisted the deployment was not part of a combat mission, though soldiers would be equipped to defend themselves.

“We are further reducing our footprint in Kabul in light of the evolving security situation,” Ned Price, state department spokesperson, said yesterday. “We expect to draw down to a core diplomatic presence in Afghanistan in the coming weeks.”

The UK deployment, also announced yesterday, will include 600 troops for speeding up evacuations of some diplomatic personnel and Afghans who worked with British forces.

2. Reddit value jumps to $10bn after new fundraising The online discussion forum, whose users roiled US stock markets earlier this year, is experiencing its own valuation spike with a new financing round putting its worth at $10bn. The company has tripled in value in the past two-and-a-half years.

5. Fed could limit stimulus as soon as this year The Federal Reserve could start reducing its pandemic levels of monetary support for the US economy by the end of 2021. A top central bank official pointed to a strong recovery in US economic activity and consumer spending.

US health officials are preparing to authorise a third dose of the Moderna and Pfizer vaccines for immunocompromised adults, as doctor Anthony Fauci said booster shots were “inevitable” for the wider US population.

The fall in the UK coronavirus infection rate has slowed, a leading survey has found, with signs emerging of an uptick in daily cases.

New Zealand will gradually reopen its international border next year and speed up its vaccination rollout, which is among the slowest in the developed world. Several crucial industries have lobbied for easing travel restrictions as the country faces severe skills shortages. After losing the sprint, the EU is leading the vaccine marathon, our editorial board writes. The bloc is now vaccinating at twice the rate of the US or the UK. Sign up for our Coronavirus Business Update newsletter and follow our live blog for the latest.

Samsung Billionaire Lee Jae-yong is expected to leave prison today after being granted parole on Monday. The Samsung leader was convicted for bribing former South Korean President Park Geun-hye to help secure control of Samsung Electronics. His release will refocus attention on the uneasy relationship between the conglomerate and the government.

How Turkey became a star of European tech Since last summer, Turkish tech companies have seen their valuations vault above the billion-dollar mark that is seen as a marker for start-up success. But while a flurry of investment into Turkish start-ups has put Istanbul on the map alongside other European tech clusters, its newfound success has been many years in the making. Why central bankers keep their cool over rising house prices Inflation-obsessed central bankers are growing sympathetic to the plight of millions squeezed out of property markets by soaring prices. But taking action is another matter. Read the fifth instalment of our global house prices series.

Switzerland’s ‘Silicon Valley of smell’ The Covid-19 pandemic has changed how people want themselves, their clothes and their homes to smell. On the outskirts of Geneva is proof of how lucrative scent can be. The efforts of two companies that dominate the way the world smells are exacting, almost Willy Wonka-like, writes Sam Jones.

How do you stay together when you’re thousands of miles apart? When the pandemic hit, abrupt border closures separated thousands of couples around the world. “A Pandemic Love Story” is a year-long web documentary that captures the feeds that constitute long-distance relationships in the digital era. The FT has reproduced a few of these stories.