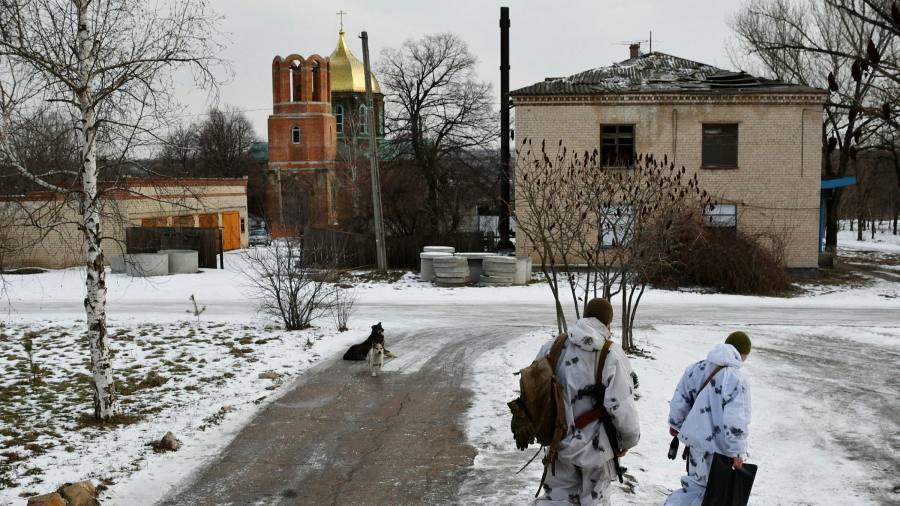 The US ordered family members of its embassy staff to leave Ukraine on Sunday because of the threat of “significant military action” against the country by Russia.

The state department said that all US citizens should consider departing immediately because “security conditions, particularly along Ukraine’s borders, in Russian-occupied Crimea, and in Russian-controlled eastern Ukraine, are unpredictable and can deteriorate with little notice.”

Non-essential US government employees have the option to leave Ukraine if they wish.

The warning came after weeks of mounting tension along the eastern border of Ukraine, where Russia has massed more than 100,000 troops.

Senior state department officials said the travel order was not triggered by new security threats, but by the fact that “military action by Russia could come at any time”. They said the US government “would not be in a position to evacuate US citizens in such a contingency”. The embassy would stay open, they said.

Thanks for reading FirstFT Europe/Africa. Here’s the rest of today’s news — Will

1. China’s naval reach in western Pacific fuels tensions China has established a constant naval presence close to southern Japan and eastern Taiwan, in a marked expansion of Beijing’s sea power that has focused attention on the area as a potential future battleground.

4. UK ‘overstretched’ and ‘outgunned’ in economic crime fight Economic crime costs the UK hundreds of times more than the government spends fighting it each year, according to a report. Spotlight on Corruption, an anti-graft watchdog, said the government spends £852m each year on the budgets of economic crime-fighting agencies. The National Crime Agency estimates that money laundering costs the UK some £100bn while losses to fraud amount to about £190bn.

5. Airlines will be forced to fly more this summer to retain landing rights Airlines will be forced to fly more regularly this summer to retain their take-off and landing rights at UK airports, in a sign that ministers expect a rapid recovery in air travel in the coming months. The Department for Transport said carriers would have to hand back airport slots if they were not used 70 per cent of the time from March 27, up from the current threshold of 50 per cent.

Tourism groups are gearing up for a surge in holiday bookings for the half-term break when ministers are expected to cut the remaining test required for vaccinated travellers to the UK next week.

Australia’s private sector shrank for the first time in four months as the Omicron coronavirus variant disrupted operations in December.

New Zealand’s prime minister Jacinda Ardern will reintroduce tough Covid-19 restrictions — forcing her to cancel her own wedding plans — as Asia-Pacific battles to stop the spread of the Omicron variant.

The Beijing Winter Olympics is posing a challenge to China’s zero-Covid policy.

The Omicron variant is causing far less damage to the eurozone economy than previous waves of Covid-19, according to an FT analysis.

IBM earnings The computer, technology and IT consulting corporation will report its fourth-quarter results.

The Draghi dilemma Mario Draghi presents Italy’s politicians with a dilemma: whether to retain their country’s most celebrated technocrat as prime minister, allowing him to forge ahead with an ambitious EU-funded reform programme, or to elevate him to head of state, potentially triggering a paralysing crisis over a successor to head the government. The uncertainty has renewed anxieties about Italy’s ability to implement difficult but long overdue reforms to improve its growth prospects.

The metaverse’s bandwidth problem The speculative poetry of what might eventually be possible in the metaverse is jumping far ahead of more prosaic reality, experts say. A fully working virtual world, or even just a real-time, high-definition immersive experience, will require far more capacity to transmit data between the consumer and network than is available in homes around the world.

Netflix faces a dystopian future The streaming giant appeared to have the wind at its back at the end of 2021, with the success of Squid Game and Don’t Look Up. But star-studded releases were not enough to give it a significant boost in subscribers in the fourth quarter. What happens if hit shows are no longer enough to lure lots of new subscribers? Get ready for the four-day working week First it was working from home, writes our business columnist Pilita Clark. Now it is the four-day working week that is shaking business life in ways that would have seemed unthinkable before Covid-19. Younger managers are a lot more interested in the idea than the older leaders they are on track to replace.

Millions of Turks flock to cryptocurrencies TV news channels present bitcoin and ethereum prices alongside the dollar and euro exchange rates. Half-time television adverts at football matches tout the virtues of crypto exchanges. Amid soaring inflation and a plunge in the Turkish lira, millions are investing in crypto. The surge in interest has alarmed the country’s authorities who now want to regulate the sector.

The FT’s San Francisco correspondent Patrick McGee takes a deep dive into the controversial rise of connected fitness. Fans of Peloton and its peers describe the gamified experience as a way of getting into fitness, or even building a community, without feeling awkward or vulnerable at the gym. Patrick McGee: “It’s the closest thing yet to cracking the code that will get more people physically active” © Cayce Clifford/FT