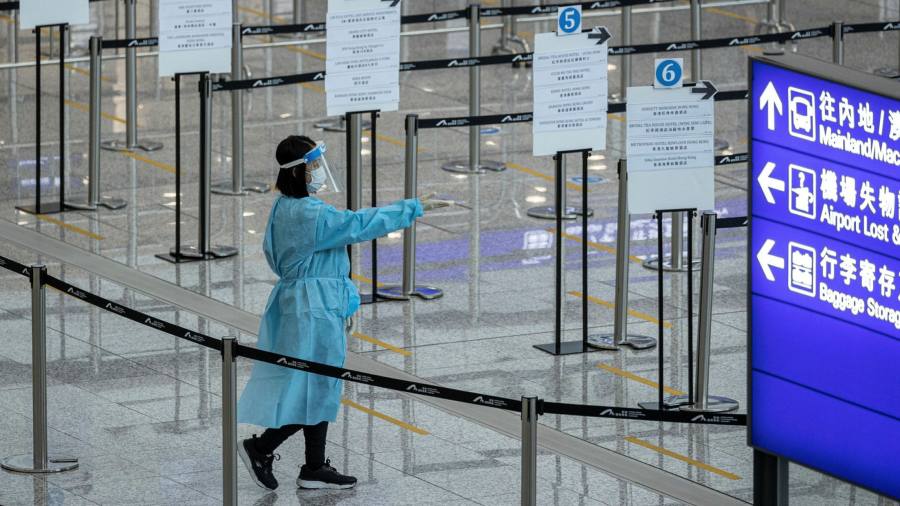 International business groups in Hong Kong are pleading with the government to restart flights as a rating agency warned that a ban on foreign travel would deter companies from using Hong Kong as their regional headquarters.

Executives who travelled home for Christmas have been stranded outside of the Asian financial hub after authorities suspended flights from eight countries, including the US and the UK, to guard the city from the Omicron variant.

David Graham, executive director of the British Chambers of Commerce in Hong Kong, said the “unfortunate” flight ban had taken many by surprise.

“It will inevitably cause considerable disturbance and inconvenience, particularly for the many Hong Kong-based executives and employees who travelled to the UK for the Christmas period to be with family and who were looking to return to Hong Kong early in January,” he told the Financial Times.

“We very much hope that the ban will be for a very limited period given the extensive quarantine and testing measures already in place for those returning from the UK.”

Hong Kong, which is pursuing a “zero-Covid” policy, has reimposed many social distancing regulations after an outbreak that was seeded by Cathay Pacific flight crew, who had been exempt from traveller quarantine orders.

Flights from the eight nations were banned for a 14-day period on Wednesday last week. Other airlines, such as Air Canada and Virgin Atlantic, have temporarily halted flights because they were unable to accommodate the Hong Kong government’s quarantine requirements for crew.

The government said more stringent measures had to be implemented because the city was facing the risk of a “major outbreak”.

Fitch Ratings said, however, that the new restrictions could damp Hong Kong’s economic growth prospects. “We believe the tightening of restrictions on international arrivals will create further obstacles to the territory’s ability to serve as a regional headquarters for foreign multinationals,” it said.

Hong Kong has also recently introduced a seven-day compulsory quarantine for pilots and crew operating cargo flights. The measure has created mayhem for flight schedules, with Cathay Pacific cutting its cargo capacity to 20 per cent and passenger capacity to 2 per cent of pre-pandemic levels.

Those wishing to enter Hong Kong from most countries are already subject to three weeks’ isolation in a hotel and in some cases a government quarantine facility.

The restrictions have prevented the deaths and strains on health systems seen elsewhere, but have also cut the city off from the rest of the world.

At the same time, however, the city has failed to persuade the very elderly to be inoculated, with just over 20 per cent of people aged 80 and over vaccinated.

International business groups have previously warned that Hong Kong risked its crown as the region’s premier financial centre if it did not reopen its borders.

“The flight restrictions add yet another level of stress, cost and uncertainty for business executives living in Hong Kong,” said Tara Joseph, head of The American Chamber of Commerce in Hong Kong, which represents 1,400 companies in the Chinese territory.

“Some people are stranded, others are fearful of what’s next and there is no indication of when this will end.”

The US consulate in Hong Kong said there needed to be “greater dialogue and transparency regarding travel, testing and quarantine measures that affect Hong Kong as a place to live and do business”.