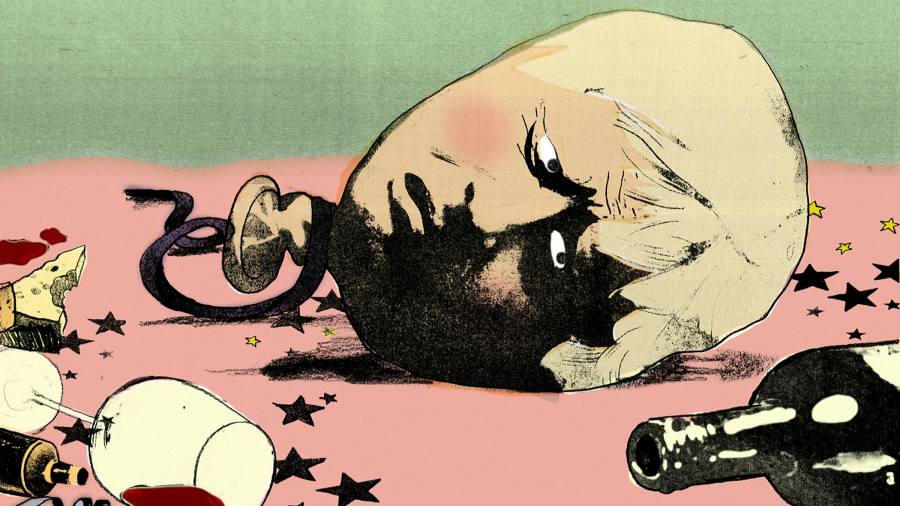 Perhaps in the future, groups of schoolchildren visiting the Houses of Parliament will pause before the statue of a former prime minister. As they study his face, the unruly hair finally tamed in bronze, the teacher will explain that this is Boris Johnson, a leader of indisputable historic significance brought down by a “bring your own bottle” party.

As so often with leaders, the prime minister’s undoing may be the features that once made him attractive to voters, in this case his irreverence and carelessness. With the big Brexit battles won, allies are less tolerant of his weaknesses. A run of unforced errors culminating in the revelation he broke his own Covid laws by holding, or at least attending, a party in the Downing Street garden now places him at serious risk.

He is not ready to give up the fight. Major personnel changes in Downing Street are likely. He used prime minister’s questions to deliver another of those humbling apologies he is normally loath to offer, though the sullen silence of his own MPs suggests they are will struggle to rally round his partial admissions of fault, especially after the previous days of obfuscation. But even if he can get past the immediate crisis, which has shocked both voters and colleagues, it is hard to see how he can recover his authority and popularity. He hay have bought some time but one seasoned operator notes: “It is not sustainable. I can’t say exactly how this plays out, but I don’t see it ending well.”

It is not easy to oust a sitting prime minister and Johnson’s ability to get out of scrapes is legendary. But increasingly Tories are wondering if the only choices left to them are a surgical strike or lingering death.

Amid fast moving political situations one can lose sight of underlying trajectories. But, even before this new crisis, Johnson’s popularity has been on a clear downward slide since June. The odd spot poll will bubble up but the overall path is clear. Among all voters, the percentage saying he is doing a good job has fallen from 48 per cent to 23. The pattern is the same among Tory voters, albeit from a far higher peak. On the “best prime minister” question, he has now undertaken the Labour leader, Keir Starmer. Labour’s current primacy owes more to a Tory fall than any sudden surge of enthusiasm and outright victory would still require the scale of national swing seen only twice since the war. But depriving the Tories of their majority now looks possible.

The conclusion Johnson’s vengeful ex-strategist, Dominic Cummings, is urging Tories to reach is that the prime minister has become a drag on their prospects. This latest backlash is pushing MPs towards Cummings’ assertion that they can only win with “a new PM”.

There is no direct sanction for a premier who breaks the rules. Labour might trigger a formal confidence vote but the likeliest route to removing Johnson is a contest triggered by his own side. While 53 MPs can force a leadership vote, victory would require half the parliamentary party, around 180 MPs, to turn on him. Since a challenge can take place only once every 12 months his enemies will not wish to shoot and miss. The temptation to wait till after the May local elections will be strong.

For now, Tory MPs may shelter, as was intended, behind an investigation by a senior civil servant, Sue Gray. But this misses the broader point. Legalism is never the path to take with voters. MPs may wait for the report but they will draw false comfort if it somehow allows Johnson to wriggle free. The image of him at a party in his own garden at a time when such events were banned and people saw relatives dying alone will talk louder than any report. It was arrogant, witless and lacking in basic decency. The idea that a sitting premier did not know a social event when he saw one is beyond belief. No MP should need an inquiry to know where they stand on this.

There are reasons Tories are hesitant to strike. Some will want to see if the semi-apology does quell public anger. They do not know who comes next and worry that only Johnson can hold his broad electoral coalition together. But while some may hope he can recover, they cannot see anything to reverse the downward trends. Coming months will be dominated by cost-of-living increases, tax rises, Brexit dislocations and rows over net zero policies. Events can change the dynamic but there is no obvious moment of reprieve.

That leaves Tories relying on Labour remaining too unappealing when voters face a real choice in an election. This is certainly possible but, if the polls do not recover, MPs will not take the risk of waiting to find out on the day.

Johnson’s strategy, as always, is to temporise, hope his enemies are afraid to strike before the local elections and count on something turning up to restore his support. He may yet suddenly see the value of backbench demands for the temporary removal of VAT on energy bills. But his MPs are livid and there is a cadre of people, notably Cummings himself, committed to his removal.

Traits that once endeared Johnson to his supporters are now seen as an obstacle to good government. Even for the Teflon leader, this latest display of amorality may be too much. Voters see both his personal weaknesses and the collapse in his authority over his own MPs.

In this matter, Tory MPs will be governed by fear. They will not act till their fear of defeat outweighs their fear of striking, but the gap between those two points is narrowing fast.