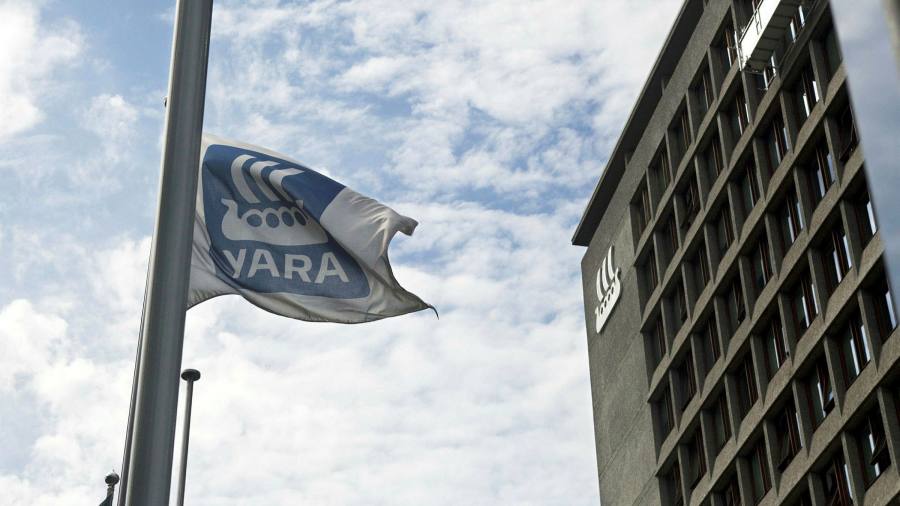 Sign up to myFT Daily Digest to be the first to know about Oil & Gas industry news.

Europe’s food industry is braced for disruption after a second fertiliser group closed plants, as the impact of the region’s gas shortage threatens to ripple through the supply chain.

Norway’s Yara International said on Friday it would curb production at several facilities in the EU and UK, adding to the shuttering this week of two large UK fertiliser factories owned by CF Industries of the US.

Soaring natural gas prices are causing chaos among makers of ammonium nitrate, a staple fertiliser derived from the fuel, as they battle to pass on the costs to customers.

As well as the potential impact on crop yields, the fertiliser industry is critical to the supply of carbon dioxide, a byproduct of the production process that is vital to sectors from meat to beer.

Beer and soft drinks companies rely on CO2 to provide the fizz to beverages, while the meat industry uses CO2 to stun livestock before slaughter.

Nick Allen, chief executive of the British Meat Processors Association, said the government had asked him to gather data on what was a potentially “massive” problem for meat producers. “We are hearing that there are no definite plans to reopen [the plants] and that’s 60 per cent of the CO2 production in this country,” he said.

He added that CO2 was also used in packaging to extend the shelf life of meat and foods such as salads, a critical function during a period of supply chain disruption.

Processors were waiting to see if they would receive CO2 deliveries scheduled for Friday, he said, adding that while some businesses had built up storage capacity after a CO2 crisis in 2018, any stockpiles would last only a few weeks.

John Raquet of industrial gas consultancy Spiritus warned of shortages at slaughterhouses, saying the situation would “have a serious impact on CO2 supply”.

Gas prices in the UK and Europe have surged to new highs in recent weeks, with traders warning that the region is heading into winter with record-low inventories.

Yara, one of the world’s largest fertiliser producers, said 40 per cent of its European production capacity for ammonia would be curtailed by next week to protect its margins after surging gas prices eroded profitability.

Of the company’s 4.9m tonnes a year of ammonia production in the region, it plans to halt approximately 2m tonnes in the Netherlands, Italy, UK and France. Plants in Germany and Norway were already scheduled for maintenance, further reducing production capacity.

It said it would partly source the ammonia it needed to produce ammonium nitrate from outside of Europe or third parties, and that “the impact on finished products is currently minor”.

The length of the curtailments would depend on the price of ammonia’s two key inputs, natural gas and nitrogen, the company added.