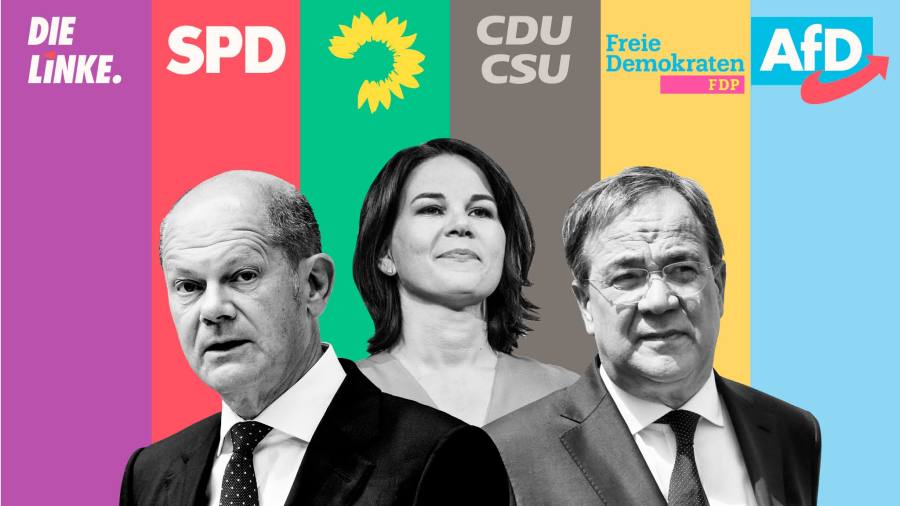 The German federal election on September 26 will determine who will succeed Angela Merkel after her 16 years as chancellor.

The FT is tracking opinion polls about voting intentions ahead of the vote, which will mark the start of a new political era in Europe’s biggest economy.

Polls suggest Merkel’s centre-right CDU–CSU bloc is likely to remain the largest group in the new parliament, making its candidate Armin Laschet the frontrunner to be Merkel’s successor. But the approval ratings of both the group and Laschet have sagged lately.

Meanwhile, its coalition partner in the outgoing government, the centre-left Social Democrats (SPD), has been gaining some of the ground it lost since the 2017 election. The SPD finance minister Olaf Scholz has the highest approval ratings of the candidates for chancellor. His party is running second in recent polls.

After a strong initial start, the Greens are now in third place. Still, they could more than double their share of the vote from the last election. Similarly, Annalena Baerbock, the Greens’ first-ever candidate for chancellor and the figure who initially topped polls, will need a late surge in support to reach Germany’s highest political office. Even so, the Greens could play a kingmaker role in the next government.

That may be even more likely given the resurgence of support for the pro-business liberal Free Democrats. If sustained, that would create new options for a governing coalition.

If neither the SPD nor the Greens gain sufficient support to form a governing coalition with the CDU/CSU, Germany may be heading towards its first three-party Federal government. German coalitions are often described in terms of the participating parties’ traditional colours, or after nations whose flags share them. Possible combinations include:

‘Jamaica’: Talks to form a coalition of the CDU/CSU, Greens and FDP (yellow)— broke down following the 2017 election. But this year could be different.

‘Germany’: A black, red and yellow government would add the FDP to the current CDU/CSU-SPD government.

‘Traffic Light’: The most likely option for a government without CDU-CSU ministers would be a pact between the Greens, SPD and FDP. However, who would be chancellor in this scenario remains unclear.

‘Red-Red-Green’: Similarly, a ‘left alliance’ of the Greens, SPD and Left party — led by either Scholz or Baerbock — would also be possible according to recent polls. But if the CDU-CSU is returned as the largest parliamentary group, it would have the first opportunity to form a coalition before either a Green- or SPD-led effort becomes an option.

At each point in time, the FT poll-of-polls includes the most recent voting-intention poll from seven pollsters as compiled by Wahlrecht.de. The average of their results is weighted to give more recent polls greater influence.

The coalition calculation is based on a projected share of Bundestag seats. This is based on the most recent poll average, excluding parties falling below the 5 per cent threshold of the vote needed to gain seats in the parliament. For the remaining parties, this results in a larger share of parliamentary seats than its national vote share as measured by polls.

Based in part on a previous version by Anna Leach