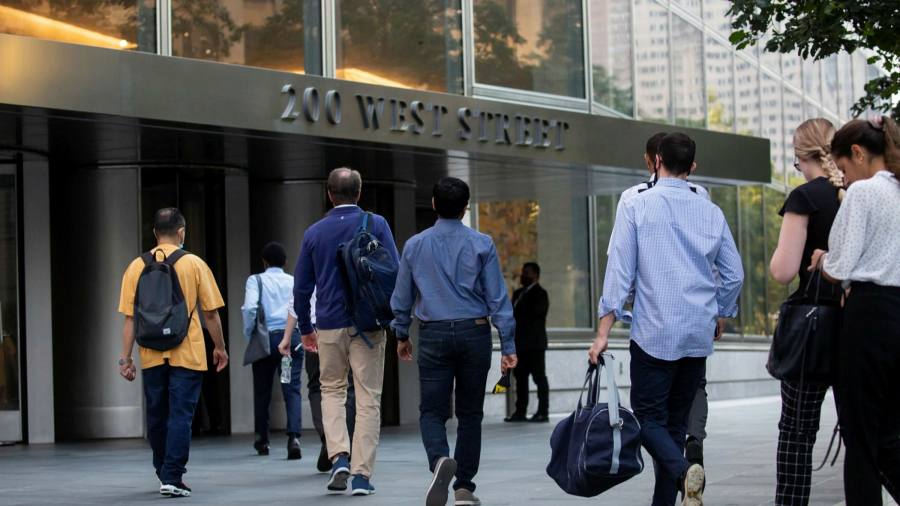 Goldman Sachs will require proof of vaccination from all staff and clients entering the bank’s offices, as vaccine mandates proliferate across the US public and private sectors after the BioNTech/Pfizer Covid-19 jab received full regulatory approval.

The company said the requirement would apply to any individual coming to its offices from September 7, and that any employees who were not fully vaccinated would be expected to work from home.

From the same date Goldman will also include fully vaccinated staff in its mandatory weekly Covid-19 testing programme, which currently applies to unvaccinated or partially vaccinated staff. It will also require masks to be worn in its buildings’ common areas from Wednesday, whether or not people are vaccinated.

Goldman Sachs and JPMorgan Chase were among the most aggressive Wall Street companies in urging staff to return to the office. They made working from the office at least part-time compulsory for most employees earlier this summer. Morgan Stanley told employees and clients in July that they could not enter its New York offices without being vaccinated.

Now is the time for the public and private sectors to come together, listen to the science and mandate vaccination

Goldman’s decision to mandate the vaccine came a day after a Food and Drug Administration announcement granting full approval to the BioNTech/Pfizer jab, for which many employers hesitant about insisting on vaccinations had been waiting.

Rich Lesser, chief executive of Boston Consulting Group, wrote to clients on Tuesday that he expected the FDA’s endorsement to prompt more public and private organisations to introduce mandates.

While few of the companies imposing new vaccination requirements said that the FDA’s approval had been the decisive factor, the regulator’s move was quickly followed by announcements by companies including Deloitte and CVS Health.

Deloitte, the professional services firm, said it would require proof of vaccination for staff accessing its US facilities from October 11, which it noted was “seven weeks after full FDA approval of a major vaccine”.

CVS Health, which owns a health insurer and a pharmacy benefits manager as well as its namesake pharmacy chain, said it would require corporate staff and employees who interact with patients to be fully vaccinated by the end of October and in-store pharmacists to be vaccinated by late November.

The Service Trades Council Union, which represents Disney World “cast members”, also said on Monday that it had reached a deal that all employees should show proof of vaccination by October 22.

The Business Roundtable, which represents the largest US companies in Washington, applauded enterprises that had already decided to require vaccines for some or all employees.

In a sign of business leaders’ impatience with officials who have threatened reprisals against measures requiring proof of vaccination — including Ron DeSantis and Greg Abbott, the Republican governors of Florida and Texas, respectively — the BRT urged state and local policymakers “to support — not impede — companies’ ability to make such a decision”.

The American Medical Association also lent its weight to mandates on Tuesday, saying: “Now is the time for the public and private sectors to come together, listen to the science and mandate vaccination.”

Incentives such as lotteries, in which some states have offered cash prizes or scholarships to people who get vaccinated, have not stopped hospitals from being overwhelmed by the Delta variant surge, Gerald Harmon, AMA president, said in a statement: “The way to regain the upper hand in this fight is requiring vaccinations — specifically vaccine mandates.”

The US has averaged about 141,100 new infections a day in the week ended August 23, according to data from the Centers for Disease Control and Prevention. That is around the highest level since late January and represent an increase of 1,110 per cent from the seven-day average in mid-June, which was the lowest point for 2021.

Several US cities and states plan to require frontline healthcare workers and other public employees to be vaccinated or face regular testing.

California became the first US state to require that all school staff show proof of vaccination or be tested at least weekly, a model New Jersey said this week it would also employ. New York City went a step further on Monday, with mayor Bill de Blasio announcing that all public school staff would need to be vaccinated unless they had a medical or religious exemption.

A poll from The Associated Press-NORC Center for Public Affairs Research found that about six in 10 Americans support vaccinations being required for teachers and eligible students.

Pressure for more widespread vaccination is also building in the sports world, where executives and league directors are moving away from allowing games to be rescheduled to accommodate Covid-19 outbreaks.

Several of the most powerful US college sports leagues, including the Big Ten, Southeastern, and Atlantic Coast conferences, are instituting policies that will force teams to forfeit games should they experience too many cases.

The new terms could have a drastic impact on the lucrative college football season, where playoff spots are determined in part by the number of games played and wins against ranked teams.