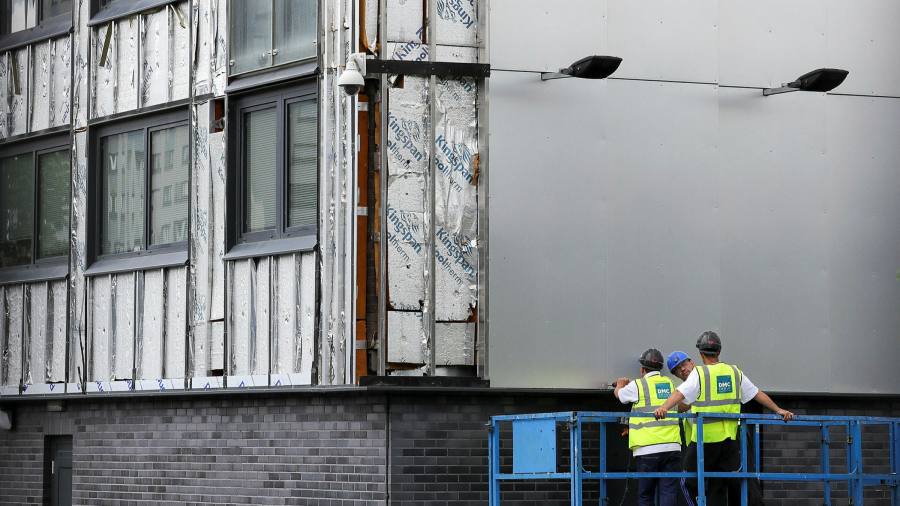 Housebuilder shares tumbled on Monday and executives warned of a legal quagmire after the government gave the industry in England a two-month deadline to find a £4bn fix for the Grenfell cladding crisis.

Michael Gove, the housing secretary, told MPs that he would ensure leaseholders would not have to pay a penny to fix unsafe cladding on all flats taller than 11 metres. “Innocent leaseholders must not shoulder the burden,” he said.

Gove said he would use all the tools at the government’s disposal to force developers, contractors and cladding materials suppliers to cover the costs of fixing buildings in England between 11m and 18m tall.

But campaigners warned the intervention on cladding meant thousands of leaseholders were still potentially liable to cover the cost of fixing other fire safety issues affecting their buildings.

Gove’s announcement hit the construction sector with shares in housebuilders down as much as 5 per cent on Monday.

The government has already earmarked £5.1bn to fix safety issues on about 10,000 high-rise blocks taller than 18m and plans to recoup £2bn of that via a tax on the construction industry over the next decade. But that left 100,000 leaseholders in buildings between 11m and 18m responsible for £4bn of remedial work.

“We welcome the fact there’s more funding for midsized buildings and the end of the desperately unfair loan scheme,” said Giles Grover, a leaseholder and campaigner with End Our Cladding Scandal.

Ministers have struggled to contain a building fire-safety crisis in the wake of the 2017 blaze at Grenfell Tower in west London, in which 72 people died. The tragedy raised questions about thousands of other tower blocks clad in the same combustible material used on Grenfell.

The government exacerbated matters in January 2020 when it advised that all multistorey, multiple-occupancy residential buildings should be assessed for fire risk, which sowed uncertainty among mortgage lenders and left hundreds of thousands of leaseholders trapped in flats they could not sell.

Gove said on Monday he would scrap that controversial advice, which he said had been “wrongly interpreted”, and called for a more “proportionate” approach to fire risk. “Four and a half years on from the tragedy of Grenfell, it is long past time that we fixed this crisis,” he said.

Although Gove’s intervention addresses the cost of replacing cladding, many leaseholders still face large bills to fix other fire-safety issues that have been identified since the Grenfell tragedy. “There are people with £50,000 bills for their flats where none of the work is cladding,” said Clive Betts, Labour chair of the House of Commons housing select committee.

He warned that housing associations and other social housing providers could end up curtailing investment as a result of having to pay their share of the £4bn.

Gove told the industry that should they refuse to engage they could be excluded from government-backed schemes, such as Help to Buy, or pursued legally. He said the seven biggest housebuilders had made £16bn of profits in the last three years. He told MPs that builders who “knowingly” put lives at risk should be held to account.

Lisa Nandy, shadow housing secretary, said she hoped the new measures would work but was sceptical the industry would voluntarily cover the cost of remedial work. “The harder I look at this, the less it stands up.”

One chief executive said the industry could not complain given its high profits and past government support but warned it would still “end up in the courts”. On buildings below 18m, some developers were likely to argue that they had complied with safety regulations and therefore should not have to pay, he suggested.

Sue Ryan, construction partner at law firm Gowling WLG, said she expected a series of lawsuits as developers would be “reluctant” to cover the costs voluntarily. “A lot are not doing so [on buildings] over 18m and their insurers are fighting everything tooth and nail. So potentially this ends up in the courts.”

Gove acknowledged that some developers might not “come sweetly to the table” but said that if necessary the government would use the threat of taxation to make the industry comply.