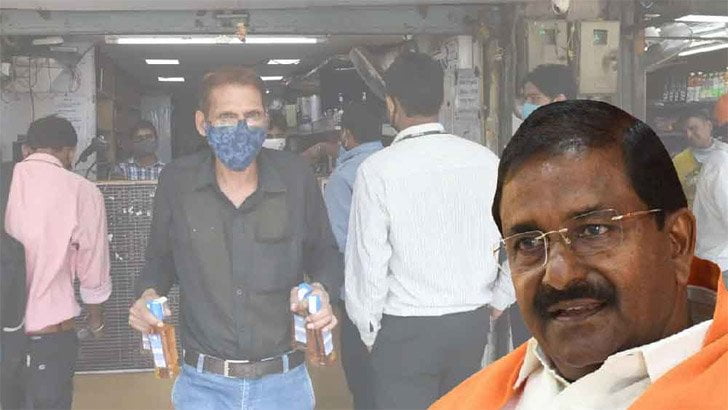 The number of victims in India on Tuesday was 6,356. The country’s daily attacks on Wednesday were 44 percent higher than on Tuesday. Khabar Anandabazar newspaper.

These two states have the highest number of Omicron infections. In addition, the daily infection in these two states has increased a lot compared to the last few weeks. The daily attack in Delhi has reached close to 500. In Maharashtra too it has crossed two thousand.

Andhra Pradesh BJP president Somu Birraju gave good news for the liquor lovers. He announced to give alcohol for only 80 rupees.

He made the announcement at a meeting held at Vijayawada on Tuesday. The Indian media Anandabazar reported this information.

According to the news, alcohol will not be available for less money. If the BJP wins the forthcoming assembly elections by getting one crore votes in the state, then it will get 80 rupees for liquor.

Somu Birraju said that if the party gets one crore votes in the state, the people of Andhra Pradesh will be able to buy liquor for only 80 rupees. If more revenue is available, then the price of liquor will be brought down to 50 rupees.

Addressing the people, the BJP said, “Give one crore votes to the Bharatiya Janata Party. We will supply wine for only 80 rupees. If we have more revenue left, then the liquor will be sold for only 50 rupees.

He also lashed out at the ruling YRS Congress party, saying the state government was selling low quality liquor to the public at high prices.

He reached the state on Tuesday. Khabar Anandabazar newspaper.

Assembly elections are ahead. His visit is thought to have been preceded by a tour of tactics.

Abhishek is scheduled to hold several programs and meetings on Wednesday. He went to the Rudreshwar temple in Sanklelim around 11 am. He is scheduled to visit a monastery in Kankona around 5 pm.

In Goa, polling day has not been announced yet. But the Trinamool has started preparing vigorously for the fight. Abhishek’s visit is being considered to see how the party will move in the upcoming elections.