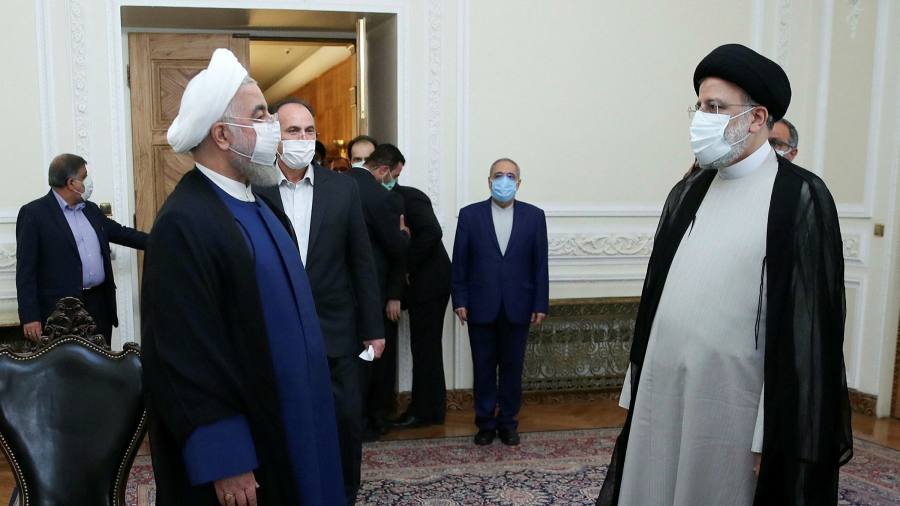 Sign up to myFT Daily Digest to be the first to know about Iran news.

lran’s hardline president Ebrahim Raisi has taken office, taking a defiant tone as security concerns escalate in the Gulf and the Islamic republic seeks to revive the nuclear deal with world powers.

Speaking at his endorsement ceremony on Tuesday, Raisi said he would take steps to have “unjust” US sanctions lifted but his priority was to tackle the economy which could not wait for the revival of the nuclear deal with world powers. “We will definitely not tie up people’s livelihoods and the economy to the alien forces’ decisions,” Raisi said, in his only reference to the nuclear accord.

“What has been damaged more than people’s livelihoods and their jobs is people’s trust [in rulers],” he added in a swipe at his predecessor, Hassan Rouhani, who promised to improve Iran’s economy by striking the 2015 nuclear deal, which fell apart when the US pulled out.

Raisi takes over at a time when the sweeping sanctions imposed by then US president Donald Trump in 2018, after Washington unilaterally withdrew from the deal, have devastated Iran’s economy and exacerbated social pressures.

The country is also struggling with the highest coronavirus fatality rate in the Middle East while anti-government protesters have railed against water and electricity shortages. The ceremony formally marked Raisi’s endorsement as president by Ayatollah Ali Khamenei, Iran’s supreme leader. Raisi is perceived to have been the ayatollah’s favoured candidate in the election and on Tuesday he hailed him as a “relentless” politician who had remained loyal to the ethos of the 1979 revolution.

Raisi, regretting that he could not kiss the leader’s hand because of the pandemic, said his government’s policies would be fully in line with the supreme leader’s guidelines.

The official events in Tehran came amid a diplomatic dispute with the UK that erupted after London blamed Tehran for a fatal drone attack on an oil tanker in the Gulf. A Briton and a Romanian were killed last week when at least one drone struck the MV Mercer Street, which is managed by Israeli-owned Zodiac Maritime, while it was off the coast of Oman.

The US and Israel have also blamed Iran for the attack, which risks complicating the already complex process of getting the nuclear talks back on track. Tehran has denied any involvement.

US president Joe Biden has pledged to rejoin the nuclear accord and remove sanctions if Iran moves back into compliance with the agreement. His administration has been negotiating indirectly with the republic on a return to the deal as Tehran has held a series of talks with the accord’s remaining signatories, the UK, France, Germany, Russia and China.

Mohsen Baharvand, Iran’s ambassador to the UK, told the Financial Times that London’s decision to blame the Islamic republic for the assault on the MV Mercer Street was a “very premature reaction”.

Speaking hours after he was summoned to the Foreign Office on Monday over the incident, he added that the dispute should not damage relations between the two countries or derail talks with the UK and other nations designed to revive the nuclear deal. “We understand one of the UK’s citizens has lost a life and that is for everybody a regrettable act, but that doesn’t mean you can put the blame immediately on one country. You have to investigate the case, you have to have evidence,” Baharvand said. “We are not for escalating — escalation doesn’t help anybody.”

Antony Blinken, US secretary of state, said Washington was “confident that Iran conducted this attack”, and that the US was co-ordinating a “collective response” with the UK, Romania and Israel.

Baharvand, a former deputy foreign minister for international and legal affairs, said the nuclear deal was a “very special case” with its own process and the talks on the accord “should not be affected by anything”.

Baharvand suggested that Israel, which is vehemently opposed to the nuclear deal, was stoking tensions in the region. Iran and Israel are locked in a shadow war, with both trading accusations that they have launched attacks against each other’s merchant vessels and other interests.

Tehran has accused Israel of assassinating a top nuclear scientist and attacking its main uranium enrichment site at its Natanz atomic facility.

Baharvand said Israel had attacked 11 Iranian merchant vessels this year. “If you are worried about the trade [and] shipping, you have to see what is happening there,” he said. “Israel is nervous about the JCPOA [the nuclear deal]. They are nervous about the power of Iran.”