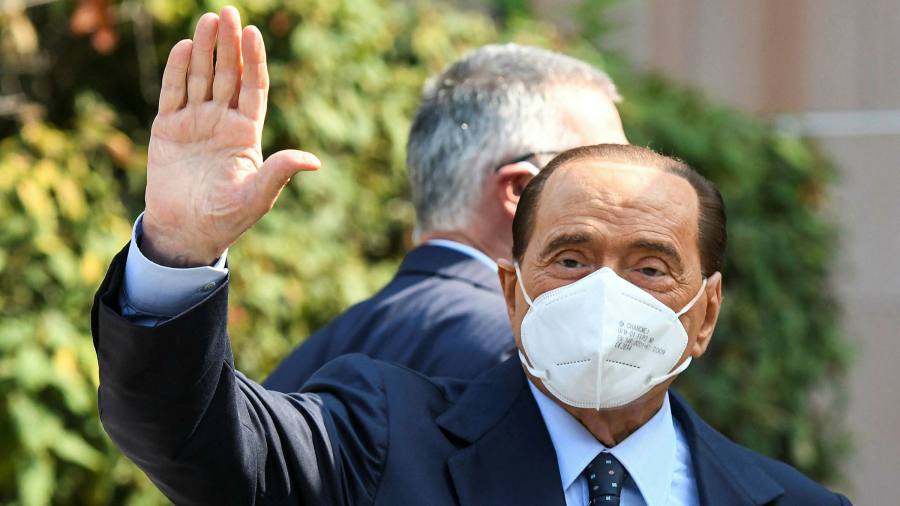 Sign up to myFT Daily Digest to be the first to know about Silvio Berlusconi news.

Silvio Berlusconi has been admitted to hospital in the latest health scare for the billionaire, four-time Italian prime minister.

The 84-year-old, who has been in and out of hospital since he contracted Covid-19 last September at his villa in Sardinia, was admitted on Thursday evening to Milan’s San Raffaele Hospital for a clinical evaluation linked to his recovery from the virus.

Berlusconi was “admitted to the San Raffaele hospital for in-depth checks, as already happened in the past . . . I think he will stay there for a few days,” said Antonio Tajani, a senior leader of Berlusconi’s party Forza Italia, on Friday.

The octogenarian media tycoon’s battle with Covid, which he described last year as “the most dangerous challenge” of his life, followed his recovery from major heart surgery in 2016 and has prompted continuing speculation about the future of Forza Italia.

The party denied reports in the Italian media on Friday that Berlusconi had offered leadership of Forza Italia to Giovanni Malagò, the businessman and president of the Italian National Olympic Committee. The party said the rumours were “groundless”.

His time in office, however, was dogged by multiple scandals, and the popularity of his party has tumbled since he was forced from office during the European debt crisis in 2011.

A Berlusconi-led centre-right coalition won 30 per cent of the vote in the 2013 election, but in 2018 Forza Italia’s share of the vote fell to 14 per cent. At present, the party polls in the single digits, having been overtaken on the Italian right by Matteo Salvini’s anti-migration League and Giorgia Meloni’s Brothers of Italy.

Berlusconi has remained in charge of his party but has long handed over day-to-day control of his business empire to his children. His eldest daughter Marina Berlusconi chairs the family’s Fininvest holding company.

In recent months, Berlusconi has sought to position Forza Italia for after his leadership and has entered into discussions with Salvini over a closer alliance between the two groups.

The unexpected appointment of Mario Draghi as Italian prime minister earlier this year prompted Salvini’s party, which once advocated for Italy to leave the euro, to enter government and attempt to reposition itself as a more centrist party.

Berlusconi said earlier this year that his aim was to “build a Republican party, like the US one, where the centre and the right [work] together to rule the country”.

While many senior Forza Italia lawmakers have backed Berlusconi’s attempts to create a new rightwing group alongside the League, others have resisted the idea. In May, Giovanni Toti, a former Forza Italian member and governor of Italy’s Liguria region, formed a new centre-right party called Coraggio Italia, prompting a mini-exodus of members of parliament from Forza Italia.