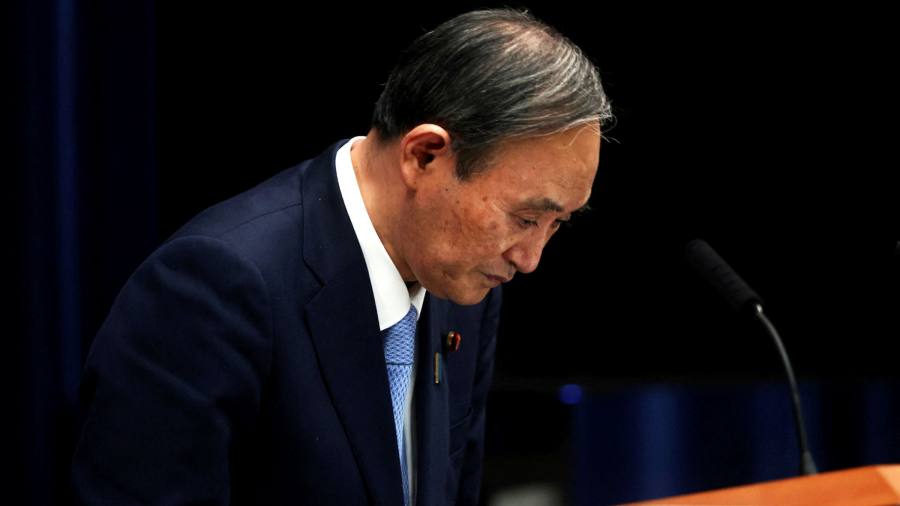 Sign up to myFT Daily Digest to be the first to know about Japanese politics & policy news.

Japan is feeling a little like old times. Yoshihide Suga’s decision to step down as prime minister after only a year recalls the days before his predecessor Shinzo Abe’s almost eight-year rule, when Japan had six premiers in six years. Many in his Liberal Democratic party, however, will quietly see Suga’s decision not to contest a leadership vote this month as a blessing. His personal popularity had sagged, while the LDP had performed poorly in local elections. With a general election looming, his party, and his country, need a different kind of leader.

The new premier, who must contest a national poll by November 30, will face a challenging agenda. The Covid-19 pandemic is far from over. Japan is still recording about 20,000 cases a day, vaccinations will take months to finish, the borders remain closed, and the economy is suffering as a result. These are just the short-term issues. Longer term, Japan must still grapple with the consequences of being the world’s oldest population, the rise of China, and the continuing struggle to sustain demand without endless fiscal stimulus.

Suga has in some ways been unlucky. He is perceived to have handled coronavirus poorly though Japan has the lowest deaths, in total and in relation to its population, of any G7 country. But he was seen as slow to respond to successive waves of infection, was forced in April to U-turn on a pledge that there would not be another state of emergency, and pressed ahead with an unpopular Olympics in the midst of a pandemic.

Some leaders of countries with high death tolls — such as the UK — rescued their fortunes with rapid vaccine rollouts; Japan is the opposite. The glacial early pace of jabs was a particular problem in a country where almost one-third of the population is over 65. Perhaps most importantly, the uncharismatic Suga lacked the communication skills to demonstrate empathy with a suffering public.

He was, of course, chosen in part as a practised backroom operator who could continue Abe’s agenda and was acceptable to the LDP’s powerful factions. But Suga lacked distinctive policies of his own — reducing mobile phone charges was not enough to capture the public imagination — or an independent political base. He sprang a surprise by committing Japan, long a climate change laggard, to achieving net-zero carbon emissions by 2050, but other countries had got there first.

The process that saw him crowned as Abe’s successor last year was flawed, moreover, because it did not allow for a healthy and open debate about the future. Having been chosen as a continuity candidate, Suga never really got to grips with the scale of the tasks facing Japan.

This time, there seems more of a chance of that debate happening in the campaign for the LDP leadership election on September 29. These contests often become a choice between someone who can unite — or at least be an acceptable compromise to — the different factions of the party, and someone who has enemies within the party but a connection with the public.

Candidates must do better than a list of populist spending pledges. The LDP electorate, too, should resist the temptation to plump for a compromise choice. What is needed for the party election, and then the general election, is a leader with the vision to take on the tasks confronting the country, and the political skills to carry the Japanese public with them. Such a figure would stand the best chance of restoring the kind of stability Japan enjoyed under Abe, rather than the revolving door of premiers it experienced before.