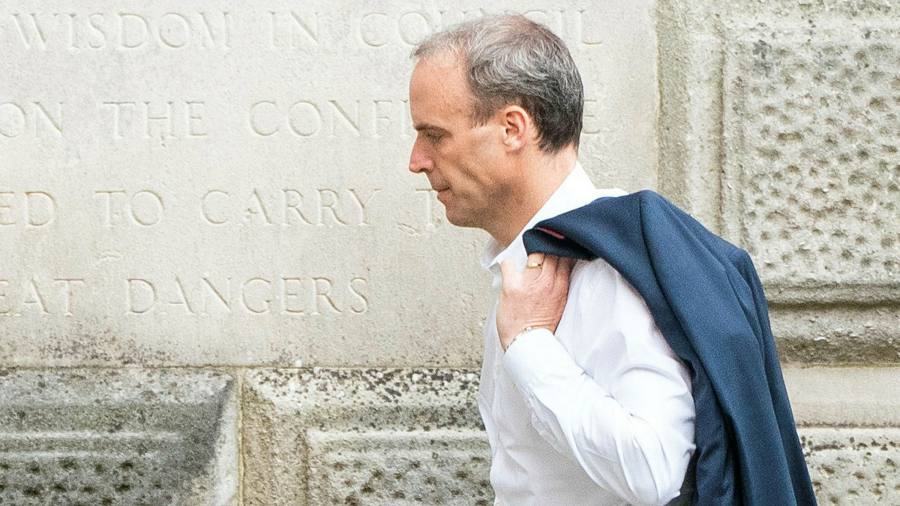 Sign up to myFT Daily Digest to be the first to know about Dominic Raab news.

Boris Johnson said on Friday he had confidence in foreign secretary Dominic Raab despite growing concerns over his handling of the Afghanistan crisis and claims he failed to speak with his counterpart in Kabul about helping Afghan interpreters before the Taliban takeover.

Earlier this week, the Daily Mail revealed that on August 13, Raab delegated an urgent call with the Afghan foreign minister Hanif Atmar to junior Foreign Office minister Lord Zac Goldsmith. The Mail said Afghan officials decided against calling Goldsmith and instead sought to reschedule the call for the following day.

However, officials at the Foreign, Commonwealth and Development Office admitted on Friday that it was not possible to arrange the call between Raab and Atmar on the vital weekend that the Taliban advanced across Afghanistan.

When asked on Friday whether he had full confidence in Raab, Johnson, UK prime minister, replied: “absolutely”. He added that “the whole of government” had been working “virtually around the clock” to handle the growing crisis within the region.

Earlier Raab pushed back on what he described as “inaccurate” reporting and in a statement argued that the call was delegated as he was “prioritising security and capacity” at Kabul airport on the direct guidance of senior officials.

“In any event, the Afghan foreign minister agreed to take the call, but was unable to because of the rapidly deteriorating situation,” he added.

“Given the rapidly changing situation it was not possible to arrange a call before the Afghan government collapsed,” the FCDO confirmed.

The foreign secretary said the government’s “overriding priority” in recent days had been to secure the evacuation of as many people from Afghanistan, noting that 1,635 UK nationals and their families had been taken out of the country since August 16.

The government has also announced that councils within England, Wales and Scotland will have access to a £5m Afghan LES (Locally Employed Staff) Housing Costs Fund, aimed at helping local authorities support Afghans relocating to the country.

The fund follows the announcement of the Afghan Citizens’ Resettlement Scheme which was launched by the UK government on Tuesday to help grant Afghans a safe and legal route to resettle into the UK. It is expected around 20,000 people will use the scheme, which prioritises the most vulnerable including women.

Some Tory MPs on Friday sought to defend Raab, who in recent days has faced calls to resign.

James Heappey, defence minister, argued that staff across government were “working their backsides off” to secure the safe evacuation of Afghans eligible to come to the UK, adding the delegated phone call would not have made a difference to how events played out in the country.

“The reality is that no one phone call would have changed the trajectory of either the speed of collapse of the Afghan government, nor the speed at which we’ve been able to get the airlift running,” he added, speaking to BBC Radio 4’s Today programme on Friday morning.

Writing on Twitter, former cabinet minister David Davis described the foreign secretary as the “most workaholic minister in this government” and argued that “events were happening so fast” that Raab had to “prioritise other actions”. Opposition parties have in recent days piled pressure on Raab, accusing him of complacency during the crisis.

The foreign secretary flew back into the UK from Crete, Greece, on Sunday evening where he had been on holiday.

Earlier this week, newspaper reports claimed that he was pictured by members of the public at the five star Grecotel Amirandes Boutique hotel.

“Who knows how many more people might have been saved in the hours leading up to the fall of Kabul if the foreign secretary had made the call he was advised to,” she said. “To suggest it was too late to stop the capital falling to the Taliban is not a defence, but a shameful admission of his own failure to act sooner.”

Labour has called for the government to urgently answer 18 questions to clarify key details about the dates of Raab’s holiday, calls undertaken by the foreign secretary while abroad, and preparations made for the evacuation of British nationals and eligible Afghans.

Raab, who has rejected demands for his resignation, met Nato allies virtually on Friday. The group reiterated the importance of constructing a unified approach to combating terrorism threats within the region and ensuring that the Taliban respect human rights within Afghanistan.