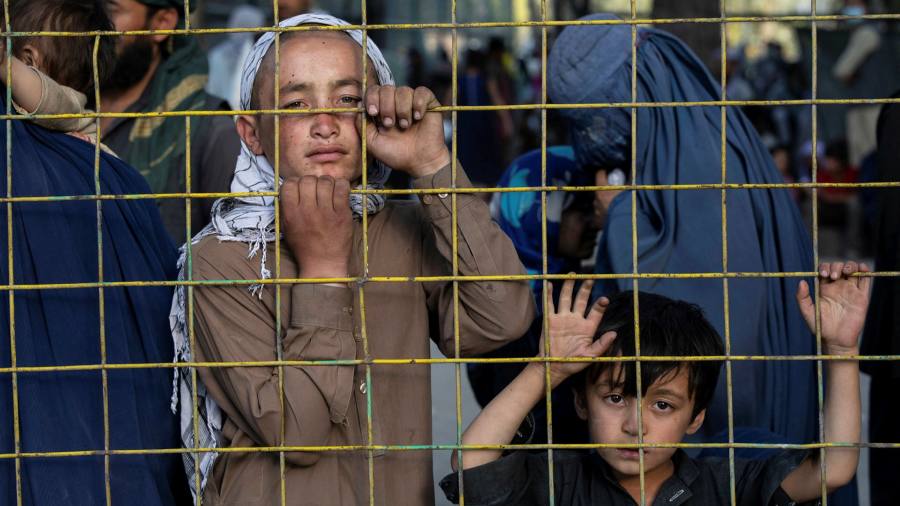 Residents of Kabul, the capital of Afghanistan, are bracing for a potential onslaught from the Islamist Taliban fighters, as the embattled president vowed to “remobilise” the disintegrating armed forces.

With the Taliban in control of half of the country’s provincial capitals after a lightning offensive this week, Ashraf Ghani, the president, on Saturday sought to bolster crumbling public morale in a brief, pre-recorded television address.

“Remobilising the security and defence force is our top priority and required measures are under way for this purpose,” he said. “My focus is to prevent further instability, violence and displacement of my people.”

Taliban militants, who want to impose a strict Islamic law on the Afghan population, have dramatically altered the country’s political map over the last week, seizing control of Kandahar and Herat, Afghanistan’s second- and third-largest cities, respectively, and encircled the capital.

The Taliban on Saturday morning launched a major multipronged assault on the strategically significant city of Mazar-i-Sharif, a day after they overran Puli Alam, the capital of eastern Logar province, just 70km south of Kabul.

Ghani, a former World Bank official, has been under intense pressure from neighbouring Pakistan, which has close ties with the Taliban, to resign and pave the way for a power-sharing arrangement with the Islamist group.

In his address on Saturday, he said he had begun “widespread consultations” with Afghan political leaders and foreign governments to stop the “imposed war” from bringing further bloodshed and destruction.

Many educated Afghans — especially those that co-operated with foreign governments — are scrambling to escape the country, fearing reprisals if the Taliban takeover the capital.

Displaced families from smaller towns have been pouring into Kabul seeking refuge from Taliban control, after the militia reportedly seized young girls and women for forced marriages in their newly captured territory.

The speed of the Taliban’s territorial grabs, often meeting little resistance, — as many Afghan troops surrendered after negotiations with the insurgent group’s forces — has left residents of the surrounded capital in despair.

“My family is having discussions on what to pack, what to sell, what to leave behind and what routes to take out of Kabul.”

The arrival of 3,000 US troops and 600 British soldiers in Kabul this weekend could deter an immediate Taliban assault on the capital, though US military officials said the deployment was to assist with evacuations of US diplomats and their Afghan allies, not a combat operation.

“Three thousand is a fair old number,” one Kabul-based security analyst told the Financial Times. “I wonder if they are reinserting them to at least give food for thought to the Taliban about whether trying to take Kabul is a good idea.”

Many educated Afghans, particularly women, expressed anguish, fear and rage at the country’s rapid unravelling, and especially at the abrupt US withdrawal that had inflicted serious damage on the morale of the Afghan armed forces.

“Today, everything has changed,” said Sara Wahedi, a former Afghan government official and chief executive of Ehtesab, a fledgling security app. “My family is having discussions on what to pack, what to sell, what to leave behind and what routes to take out of Kabul.”

“This moment feels final,” Muska Dastageer, a lecturer in political science at the American University of Afghanistan, wrote on Twitter. “Tens of millions of us will never recover. There was a belief in a future, in progress in a better tomorrow. And that is being crushed right now.”

Shafiqa Khpalwak, director of an Afghan foundation that promotes child literacy, said: “Everyone betrayed us. They kept us in the dark and they left us in darkness. I am sure that millions of Afghans feel the same.”

Human Rights Watch, the US non-governmental organisation, has appealed to the global community to open its doors to Afghans at particular risk, including high-profile women in public life, local employees of foreign governments, human rights activists and journalists.

“Foreign governments should prioritise providing visas and helping ensure safe passage for civilians that the Taliban may target for abuse because of their past work status,” the group urged.

Canada announced on Friday that it was expanding its resettlement programme to provide refuge for another 20,000 Afghans at the highest risk from the Taliban, but did not provide a timeline for doing so.