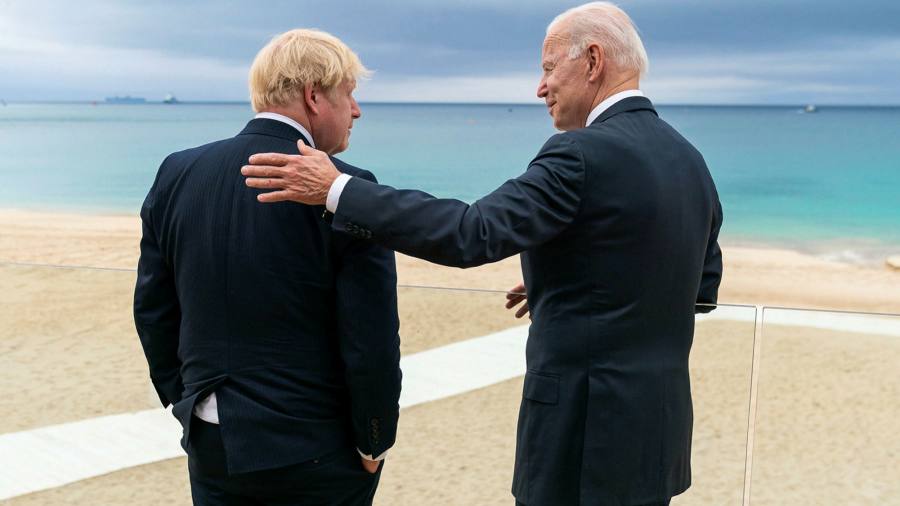 Sign up to myFT Daily Digest to be the first to know about UK foreign policy news.

The parallel with Suez may be inexact, but 65 years later the lessons for the UK are much the same.

Such was Washington’s fury at the Anglo-French attempt in 1956 to seize back control of the Suez Canal that Dwight Eisenhower’s administration cut international credit lines to London. Just to make the point, it then voted alongside the Soviet Union at the UN to condemn the UK’s military adventurism. Anthony Eden’s government promptly surrendered.

In Afghanistan the defeat is shared, and the anger is on the British side. The manner of the west’s scuttle from Kabul damages the Americans but humiliates their ally. The US is powerful enough to shrug off the blow.

The thread back to Suez is a relationship that, for Britons, has often looked as supine as special. After Brexit, Boris Johnson’s government hailed the UK as an independent actor on the global stage. The pullout from Afghanistan, where among allies the UK was the biggest contributor to the US-led mission, has revealed its utter dependence on Washington.

There have been plenty of bumps in the transatlantic relationship. Harold Wilson bravely rejected repeated pleas to send British forces to Vietnam. Richard Nixon’s administration froze intelligence co-operation when Edward Heath’s government dared to co-ordinate its policies with other Europeans before talking to Washington. Ronald Reagan did not ask Margaret Thatcher before invading the Caribbean island of Grenada, a British Commonwealth member state. The US has always counted interests ahead of sentiment.

Given his chumminess with Donald Trump, the populist Johnson was never going to be one of Joe Biden’s soulmates. His efforts to renege on the Irish border arrangements in the Brexit treaty with Brussels further angered a president proud of his Irish roots. For all that, Biden’s casual indifference to the impact of the Afghan retreat could scarcely have been more wounding.

Johnson set out his vaulting ambitions in an integrated review of foreign and defence policy. Free of its European straitjacket, “Global Britain” would rediscover the world. Policy would tilt towards the Indo-Pacific. The navy’s new aircraft carrier, the Queen Elizabeth, would be dispatched to the South China Sea. The government would invest in leading-edge technologies.

The review’s confident prose threw a cloak over the absence of any attempt to identify hard priorities and over a glaring mismatch between grandiose aspirations and limited resources. On close inspection it turned out that new ventures in cyber space would be paid for by downsizing the army and cutting back the Royal Air Force. Europe, unavoidably at the heart of the UK’s security interests, barely received a mention.

The Queen Elizabeth was supposed to serve as an emblem of national prestige. The snag is that the defence budget cannot bear the cost of sufficient F35 warplanes to sit on its deck. Carrying more aircraft flown by the US marines than by the RAF, it has become a metaphor for the UK’s unquestioning fealty to Washington.

Estrangement from Europe leaves Atlanticism as the only option. Where was “Global Britain” on the streets of Kabul, Johnson’s predecessor Theresa May asked scornfully, as the Taliban took control of the Afghan capital?

Suez broke Eden. The first lesson drawn by Harold Macmillan, his successor, was that henceforth the UK would exercise influence by claiming the role of America’s best friend. Macmillan soon enough concluded, however, that playing Athens to Rome in Washington should be balanced with a voice in Europe. So began the process that would see the UK join the EU.

Macmillan’s successors often framed Britain’s role as that of a bridge between Europe and the US, with influence in one amplifying its authority in the other. The split from the EU has all but blown up the European support. In reining back America’s role as the guarantor of global order, Biden has now withdrawn the US pillar.

For a nation such as Britain, rightly ambitious about the contribution it can make to international peace and security but, operating under unavoidable economic constraints, the facts of geopolitics are simple enough. It needs strong ties with the world’s most powerful democracy and influence on its own continent.

Johnson, deeply mistrusted in Berlin, Paris, Rome and Brussels and visibly disregarded in Washington, now finds himself standing, arms flailing, on a bridge to nowhere. Britain’s standing in the world is by no means beyond repair but the task of restoring it will fall to a future prime minister.