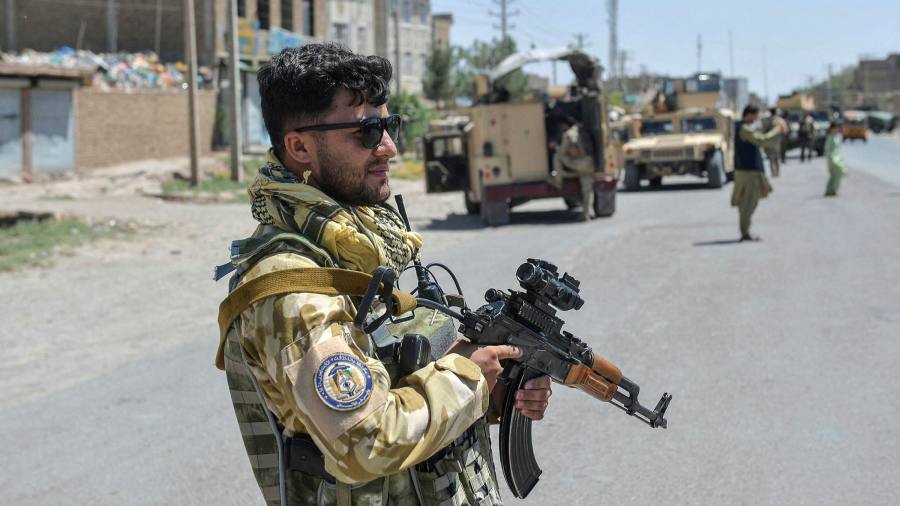 Just six weeks ago, Joe Biden seemed confident that the 300,000 men of the Afghan National Defence and Security Forces had the training, equipment and competence to hold off a Taliban takeover of the country after the US withdrew its military forces.

“The likelihood there’s going to be the Taliban overrunning everything and owning the whole country is highly unlikely,” the US president said in early July, as he affirmed his determination to complete the US pullout by Aug 31. “We provided our Afghan partners with all the tools — let me emphasise all the tools, training and equipment of any modern military.”

Yet despite the Afghan forces’ superior weaponry and training, Taliban fighters this week mounted a lightning offensive that enabled them to capture more than two-thirds of Afghanistan’s territory and reach the outskirts of the capital Kabul, often with little resistance.

The Afghan army troops simply melted away, stood down or retreated to their bases, despite the billions spent on their training and equipment by the US and its allies. In some cases, they left advanced weaponry to be seized by the motorbike riding, Kalashnikov-wielding Islamist militiamen.

Former western military officials and independent academics say the collapse of the Afghan armed forces reflects widespread public disillusionment with President Ashraf Ghani’s government, chronic corruption and mismanagement within the armed forces, and a sheer lack of confidence among the troops that they could win against the Taliban without US military and intelligence support. A handover ceremony from the US army to the Afghan national army, in Helmand province, south Afghanistan, in May © Afghan Ministry of Defense Press Office via AP

“The problem with the army was not lack of training or weapons. The most important thing in war is politics,” said Mike Martin, a former British army officer and author of a book about Afghanistan’s decades-long conflict, An Intimate War.

Martin said that Ghani, a World Bank technocrat who wrote a book on reconstructing failed states before he was elected president in 2014, lacked the political skills to keep the country’s many different ethnic groups loyal to the idea of a national cause.

When faced by an imminent US pullout, many Afghans’ more traditional ethnic, tribal and even family ties overshadowed any loyalty they might feel to the nascent Afghan army, enabling provincial Taliban commanders to negotiate the virtually peaceful surrender of many troops.

“The Taliban political franchise was able to peel off bits of the government because the government did not tend to its constituents enough — the tribes, clans, militias and ethnicities. That is the fundamental issue,” Martin said. “The army commanders just surrendered in return for amnesty, which the Taliban granted them and let them go home.”

Former US president Donald Trump’s February 2020 deal with the Taliban, combined with Biden’s determination to adhere to it without a well-planned military transition plan, emboldened the Taliban and hit the morale of the Afghan armed forces just as the country was beginning its fighting season. This generally runs from April to October, before winter leaves much of the country snowbound.

Ali Yawar Adili, country director of the Afghanistan Analysts Network, said Afghan troops were deeply rattled by the abrupt manner in which US logistical and air support was withdrawn. Many Afghans — including Ghani — never expected that. Elizabeth Threlkeld, a former US state department official and now a senior official at the Stimson Centre in Washington, said the Taliban’s rapid advance and the peaceful surrender of some army units had encouraged many others to follow suit.

“It takes on an air of inevitability,” she said. “If you’re in one of those provincial capitals that remains, you have to ask yourself, ‘what am I fighting for and what are my odds of success?’ What we’ve seen is [Afghan troops] recognising the writing on the wall and taking steps to protect their own interests rather than putting up a fight.”

A former senior US military official said that the Afghan Air Force was especially hard hit by the departure of over 15,000 contractors who used to help keep US-provided planes and helicopters flying.

“Its [the air force’s] operational readiness is being degraded as it is being pushed all over the country trying to respond to different desperate situations,” the official said. “Once the troops realise no one is coming to the rescue . . . they will desert, flee, or surrender.”

Not all Afghan forces have given up without resistances. Special Forces commandos fought hard and held the line against the Taliban in some cities, like Lashkar Gah, until they were withdrawn. But they were simply too few to stave off the nationwide onslaught.

Meanwhile, the armed forces have been plagued by corruption, such as the issue of ‘ghost soldiers’ who exist on paper but are not real — allowing others to collect their salaries.

Although there are officially 300,000 Afghan troops, Threlkeld said that “it’s fair to say that in reality there are far fewer.”

But what also contributed to the collapse is the Ghani government’s denial that Biden would indeed withdraw the last US troops and their military contractors from Afghanistan this year — and its resultant failure to prepare.

“Ghani and those around him just couldn’t believe that the Americans had just deserted them like that,” said Pakistani analyst Ahmed Rashid, author of several books on central and south Asia. “There was this hope that the worse the situation became the more obvious it would be that they had to stay.”