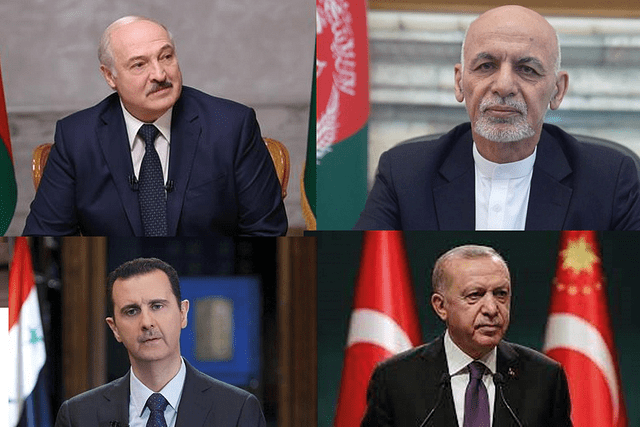 Belarusian President Alexander Lukashenko tops the list of those involved in organized crime and rampant corruption throughout 2021.

The Organized Crime and Corruption Reporting Project (OCCRP), a Bosnian and Herzegovina-based organization funded by the United States, has listed the “best of the year” as corrupt. It consists of institutions investigating corruption and criminal activities, the media and investigative journalists. The list was published on the OCCRP website on Tuesday.

The OCCRP said they and their partner organization’s investigative journalists, editors and readers and viewers were asked to name those involved in organized crime and corruption in 2021. The names of 1 thousand 18 people were submitted in it. A six-member OCCRP panel of judges declared Lukashenko the “corrupt man of the year” after scrutiny.

During the outgoing year, Lukashenko and his family members were involved in embezzlement of government funds, the OCCRP said. In May, Belarusian security forces diverted a Ryanair flight to the Belarusian capital, Minsk, in violation of international aviation rules on its way from Athens, Greece to Lithuania. Shortly after landing at Minsk airport, the passengers of the flight and journalist Roman Protasevich, a fierce critic of the Belarussian government, and his girlfriend Sophia were arrested. Lukashenko was sharply criticized for this incident.

Lukashenko is also embroiled in a border dispute with the European Union (EU). He is also blamed for the extreme suffering of Western European migrants on the Belarusian border. The leader is accused of brutally cracking down on dissidents, concealing the true nature of the corona infection in the country and spreading false news. Lukashenko, 6, has been in power in Belarus since 1993.

Meanwhile, after the Taliban took control of Kabul on August 15, Afghan President Ashraf Ghani and other top officials of his administration fled the country. Drew Sullivan, co-founder of the OCCRP and an investigative journalist, said of ousted Ashraf Ghani: Not only was he involved in corruption; On the contrary, he has fled abroad leaving the people of his country in the face of misery and death.

According to the OCCRP website, Bashar al-Assad has been waging a civil war in Syria for years. He has embezzled billions of dollars from the state. Erdogan’s government has also been accused of buying fuel oil from Iran using Chinese funds through state-owned banks. Sebastian Kurzs is facing serious charges of embezzlement and bribery.

The US Agency for International Development (USAID), the US State Department, the Swiss government, the International Center for Journalists (ICFJ), Google Ideas, and the Open Society Foundations (OSF) fund the OCCRP. This organization was established in 2006. The organization has received various regional and international awards, including the European Press Price Award in 2015.