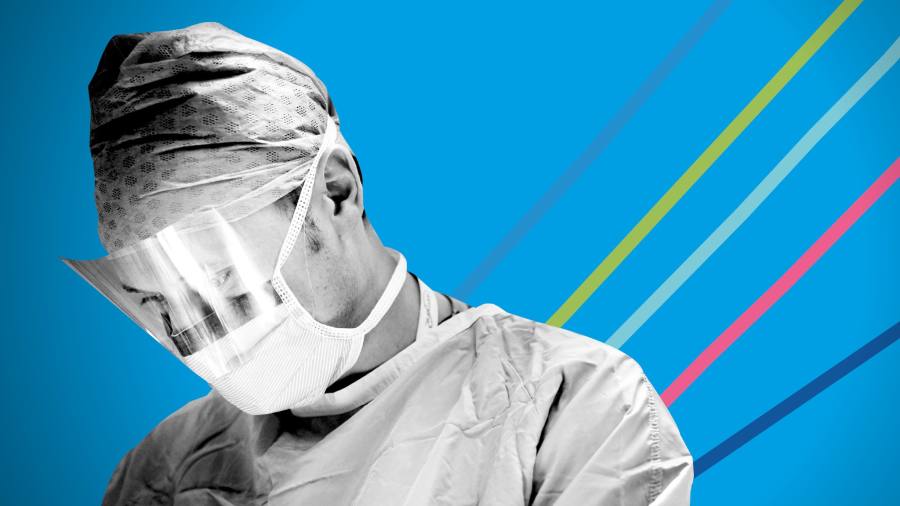 Sign up to myFT Daily Digest to be the first to know about UK government spending news.

Queues for NHS treatment in England risk spiralling even higher by the next election, despite Boris Johnson’s move to raise taxes in an effort to solve a crisis for waiting lists, a leading think-tank warned on Wednesday.

The Health Foundation’s calculation that the sum allocated by the prime minister will fall far short of what is required to clear the treatment backlog — which stands at 5.5m patients — will fuel concerns that the NHS will consume most of the funding secured through higher taxes, with little left over to bolster the creaking social care sector in England.

That in turn raises the prospect of more tax rises being required to give Johnson’s promised uplift to adult social care. The Institute for Fiscal Studies, another think-tank, said the NHS could swallow most of the funding obtained through Johnson’s tax increases.

The prime minister has proposed raising national insurance by 1.25 percentage points of salary for both employers and employees from April 2022 to secure £36bn over three years for the NHS and social care.

On Tuesday he announced £25bn for NHS England, £5bn for healthcare elsewhere in the UK, and £5.4bn for social care. He said more money would be released for social care in subsequent years.

Anita Charlesworth, director of research at the Health Foundation, pointed out that former prime minister Tony Blair’s successful push to cut waiting lists in the early 2000s had been on the back of an average 6 per cent annual increase in health funding over five years.

The document that accompanied the government’s announcement on Tuesday lacked specifics about the timetable for reducing the treatment backlog accumulated during the Covid-19 crisis and restoring the NHS’s pre-pandemic target that the vast majority of people should wait no more than 18 weeks.

Charlesworth pointed to huge uncertainty about how many of the estimated 8m patients who have stayed away from the NHS during the pandemic would ultimately seek healthcare.

She said the government had “committed to an increase in the amount of activity the NHS is doing but they’ve resisted making any commitment, or even saying what they think the extra money will achieve, in terms of waiting lists and waiting times”.

If 75 per cent of the “missing” patients sought treatment, it could cost £17bn to restore 18-week waiting times, said Charlesworth, noting the government had instead provided £10bn between 2021-22 and 2024-25 to tackle the backlog.

If the £17bn was found, a severe NHS workforce squeeze would push up the “unit cost” of each procedure through staff overtime costs and the need to buy capacity at premium rates in the independent sector, she added.

Even holding waiting lists at the current level of 5.5m patients would cost £13.3bn, according to Charlesworth’s calculations. “In all probability we will find ourselves at the next general election with a longer waiting list than we have at the moment — not a shorter one,” she said.

Ben Zaranko, an IFS research economist, said history suggested that the latest NHS spending plans would have to be topped up further. “That could leave little if any of the tax rises announced [on Tuesday] available for social care,” he added.

The government said on Wednesday that it would use new technology and different ways of working in the NHS to treat around 30 per cent more patients needing elective care in England by 2023-24. General practitioners’ surgeries, for example, would use artificial intelligence to help prioritise patients and identify the right level of support for those on waiting lists.

Sajid Javid, health and social care secretary, said the pandemic had presented enormous challenges for the NHS. “We are going to harness the latest technology and innovative new ways of working . . . to tackle waiting lists,” he added.

Whitehall officials said the “known unknowns” about how many people would ultimately come forward for treatment meant it was not possible to give a specific timeframe for clearing the treatment backlog.

However the government had committed massive resources to ensuring predictions that waiting lists might reach 13m were not realised, they added.

The officials stood by the plans to shift further funding to the social care sector once the backlog was cleared. 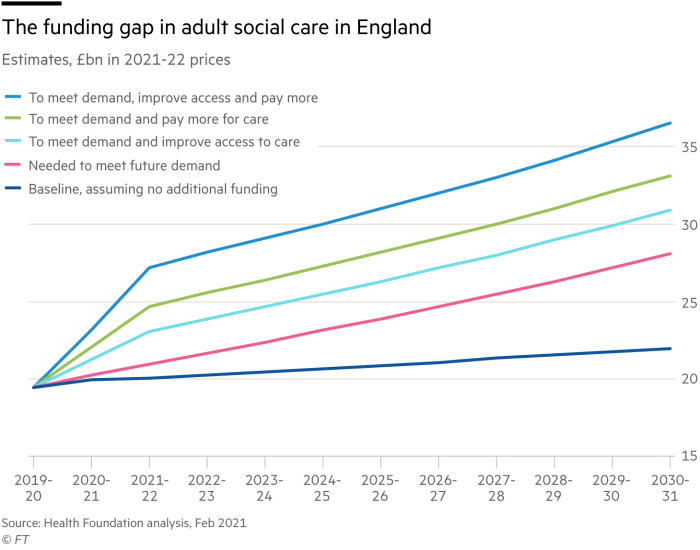 However, asked whether the money for the NHS was likely to be diverted to social care after a few years, Sally Warren, director of policy at the King’s Fund, the health and social care research organisation, said: “I think it’s fair to say that it would be a brave prime minister that would take £5bn to £8bn from the NHS just around the time of an election, just to give it to social care, so that is a real worry for us.”

She told an event organised by the Resolution Foundation, a think-tank, that this would present difficult choices for future governments with the likelihood that taxes would need to rise again to fund the rights on social care that people would acquire under Johnson’s reforms. These include placing an £86,000 cap on the amount anyone will pay for care costs from October 2023.

In the social care sector, there was gloom about the likelihood of securing the resources needed to prop up a threadbare system.

Martin Green, chief executive of Care England, which represents care providers, said: “The history is very, very poor of the NHS giving money to social care . . . Unless the government forces it across, I don’t think the NHS will give it across willingly.”