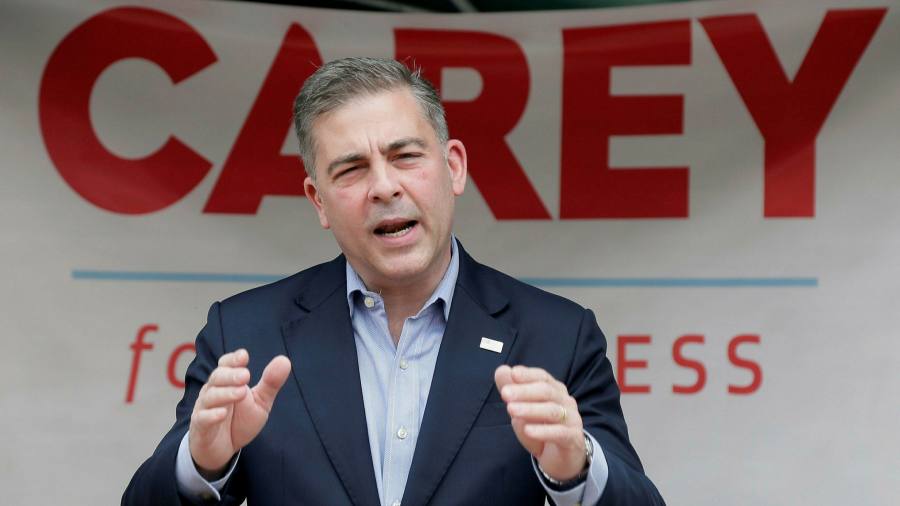 Sign up to myFT Daily Digest to be the first to know about Republican Party US news.

Donald Trump’s grip on the Republican party was bolstered on Tuesday when a coal lobbyist endorsed by the former president defeated 10 fellow Republicans in a closely watched special election in Ohio.

Trump, who was banned from all major social media platforms over his supporters’ attack on the US Capitol on January 6, has sought a return to the political stage ahead of next year’s midterm elections, when control of the US Senate and the House of Representatives will be up for grabs.

The 75-year-old former president has not ruled out running for the White House again in 2024, and the latest Federal Election Commission filings show he entered the second half of this year with a war chest of more than $100m.

In recent months Trump has endorsed candidates in races across the country, including Mike Carey, who was one of 11 Republicans vying on Tuesday for the party’s nomination in a special election in Ohio’s 15th congressional district, an area that spans much of the Columbus suburbs. The seat had been held by Republican Steve Stivers, who resigned in May to run the Ohio Chamber of Commerce.

The Associated Press called the race for Carey some 90 minutes after the polls closed. With two-thirds of precincts reporting, the lobbyist had more than 37 per cent of the vote — almost triple the share of his closest opponent, who had under 14 per cent.

“Great Republican win for Mike Carey. Big numbers! Thank you to Ohio and all of our wonderful American patriots,” Trump said in a statement released late Tuesday by his Save America political action committee.

Trump first endorsed Carey, chair of the Ohio Coal Association, in June. His stamp of approval boosted the name recognition of the political novice and longtime lobbyist who was for years an associate of Bob Murray, the late energy executive.

Murray was the founder and chief executive of Murray Energy, an Ohio-based mining company that filed for Chapter 11 bankruptcy in 2019 and is now known as American Consolidated Natural Resources. The company donated millions of dollars to Trump, his political campaigns and affiliated super PACs while Carey was its vice-president of government affairs.

When Trump endorsed Carey in June, he called the lobbyist a “courageous fighter for the people and our economy”. Weeks later, the lobbyist joined Trump at a fairground in Wellington, Ohio for the president’s first rally since leaving the White House. Trump’s fundraising vehicles funnelled about $400,000 to supporting Carey, who has raised more than any other Republican candidate in the race.

Trump and his allies welcomed the result in Ohio, which came just one week after Susan Wright, another Trump-endorsed Republican, lost a run-off race in Texas’s sixth congressional district. Wright came up short against fellow Republican Jake Ellzey in a result that raised nationwide questions about whether Trump is still a kingmaker in the Republican party. Wright, the widow of former congressman Ron Wright, lost to Ellzey by six points.

Carey will face Democrat Allison Russo in a general election in November.

Video: Where does the Republican party go after Trump?

The Columbus area race was one of two hotly anticipated primaries being held in Ohio on Tuesday. A Democratic primary also took place in the state’s 11th congressional district, an urban area that includes parts of Cleveland and Akron. The result was too close to call in the immediate hours after polls closed on Tuesday.

The contest was held to fill a vacancy created earlier this year when former Democratic congresswoman Marcia Fudge resigned to join Joe Biden’s administration as US secretary of housing and urban development.

The Democratic primary has underscored the divisions in Biden’s party between centrists and progressives. Shontel Brown, a local Democratic party chair, and Nina Turner, a co-chair of Bernie Sanders’s 2020 presidential campaign, were widely seen as the front runners in a crowded field of more than a dozen candidates.

Sanders campaigned for Turner, while Brown was endorsed by Jim Clyburn, the veteran South Carolina congressman whose support was seen as vital to Biden’s own presidential campaign.