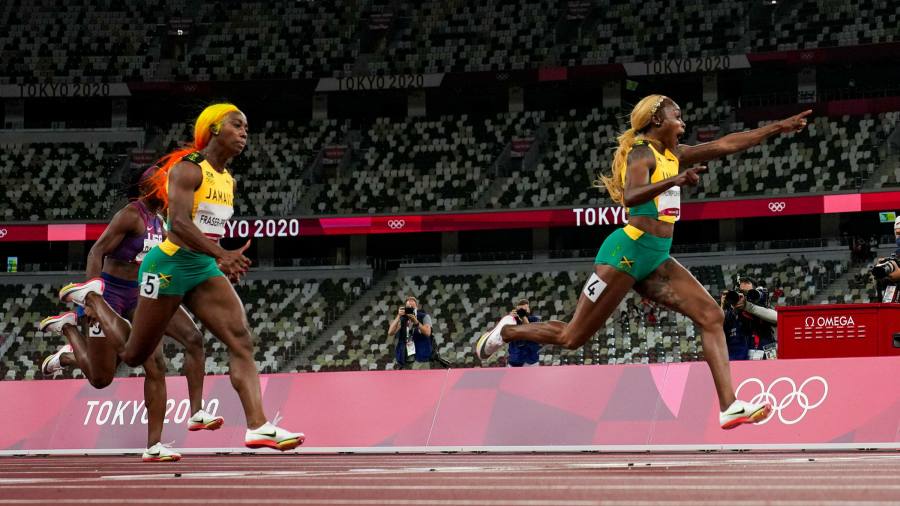 Stunning victories and emotional triumphs accompanied the slew of world records in athletics that have fallen at this week’s Olympic Games.

But some extraordinary performances also fanned the debate that rages in the sport over the sources of such results, prompting questions over the shoes worn by the athletes to the track itself, as well as the effectiveness of doping control.

Tokyo medallists were divided over the role played by new technology and rule changes. “It’s my training of course. Doesn’t matter, the track or the shoes,” said Elaine Thompson-Herah, the Jamaican who joined Usain Bolt as the only athletes to retain the 100m and 200m golds at consecutive Olympics. Her winning time in the 100m broke the Olympic record of Florence Griffith-Joyner set in 1988.

Others such as Dalilah Muhammad, the US hurdler, agreed the new track at Tokyo’s National Stadium contributed to her success. “It truly felt fast, as a 400m hurdler you can tell how fast a track is by how easily you’re making your steps between the hurdles,” she said after claiming silver.

Norway’s Karsten Warholm, who smashed the world record in taking 400m hurdles gold, blasted the specifications of his rivals’ shoes as “bullshit”.

The debates stem from a confluence of new regulations and technological developments in recent years.

The Tokyo track is made up of layers of vulcanised rubber with “air-filled chambers”, which “act like bowstrings, projecting athletes up and forward”, according to manufacturer specifications.

Shoe manufacturers have also been scrambling to compete with Nike, which in 2016 introduced footwear with carbon-fibre plates, propelling its sponsored athletes to jaw-dropping world records in long-distance races.

The same technology has since been incorporated into middle-distance and sprint spikes, forcing governing body World Athletics to introduce a sophisticated regulatory framework for the footwear used in competition.

“My natural instinct is not to try and strangle innovation,” said Sebastian Coe, World Athletics president, reflecting on the competition in Tokyo from the upper levels of the stadium this week.

“Of course there’s a balance. We need to make sure we’re not allowing designs or materials that really transform the sport into something we don’t recognise [but] I don’t think we’re there. At this moment I think we’re in about the right place.”

In the original run-up to the Tokyo Games — before the pandemic-related postponement — footwear engineers rushed to develop spikes and shoes that could rival Nike’s products, namely its VaporFly 4%, so-called because the company says it improves performances by that threshold.

According to statistics kept by World Athletics, world records have been set in more than two dozen events run by men and women on the track and the roads since Nike’s carbon-fibre footwear was introduced in 2016, not counting those set in Tokyo.

As athletes began vying for a place in Tokyo, competing brands that sponsor professional runners quietly began letting them race in Nike shoes, as Swiss shoe company On did for British marathoner Chris Thompson.

“As you probably heard”, Nike chief executive John Donahoe said on a results call in June, “our spikes are creating dominant performances . . . not only for Nike athletes but for competitors as well”.

Still, the one-year delay to the Games conferred an unintended benefit for competing companies, affording them another year to hone their products.

Coe pointed to the world-record performances of Warholm and Sydney McLaughlin, who took the women’s 400m hurdles gold. They ran in spikes made by Puma and New Balance, respectively, to counter the notion that Nike had an unfair advantage.

Warholm said he worked with Puma and carmaker Mercedes “to make a shoe that would give credibility to the results” but took issue with the spikes worn by rivals. “If you want cushioning, you can put a mattress there, but if you put a trampoline there I think it’s bullshit,” he said after his race.

The long-running controversy over drugs misuse has again raised its head in Tokyo. The pandemic lockdowns presented a logistical quagmire for athletics’ sprawling anti-doping controls. “It’s been a challenge, in the early rounds nobody was able to get anywhere” to conduct tests, Coe said.

The Athletics Integrity Unit, an independent authority set up to manage anti-doping and other integrity issues in the sport, said last week that 18 athletes entered by their respective nations had been deemed ineligible because they had not submitted to a minimum number of drugs tests.

Of those, 10 were Nigerian athletes who had already travelled to Tokyo to compete, before being told of their ineligibility. Several, including discus thrower Chioma Onyekwere, staged a protest in the athletes’ village before being sent home, saying: “We feel robbed.”

“I’m not going to say anything disrespectful, but it’s not a vintage crop of men’s 100m runners,” he said of the podium in Tokyo.

If there was a rule change that yielded perhaps the most heartwarming unscripted moment of the Games, it was the provision that allowed high jumpers Mutaz Essa Barshim of Qatar and Gianmarco Tamberi of Italy to share gold.

“I wasn’t even aware of this but it was a rule change from 2011, probably one of those things that went through just before lunch,” Coe said after witnessing ebullient celebrations by the Italian in particular.

He added: “I woke up thinking I was going to get a fusillade of complaints, but all I got was ‘this was the most spiritually uplifting thing I’ve seen all year’.”