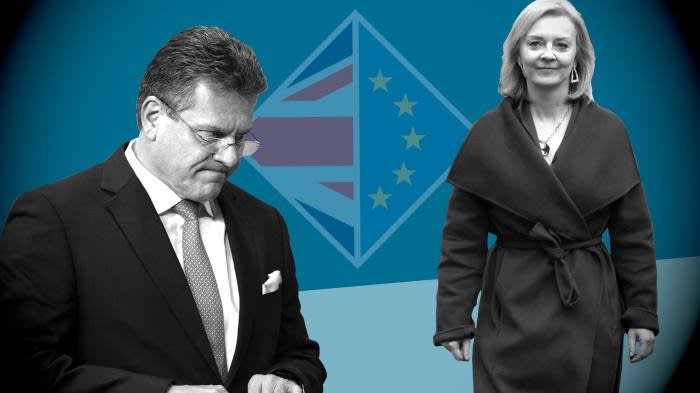 This article picked by a teacher with suggested questions is part of the Financial Times free schools access programme. Details/registration here.

Edexcel: Component 4.3: The aims, role and impact of the European Union (EU) on UK government

AQA: Component 3.1.2.5: The European Union: the impact of the EU on UK politics and policymaking

Background: what you need to know

The article focuses on a seemingly intractable problem which has resulted from the Brexit process. In order to avoid a ‘hard border’ between Northern Ireland and the Irish Republic, the Johnson government agreed to checks on goods passing from Britain to Northern Ireland, effectively keeping the latter within the EU’s single market structure.

The UK government is now seeking to amend this agreement, which has caused difficulties for British trade and is also strongly opposed by the Democratic Unionist Party in Northern Ireland. As the article explains, there are limits to the willingness of the EU to compromise on its oversight of the border. Finding a solution to this issue is the challenge facing Liz Truss, the Foreign Secretary, and the EU negotiators.

Click to read the article below and then answer the questions:

Brexit deadlock: Will the UK and EU agree a deal on Northern Ireland?

Depending on the examination board you are following, now answer one of the following questions.

Question in the style of AQA Politics Paper 1

Question in the style of Edexcel Politics Paper 2

Evaluate the view that withdrawal from the EU has had mainly negative consequences for UK governments.

In your answer you should draw on relevant knowledge and understanding of the study of Component 1: UK politics and core political ideas. You must consider this view and the alternative to this view in a balanced way. [30 marks]

TIP: For the Edexcel question, a relevant Component 1 topic could be Component 2: Political parties. The article mentions the pressure put on the UK government by the Democratic Unionist Party to abolish the Irish Sea border. This is a good example of how a minor party can exert significant influence over the UK political process.