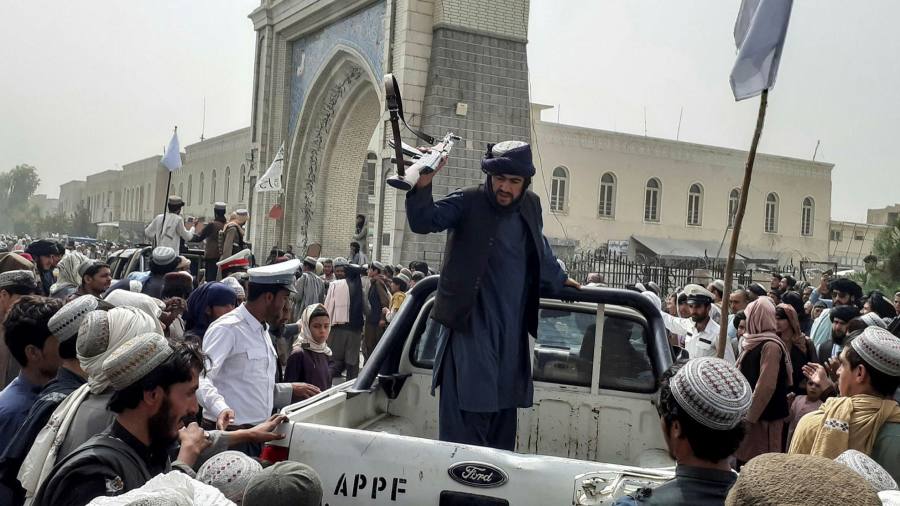 Afghanistan’s beleaguered president, Ashraf Ghani, fled the country on Sunday afternoon, after Taliban fighters reached the gates of Kabul, poised for an imminent takeover of the city, Afghan leaders and regional officials confirmed.

As night fell, the Taliban fighters — who want to rule Afghanistan by a strict, literal interpretation of Islamic law — were establishing their control of the capital, even as the US and other foreign governments used helicopters to ferry their personnel from embassies to the airport.

The Taliban stated on Sunday that its fighters would not “enter the city by force”, and that talks were under way on a transition “in a secure environment to prevent harm to the people”, Afghanistan’s Tolonews reported.

In the evening, Hamid Karzai, the country’s former president, said he and Abdullah Abdullah, the chair of the national reconciliation council, were in talks with the Taliban for a peaceful handover, while Taliban fighters had taken over abandoned city police stations and posts.

Ghani had been left politically and militarily isolated after a lightning offensive in which the Taliban established control over most of the country — often with little resistance — in an astonishing reordering of Afghanistan’s political map.

“The Taliban has entered Kabul,” Bill Roggio, editor of the Long War Journal, tweeted on Sunday night. “The Taliban took over the presidential palace, the police command and other installations. Kabul will effectively fall today.”

US president Joe Biden announced late on Saturday that Washington would increase its deployment to 5,000 troops to support the evacuation of diplomats, allied personnel and thousands of Afghans at high risk of retribution for working with the US. He also affirmed plans to withdraw troops by the end of the month.

The Taliban has entered Kabul. The Taliban took over the presidential palace, the police command and other installations. Kabul will effectively fall today [Sunday]

Biden said Washington had warned the Taliban that “any action on their part, on the ground in Afghanistan, that puts US personnel or our mission at risk there, will be met with a swift and strong military response”.

As the US evacuation got under way, embassy staff were instructed to burn sensitive documents. Chaotic scenes were later reported at Kabul airport on Sunday night as desperate Afghans clamoured to board flights out. Earlier in the day, Kabul residents had thronged banks in a bid to withdraw their savings.

Biden said that the US was working with Ghani and other Afghan political leaders, as well as regional powers, “as they seek to prevent further bloodshed and pursue a political settlement”.

Karzai and Abdullah were expected to travel to Qatar for negotiations with the Taliban. However, local journalists reported that their trip was cancelled after Ghani’s departure, which effectively conceded the city to the Taliban fighters gathered at the gates.

Country specialists warn that Afghanistan, with its diverse mix of rival ethnic groups and fierce community rivalries, is heading towards a civil war.

“This is the end of Afghanistan as a nation,” Sara Wahedi, a former Afghan government official who runs a security app for Kabul residents, wrote on Twitter. “No one will be able to lead the entire country.”

Afghanistan’s vice-president, Amrullah Saleh, who has also reportedly left the country — and whom many believe will mount a future armed resistance, struck a note of defiance on Twitter after his departure. “I will never, ever & under no circumstances bow to d [sic] Talib terrorists,” he wrote. “I won’t disappoint millions who listened to me. I will never be under one ceiling with Taliban. NEVER.”

I will never, ever & under no circumstances bow to d Talib terrorists. I will never betray d soul & legacy of my hero Ahmad Shah Masoud, the commander, the legend & the guide. I won’t dis-appoint millions who listened to me. I will never be under one ceiling with Taliban. NEVER.

The rapid disintegration of the Afghan National Army over the past week has stunned many in Washington who had expected the US-trained force to be able to put up stronger resistance to the Islamic insurgents.

The northern city of Mazar-i-Sharif, a traditional stronghold of fierce anti-Taliban resistance, fell to the insurgent group late on Saturday night after days of heavy fighting. Influential political figures in the region fled, including anti-Taliban leaders Abdul Rashid Dostum and Ata Mohammad Noor, who sought refuge in neighbouring Uzbekistan, according to local news reports.

Analysts said the abrupt pace of the US drawdown — including abandoning the main US military facility at Bagram air base virtually overnight — had severely damaged morale among the Afghan forces, undermining their will to fight.

“What we’ve underestimated is the level of Taliban planning with regard to the withdrawal,” Rudra Chaudhuri, a war studies lecturer at King’s College London, told the Financial Times. “They had a very clear plan. The question is, how did the entirety of the US intelligence community not know this?” But analysts also said that some of Afghanistan’s most battle-hardened military leaders had tactically retreated to regroup and were likely to launch fresh insurgencies in the future.

“If anybody thinks it’s going to be a peaceful rule for Taliban or Afghanistan is going to be under their completely control and domination — no,” an Indian government official told the FT. “There is always going to be this thorn in their backside.”

Many Afghans also expressed fury at the US focus on evacuating its own citizens, leaving the local population at the mercy of the Taliban and its extremist ideology. Afghan women, in particular, fear hardship under a Taliban regime, which severely restricted their freedom of movement and ability to work when it ruled the country in the 1990s.

“I wish I could go to Kabul now and scream outside the US embassy, ‘We are also human beings like you and we also have the right to live and enjoy freedom’,” said a young woman in Herat, which fell to the Taliban a few days ago. She added that the Islamist fighters had already begun searching people’s homes for alcohol or weapons.

“How could the Americans hand us over to the Taliban?” she said.

Antony Blinken, the US secretary of state, sought to deflect blame for the unfolding chaos, saying that Afghan security forces — despite years of investment and training — had proven to be “incapable of defending the country . . . and that did happen more rapidly than we anticipated.”