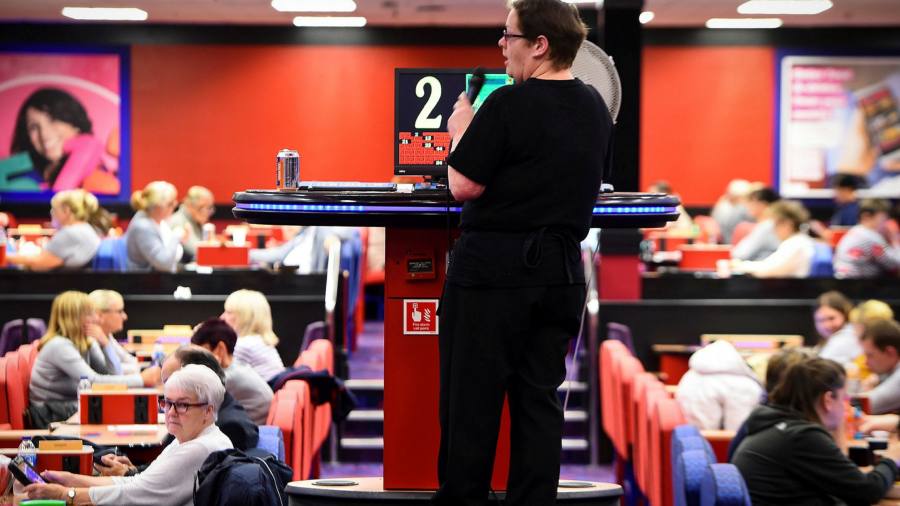 Sign up to myFT Daily Digest to be the first to know about Rank Group PLC news.

Rank Group, the owner of Grosvenor casinos and Mecca Bingo, has posted hefty annual losses after a year in which lockdowns and restrictions meant it “did not have a single day’s normal trading”.

The London-listed gambling group on Thursday said that revenues in the year to the end of June were down 48 per cent year on year to £329.6m, pushing it to a £107.3m pre-tax loss compared with a £13.4m pre-tax profit the previous year.

“Last year was rotten, we were shut more than we were open,” said chief executive John O’Reilly. “Across all of our venues we didn’t have a single normal day’s trading.”

Almost two-thirds of Rank’s revenues come from its casinos and bingo halls, which were closed for the majority of the past year, with the remainder generated online. Even when sites were able to open, the company was hit hard by government restrictions such as social-distancing rules that reduced capacity and a 10pm curfew that ran in England for several months in late 2020.

Half of the revenues in Rank’s Grosvenor casino business are made between 10pm and 5am.

The Grosvenor casinos are also reliant on high rolling customers from the Middle East and Asia for more than a quarter of sales.

O’Reilly said that the summer was usually the highest spending period in the casinos as “people escaping the heat of the Middle East come and play in our venues”.

Grosvenor’s nine London casinos, which are suffering from the lack of office workers and the extension of the central London congestion charge to weekends, make up 42 per cent of the brand’s revenues. There are 52 Grosvenor sites overall.

Rank’s Mecca bingo sites have suffered more heavily than the Grosvenor casinos thanks to bingo’s popularity among older consumers, a demographic that has been hardest hit by Covid. O’Reilly said that the average age of the Mecca visitor was 58 but that the group was trying to target younger punters by introducing alternative entertainment such as live music and training comic bingo callers through its own “academy”.

In November, Rank undertook a £70m equity raise and in April, it completed the sale of its Blankenberge casino in Belgium to the Swedish gambling group Kindred for £25m. O’Reilly said this had allowed the group to shore up its balance sheet. “We did well to navigate the pandemic in he way that we have done,” he said.

Trading in the weeks since the UK lifted all final restrictions was above break-even levels at both the Grosvenor and Mecca sites, Rank said.

Outside London and Scotland, where restrictions on indoor hospitality were lifted later, Grosvenor casinos were trading at 98 per cent of 2019 levels in the 13 weeks to August 15, it added.

Rank shares were down roughly 3 per cent in lunchtime trading in London.