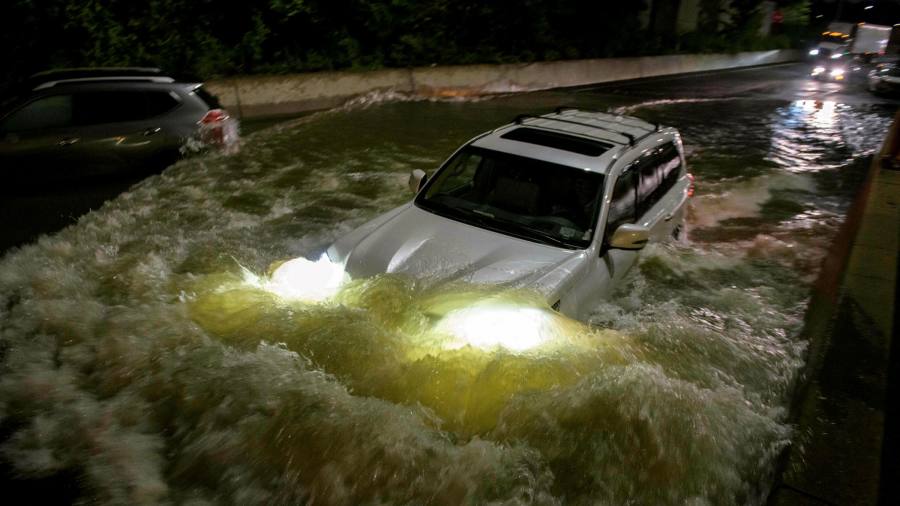 Sign up to myFT Daily Digest to be the first to know about Natural disasters news.

New York, New Jersey, and Pennsylvania were under a state of emergency after the remnants of Hurricane Ida delivered record-breaking rainfall and flash floods that killed nine people late Wednesday.

Close to 200,000 utility customers lost power due to the storm, and others were levelled by a tornado that touched down in Mullica Hill, New Jersey.

Hurricane Ida made landfall in Louisiana as a Category 4 hurricane on Sunday, the strongest storm to strike the area since Hurricane Katrina in 2005. Entergy, Louisiana’s largest electric utility, has restored some service but hundreds of thousands of people in storm-ravaged areas face weeks without power.

The storm’s ability to cripple the nation’s most densely populated area in a matter of hours showed how New York’s infrastructure remains ill-prepared for the stronger, wetter storms associated by climate change.

Images of water rising to the windows of parked cars, gushing down the stairwells of subway stations and spilling into the basements of homes were widely shared on social media.

The National Weather Service issued its first-ever flash flood emergency for New York City shortly after 9pm, saying that water rescues were already taking place. The storm also broke the record for the most rainfall observed in Central Park in a single hour, with 3.15 inches falling. The previous record was set less than two weeks ago by Tropical Storm Henri.

A travel advisory asking non-emergency vehicles to stay off the roads remained in effect on Thursday.

The insurance hit from Ida is expected to be substantial. Fitch Ratings predicted earlier this week that the overall cost to insurers and reinsurers could be between $15bn and $25bn, likely exceeding the impact of this year’s winter storm Uri, which had knocked out Texas’s electric grid, but still well below the $65bn hit from Katrina.

Boston-based catastrophe modelling firm Karen Clark & Company published a “flash estimate” of $18bn of claims from Ida, including $40m in the Caribbean and the rest in wind and storm-related losses in the US.

“It will take many months or longer for the financial view of this event to fully develop,” insurance broker Aon said on Monday. The uninsured costs will also be significant, it added, including damage to infrastructure as well as properties without flood cover.

The insurance industry is already reeling after the worst start to the year for natural catastrophes in a decade, as urban development and climate change effects combined to deal a $40bn first-half blow from events such as wildfires and winter storms. That was followed by more extreme weather in July, including floods in Europe that were estimated to be the region’s costliest weather event in decades.