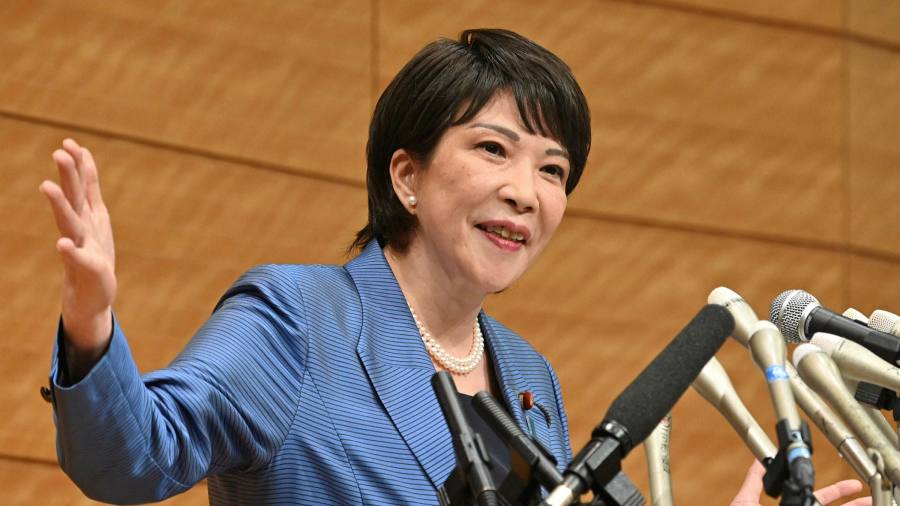 Sign up to myFT Daily Digest to be the first to know about Japanese politics & policy news.

Sanae Takaichi, a hardline nationalist with outspoken views on national security, has entered the contest to succeed Yoshihide Suga as she aims to become Japan’s first woman prime minister.

The former communications minister, 60, who has been endorsed by Suga’s predecessor Shinzo Abe, is one of Japan’s few prominent female politicians. But she is a divisive figure who has frequently visited the contentious Yasukuni war shrine and pushed for constitutional reform to strengthen Japan’s military capabilities.

Launching her campaign on Tuesday, she said if she was chosen to succeed Suga as leader of the ruling Liberal Democratic Party (LDP) she would stick to the Abenomics programme of her predecessors, which relies on aggressive monetary and fiscal stimulus.

Dubbing her plans as “Sanaenomics”, Takaichi proposed greater investments in crisis management so Japan could better address risks such as the pandemic, food security and cyber attacks.

She would also put on hold Japan’s goal of returning to a primary balance surplus by 2025 to prioritise hitting the inflation target of 2 per cent and refrain from raising the consumption tax to finance the stimulus measures.

“With this plan to make the Japanese economy resilient, I will rebuild the economy and put it on a path for growth,” she said at a news conference in Tokyo.

To address the coronavirus crisis, Takaichi said she would consider a new legal framework to enable lockdowns. While countries in Europe and elsewhere enacted compulsory lockdowns, social distancing in Japan has always been voluntary in part because of a constitutional right to free movement.

Suga resigned abruptly last week after his popularity collapsed due to his handling of the pandemic. Yet his exit after just a year in charge also sparked concerns that Japan would return to a period of political instability that preceded Abe’s term of nearly eight years.

Takaichi, who does not belong to a faction, does not rank high in popularity polls and few analysts believe she can win enough backing to beat other leading candidates such as vaccines minister Taro Kono and former foreign minister Fumio Kishida.

“We still don’t know how the contest will play out but so far, the majority view is that this will be a battle between Kishida and Kono,” said one LDP parliamentarian who belongs to a faction associated with Abe.

Still, with many of LDP’s powerful factions undecided on which candidate to endorse, Takaichi’s entry could divide critical votes.

She is the only female declared runner so far, but is unlikely to accelerate the advancement of women in Japan with her conservative views on gender.

She has long argued that married couples should keep using the same surname, a practice that women’s rights campaigners say violates their constitutional right to equality. She is also opposed to allowing female imperial succession.

The LDP will choose its next leader on September 29 through an electoral college, with its 383 MPs holding half of the votes and regional party officials making up the rest.

Whoever wins is almost certain to become the next prime minister since the ruling coalition controls a majority in parliament. A general election must then be held by November 30.