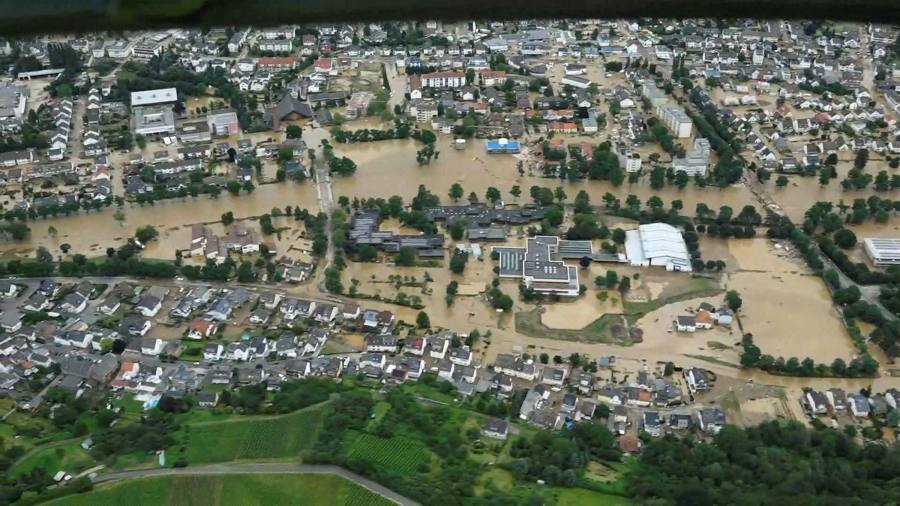 Extreme rainfall such as that behind last month’s devastating floods in Germany and Belgium will become more frequent and increasingly intense as climate change warms the planet, according to a study of the disaster by leading meteorologists.

Research by the World Weather Attribution initiative, an international group of experts, said the unprecedented rain that led to the deaths of more than 200 people in Germany and Belgium was between 1.2 and nine times more likely to happen today, compared with pre-industrial times.

Climate change has increased the amount of rain that could fall in that region in one day by 3-19 per cent, the study added. The range in both assessments was the result of limited historical data and the uncertainties inherent in computer modelling.

“These floods have shown us that even developed countries are not safe from the severe impacts of the extreme weather we have seen and [which will] get worse with climate change,” said Friederike Otto, one of the authors of the study and an associate director of Oxford university’s Environmental Change Institute.

The effects of human-driven climate change have become increasingly apparent. Europe recorded its hottest ever temperature this month when it reached 48.8C in Italy, wildfires tore across the Mediterranean region from Turkey to Spain, and floods wreaked havoc in parts of northern Europe.

The flooding in Germany, Belgium, the Netherlands and Luxembourg followed a massive downpour that dumped more than 90mm on the area around the Ahr and Erft rivers — the most rainfall there in a single day.

Climate change was “increasing the risk” of such extreme weather, said Maarten van Aalst, director of the Red Cross Red Crescent Climate Centre and another of the study’s authors. “If anything, we are expecting a higher chance of this happening next year than this year. We can expect this to happen again.”

The WWA study follows a landmark UN report this month that highlighted the likelihood of 1.5C of warming by 2040. It concluded that extreme weather events, such as the European floods, would become more frequent and intense with each fraction of a degree of warming.

The WWA said on Tuesday that if warming reached 2C above pre-industrial levels then the likelihood and intensity of an extreme rain event in western Europe would rise even further.

Last month, the WWA initiative made the striking pronouncement that this summer’s North American heatwave would have been “virtually impossible without human-caused climate change”.

The WWA findings are based on historical weather records and computer simulations that compare today’s climate with that of the past, before greenhouse gas emissions from human activities had driven up average global temperatures.

Since rainfall can be localised and highly variable from location to location and from year to year, the scientists analysed data from a region of Europe larger than the area hit by flooding in July.

So-called “attribution science”, which links individual extreme events to climate change, has grown in popularity in recent years as computerised models have made such studies more accurate and policymakers have clamoured for information to help them prepare for the future.