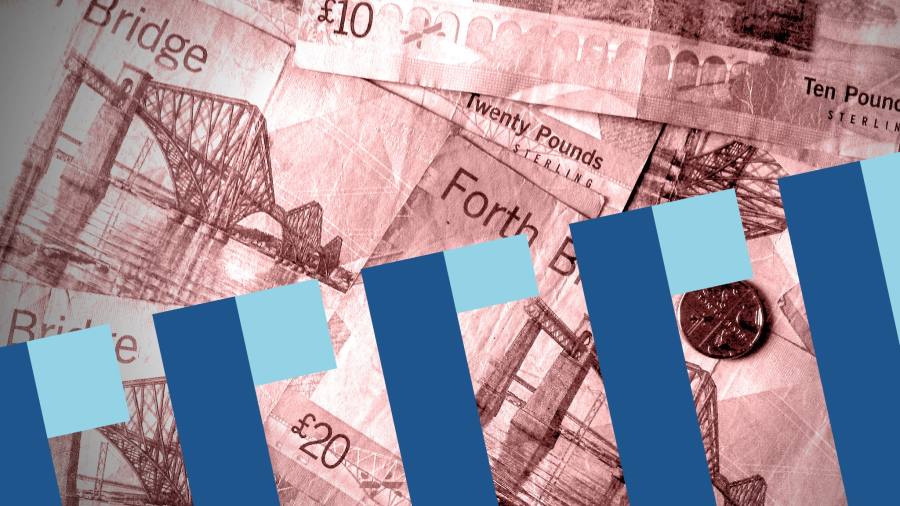 Scotland’s budget deficit ballooned to 22 per cent of economic output in 2020-21, highlighting the scale of the fiscal challenge the country would face if it became independent of the UK anytime soon.

The more than doubling of Scotland’s notional deficit to £36.3bn in the year to April 2021, outlined in official data released on Wednesday, was caused mainly by the huge increase in public spending during the coronavirus pandemic.

Scotland’s deficit for 2020-21, after a geographic share of UK North Sea oil and gas tax revenues was included, rose to 22.4 per cent of gross domestic product, according to the Scottish government’s annual report entitled Government Expenditure and Revenue Scotland. This compared with a deficit of 14.2 per cent for the UK as a whole.

The data also showed a relative fiscal weakening for Scotland. In the year to April 2020, Scotland’s deficit was 8.8 per cent of GDP, compared with 2.6 per cent for the UK. But the pro-independence Scottish National party government is expected in the next few months to resume its push for another referendum on independence after winning the May elections to the Edinburgh parliament on a pledge to try to hold such a vote by the end of 2023.

Kate Forbes, Scotland’s finance secretary, insisted the latest data on the deficit would not stop the SNP turning its focus back to independence after the coronavirus crisis.

“It is not an obstacle to making the case for independence because deficits across the world have risen exponentially,” she said.

But by estimating Scotland’s deficit to be more than 8 percentage points higher than that of the UK as a whole in 2020-21, the data provided potent political ammunition for opponents of independence who said leaving the Union would risk a severe squeeze on public spending.

“It is reckless beyond imagining to pursue a divisive and economically catastrophic referendum during the recovery,” said Jackie Baillie, deputy leader of the opposition Scottish Labour party.

The official figures, compiled by Scottish government statisticians, will increase pressure on the SNP to update its case for independence following the collapse of oil revenues since 2014 and the greater risk of trade disruption following the UK’s departure from the EU single market.

Mairi Spowage, director of Strathclyde university’s Fraser of Allander Institute, a research body, said the data provided a starting point for discussion about the choices an independent Scotland would have to make.

“It is not enough to say ‘Everything will be fine’ . . . Concrete proposals and ideas are needed,” she added. Economists said the larger rise in Scotland’s deficit compared to the UK as a whole over the past year reflected in part higher public spending north of the border with England and the hit to oil and gas industry production during the pandemic.

The official data capture tax revenues raised from Scotland and spending by both the administration in Edinburgh and the UK government on Scotland’s behalf, in areas such as pensions and defence.

Ahead of the 2014 independence referendum, the SNP government described the data as “the authoritative publication on Scotland’s public finances” that provided the “starting point” for analysis of the fiscal situation it would face as an independent nation.

In 2014, voters in Scotland rejected independence by 55 per cent to 45 per cent, but the SNP and Scottish Green party both want a second referendum and together command a majority in the Edinburgh parliament.

The Institute for Fiscal Studies, a think-tank, said that while the gap between Scottish spending and tax revenues would narrow sharply as the pandemic eased, the country’s structural deficit would not be sustainable in the event of independence.

“It would need to be tackled by some combination of spending cuts and/or tax rises, in the absence of much stronger economic performance, which is unlikely,” said David Phillips, IFS associate director.

The data highlighted the diminished revenues an independent Scotland could expect from the oil and gas industry.

An illustrative Scottish share of UK North Sea revenues was worth £0.5bn in 2020-21, down from £0.8bn the previous year because of the fall in oil prices during the pandemic. “The ‘Union dividend’, the combined value of higher spending and lower revenue, has increased to £2,210 per person,” said the opposition Scottish Conservative party.

Forbes said the data illustrated the failings of Scotland’s current constitutional place within the UK.

She declined to say whether an independent Scotland would seek to bring its deficit to a sustainable 3 per cent of GDP within 5 to 10 years of independence, as set out by an SNP commission of which she was a member in 2018.

Forbes accepted the SNP’s independence prospectus needed to be refreshed, but said it would be “premature” to do so while coronavirus cases were still high.

The post-independence loss of UK fiscal transfers could be offset by the ease with which developed countries are currently able to borrow from international capital markets.

But Phillips said the markets’ willingness to lend would depend on Scotland’s underlying finances and monetary regime, and independence might mean the loss of the Bank of England support that had helped keep UK interest rates low.

“Whether an independent Scotland could have borrowed as much and as cheaply is unclear,” he added.