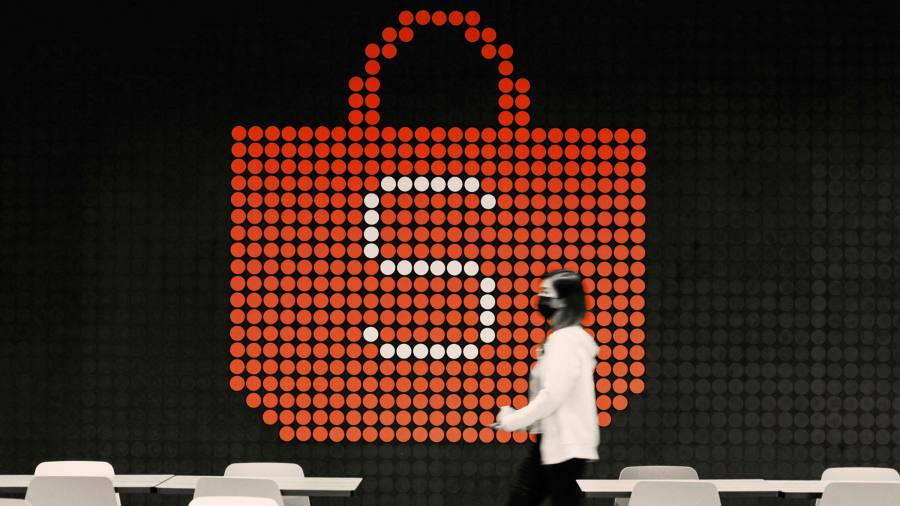 As part of a recent television advertising blitz in Brazil, south-east Asian ecommerce app Shopee replaced the words to the infectiously catchy “Baby Shark” tune with its own name.

The company, owned by Singapore-headquartered Sea, is hoping that the cringeworthy earworm will keep the platform top of mind for customers as it seeks to expand in Latin America’s $105bn online shopping market.

Sea, whose biggest shareholder is Chinese technology group Tencent, is backed by hefty financial firepower. Despite being lossmaking, its New York-listed shares have surged 680 per cent since the start of 2020 to give Sea a market value of almost $170bn, close to that of Shopify, as Covid-19 fuelled an ecommerce boom in south-east Asia.

But Sea’s attempts to replicate in Latin America the dominance it enjoys in its home region will face intense opposition in the form of MercadoLibre, the Nasdaq-listed group and market leader.

The potential prize for Sea, which was founded by Chinese billionaire Forrest Li, is huge. Before the pandemic, online shopping was in the early days of adoption in Latin America. But ecommerce sales surged 63 per cent in 2020, according to eMarketer data from Insider Intelligence, making it the fastest-growing region.

“If Sea can pull Latin America off and prove itself against MercadoLibre, this will have a far greater impact on their market cap and share price than anything else they are working on,” said Jianggan Li, chief executive of Momentum Works, a Singapore-based consultancy.

Shopee, launched in 2015, has been the underdog before. As a late entrant to online shopping in south-east Asia, it overtook Alibaba-owned Lazada in 2019 to become the region’s top ecommerce platform, dethroning local champions in various countries along the way.

Sea entered Latin America in 2017 with Free Fire, its battle royale video game that is now the highest-grossing mobile title in Latin America and south-east Asia. The company’s gaming division, which is profitable, is used to subsidise the unprofitable ecommerce unit.

It launched Shopee Brazil in 2019, initially only allowing people to buy items from merchants outside the country. It now offers access to local sellers and this year launched services in Mexico, Chile and Colombia.

There are already signs its push into the region is succeeding. Shopee is the most downloaded ecommerce app in Brazil this year, with more than double the number for MercadoLibre, according to Sensor Tower data.

Sea declined to comment on its Latin America strategy, but at its quarterly update last week, chief corporate officer Yanjun Wang said the company’s Brazil expansion was in its infancy.

“[Latin America] is still a very early stage for us as we continue to adapt to local market practices and . . . focus on growth,” she said. “We’re not looking at the competition per se because these markets [still have] a very low level of ecommerce penetration.”

Shopee’s strategy is centred around low-priced products on a platform that analysts have described as a “gamified” shopping experience. Simple games can be played within the app, through which users are able to win rewards such as discounts.

Lower fees are another lure. Despite recently raising rates, Shopee charges sellers among the lowest commissions compared with other leading platforms in Brazil for certain items, according to a recent Goldman Sachs report.

Luiz Claudio Dias de Melo at consultancy 360 Varejo believes importing some of the features that have made Shopee popular in Asia, such as live stream-selling, could help it in countries such as Brazil.

“Live streaming [in ecommerce] has barely started in Brazil. If you manage to reproduce it here, it could be a path to success.”

As well as rewards, Shopee’s platform drives engagement through video reviews and a chat feature where buyers and sellers interact.

But all of that may not be enough to conquer Latin America and topple MercadoLibre, which has a market capitalisation of $92bn and controlled 26 per cent of the region’s ecommerce market at the end of 2020, according to Morgan Stanley.

MercadoLibre was founded in Argentina in 1999, and its share price has nearly tripled since the start of 2020. Its net revenues grew almost three-quarters last year to just shy of $4bn.

“Brazil is the most competitive ecommerce market in the world,” said Fernando Yunes, the head of MercadoLibre’s Brazilian ecommerce operation. “It’s hard for international companies to win in this market.”

Walmart sold the majority of its Brazil unit in 2018 while Spanish company Glovo exited a year later.

Shopee will also have to contend with challenges specific to doing business in Brazil. The country suffers from burdensome bureaucracy, a highly complex tax system and poor transportation infrastructure.

“Dealing with the logistics to deliver goods is a significant obstacle in a country with continental size, heavy traffic and a need for infrastructure improvements including upgrades to basic mailing services that no longer address the needs of a fast-paced ecommerce market,” said Patrick Hruby, chief executive of Movile, the Brazilian tech group behind meal delivery app iFood.

MercadoLibre has built a logistics network that includes warehouses and covers about 90 per cent of its deliveries in Brazil.

Shopee, which was shipping 300,000 to 400,000 parcels daily as of May, according to one person familiar with the business, does not have delivery capabilities. The app relies on Brazil’s postal service, which has suffered a number of strikes over the past decade and whose service can be slower.

But Sea’s Wang said low ecommerce penetration in Latin America meant the group views the market as a “blue ocean”. “We see large opportunities and a very long runway for these markets,” she said.