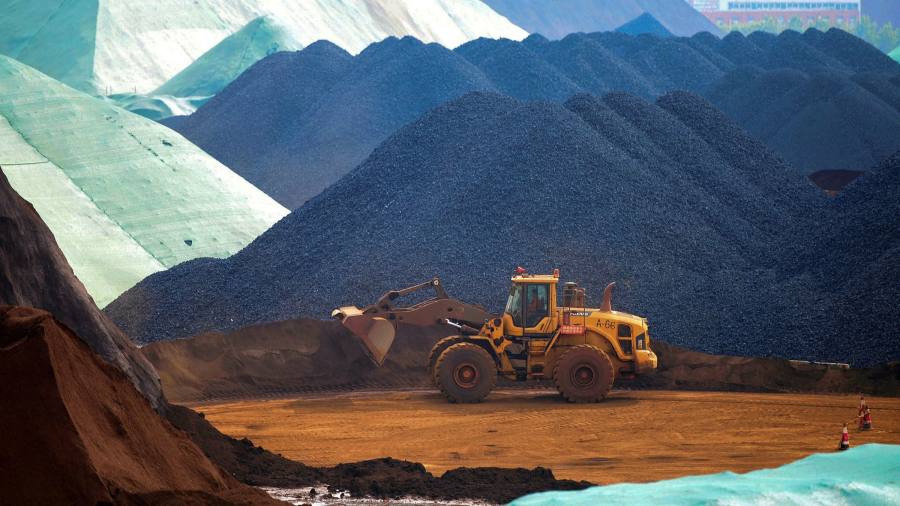 Sign up to myFT Daily Digest to be the first to know about Chinese economy news.

The price of the steelmaking ingredients that generate billions of dollars of profit for the world’s biggest miners have diverged sharply, underscoring China’s grip on global commodity markets and hinting at a pick-up in iron.

While iron ore has tumbled 40 per cent from its record high above $230 per metric tonne in May due to stricter enforcement of steel production curbs, the price of metallurgical coal imported into China soared, reaching $440mt this week, up from $230mt in May, according to an assessment from S&P Global Platts.

The yawning price gap has left investors wondering if iron ore, which is more exposed to speculative activity than metallurgical coal because it is a more easily tradable market, has fallen too far and could rally. It was trading at $140 on Thursday.

Given the two commodities are linked to the same end use, the divergence in price is surprising, said Colin Hamilton, an analyst at BMO Capital Markets, particularly in an environment where China is reducing steel production in an effort to reduce emissions.

“However, the real differential between the major steelmaking raw materials at the moment is supply,” said Hamilton. “China’s domestic coking coal output cannot simply cannot meet steel industry demand (particularly for low sulphur material) and the on-off nature of Mongolian shipments means planned imports, for now, are not riding to the rescue.”

China procured around a third of its coking coal from Mongolia in 2020 but border restrictions imposed because of Covid-19 have disrupted flows. At the same, a diplomatic spat has led Beijing to ban imports from Australia, while safety and environment restrictions have crimped domestic supplies.

According to Morgan Stanley, China’s coking coal imports were just 3.8m tonnes in July, down 9 per cent on the previous month and almost 50 per cent on a year ago.

“We do believe the iron ore price correction is a fair reflection of the current China steel demand situation, and that the [metallurgical] coal strength is predominantly driven by China’s severe supply shortfall,” the bank said in a report published this week.

China has pledged to cut production in its 1bn tonne a year steel industry, which accounts for about 15 per cent of its national carbon emissions.

While output rose to a record in the first half of this year it has started to decline as local governments instituted cuts. Data from the National Bureau of Statistics showed China’s crude steel output down 7.6 per cent in July from a month earlier.

Coking coal is not the only commodity where China faces a supply crunch and sharply higher prices.

Thermal coal, which is used to generate electricity in power stations, has also soared with spot prices at Chinese ports rising to Rmb1,076, or $166 a tonne this week, according to Argus Media, a company that tracks commodity prices. This time last year the price was Rmb554.

Although China produced 2.26bn tonnes of all types of coal between January and July — an increase of 4.9 per cent on the same period last year — that was outstripped by thermal power generation, which rose 14.7 per cent to 3,354 terawatt hours, said Jake Horslen, editor of Argus’s Coal Daily International.

With Australia thermal coal imports also banned, China has been sucking in material from other parts of the world, including Russia and South Africa to try and meet demand from its utility companies, which have seen the stockpiles dwindle ahead of winter in the northern hemisphere.

“Unless domestic supply increases the market is going to remain tight,” said Horslen.