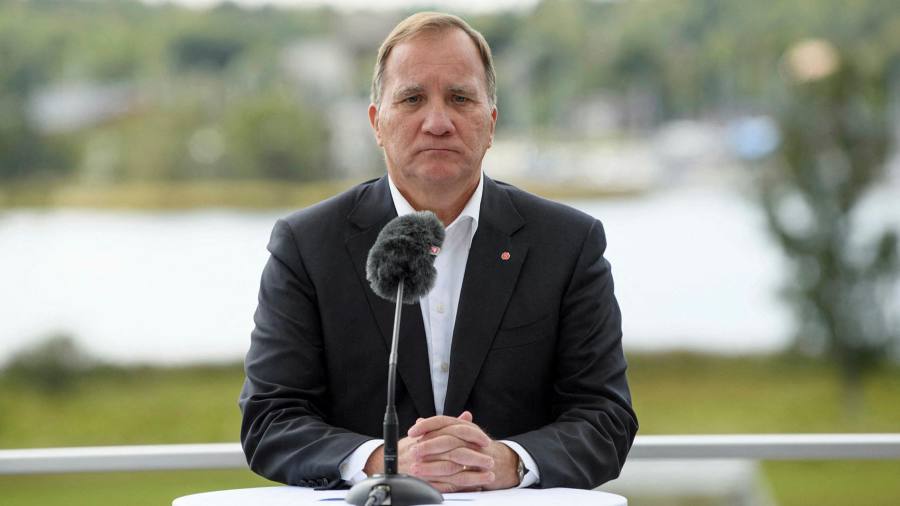 Sign up to myFT Daily Digest to be the first to know about Sweden news.

Sweden’s prime minister has unexpectedly announced that he will step down in three months, plunging the country into fresh political turmoil ahead of elections next year.

Stefan Lofven, who has been in office since 2014, said on Sunday that he would resign as both prime minister and leader of the centre-left Social Democrats at the next party congress in November.

He said he wanted the party to be led by a new leader ahead of elections scheduled for September 2022.

A new prime minister would have to be confirmed by parliament, where the centre-left holds a slender majority in the fragmented and gridlocked assembly.

A former welder and trade union leader, Lofven took over the Social Democrats in 2012 after a dismal showing by the party in the two previous elections.

He led the centre-left group to an election victory two years later, but his legacy is mixed. The Social Democrats, which has dominated Swedish politics for much of the 20th century, retained power in the 2018 elections but won just 28.3 per cent of the vote, its lowest level of support for 110 years.

Lofven has dealt with two big political crises during his seven years in office — the 2015 refugee crisis and the Covid-19 pandemic, during which Sweden’s lack of a formal lockdown has made it stand out internationally. His tenure has also been dogged by a rise in gang violence with almost daily shootings and bombings in the country’s three largest cities, Stockholm, Gothenburg and Malmo.

The left wing has a theoretical majority of one but only by including two parties — Centre and Left parties — who refuse to speak to each other.

Lofven has managed to cling to power by trying to placate his coalition partners, while warning of the dangers of a rightwing government, which would need the support, explicit or implicit, of the anti-immigration Sweden Democrats, who have their roots in the neo-Nazi movement.

He was forced to resign in June after becoming the first prime minister to lose a no-confidence vote when ex-communists of the Left party moved against him. But he returned weeks later owing to a lack of a viable alternative.

The Swedish right has become more united after largely integrating the one-time pariah Sweden Democrats, but they are one seat short of a majority in the assembly.

Lofven’s resignation raises the potential of early elections, if his successor is unable to secure parliamentary support for a new government.

But the scheduled elections in September 2022 would still need to be held, meaning most parties are expected to want to avoid having two votes within a few months.

“Much suggests that it will be a turbulent autumn for Swedish politics . . . During the June government crisis, the financial markets didn’t react much,” analysts at bank Nordea wrote. “Markets will probably not react this time either, although [the] market’s patience is tested every time new political turbulence arise[s].”