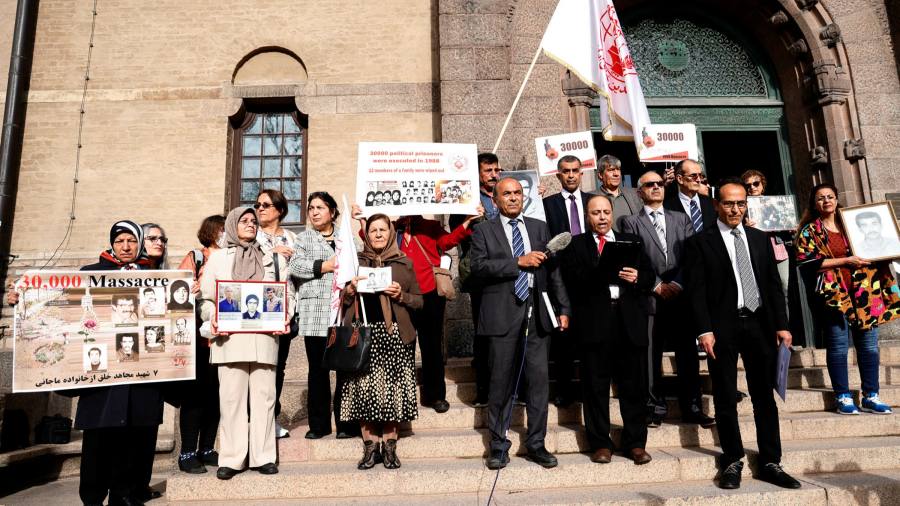 Sign up to myFT Daily Digest to be the first to know about Iran news.

A former Iranian official has appeared in court in Sweden charged with murder and war crimes, in a landmark trial that threatens to increase scrutiny of Iran’s new president and strain ties between Tehran and the west.

Hamid Nouri is accused by Swedish prosecutors of “intentionally killing, with other perpetrators, a large number of prisoners”, as part of the systematic execution of thousands of people by Iran at the conclusion of its war with Iraq in 1988.

The trial, which began on Tuesday in Stockholm and is set to hear evidence over the next nine months, comes just five days after hardline cleric Ebrahim Raisi was sworn in as president of Iran.

Raisi, who was judiciary chief before he won June’s election, is also alleged by rights groups to have been a member of an “execution committee” involved in the mass killing of political prisoners in 1988 when he was a state prosecutor.

Evidence presented in the trial of Nouri, which is set to involve witnesses and testimony from victims, could damage Raisi’s image overseas at a time when his government and western nations are expected to continue efforts to resurrect the 2015 nuclear deal Tehran signed with world powers.

Nouri, who has been held in custody in Sweden since his arrest in Stockholm in November 2019, was an assistant to the deputy prosecutor in the Gohardasht prison outside Tehran, where “a large number of . . . prisoners were executed” between July and September 1988, according to the indictment.

At the time, Raisi was a deputy state prosecutor in Tehran.

Swedish prosecutors allege Nouri participated in the murders and mass executions of prisoners who were deemed either supporters of the Mojahedin-e Khalq (MEK), a militant group then backed by Iraq that had organised attacks on Iran, or leftwing sympathisers.

Nouri is also charged with “subjecting prisoners to severe suffering which is deemed torture”, prosecutors said in a statement ahead of the trial. Nouri has denied involvement.

The trial will reflect on a period during which the Islamic republic faced the gravest threats to its survival as it fought a brutal war with Saddam Hussein’s Iraq. Often described by Iranians and analysts as a cult, the MEK was designated a terrorist organisation by the US until 2012. It is accused by Tehran of assassinating Iranian officials and killing civilians.

Raisi has largely refused to comment on the allegations that he oversaw the execution of political prisoners, but in a 2018 speech he denied he had ever taken part in any such actions either as a private individual or a legal official. He has said the claims against him are politically motivated.

The US sanctioned him in 2019 under former president Donald Trump for being involved in “extrajudicial executions” during that period, as well as his alleged involvement in the regime’s suppression of unrest after disputed elections in 2009.

Despite the concerns raised about Raisi by human rights groups, western diplomats have said they are not expected to derail efforts to revive the 2015 nuclear deal, which Trump unilaterally withdrew the US from three years ago.

The Biden administration has pledged to rejoin the deal if Iran falls back into compliance with the agreement. The remaining signatories — the UK, France, Germany, China and Russia — have held a series of talks with Iranian officials in a bid to thrash out an agreement that leads to US sanctions being lifted and Tehran reducing its nuclear activity.