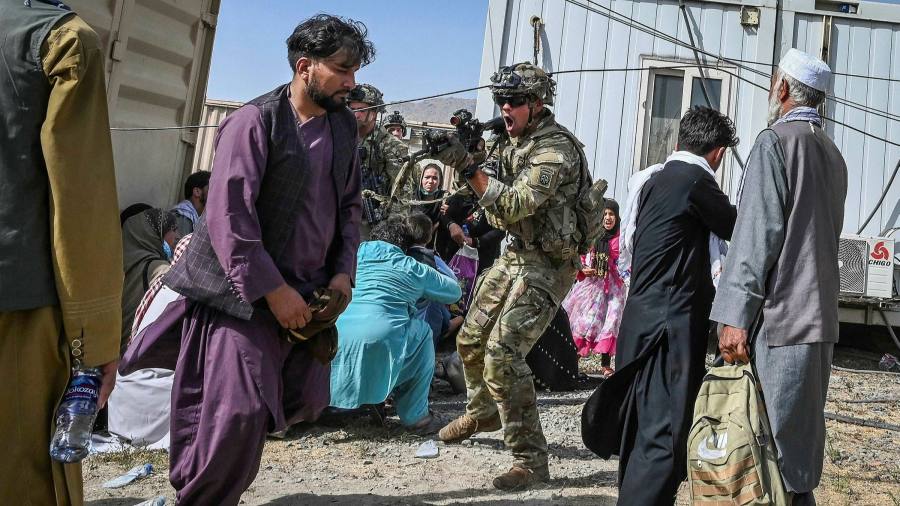 “There’s going to be no circumstance where you see people being lifted off the roof of an embassy of the United States from Afghanistan,” Joe Biden told a press conference little more than five weeks ago. It was “highly unlikely,” the US president said, that the Taliban would own the whole country.

On Sunday helicopters plucked people from the roof of the US embassy in Kabul and the Taliban posed for photos in the presidential palace after a lightning offensive across Afghanistan.

The sorely incorrect assessment from the US commander-in-chief has exposed failings in the US intelligence, policy and decision-making apparatus that officials who work on the region say will have far-reaching implications.

The Biden administration has thus far admitted to making a wrong-headed judgment in one area alone: its analysis of Afghan military weaknesses.

“The Afghan Security Forces . . . proved incapable of defending the country. And that did happen more rapidly than we anticipated,” Antony Blinken, US secretary of state, told ABC on Sunday, when asked if the president was misled by his own intelligence agencies.

A senior intelligence official defended the intelligence community following the fall of Kabul on Sunday night, telling the Financial Times: “Strategically a rapid Taliban takeover was always a possibility”. The person added that the question all along was whether the Afghan government and military had the cohesion and willpower to fight back.

“As the Taliban advanced they ultimately met with little resistance and we’ve always been clear-eyed that this was possible and tactical conditions on the ground can often evolve quickly.”

A US defence official told the FT the Afghan government was slow to recognise the nature and significance of the threat. “We were trying to coach them into a plan,” the official said, adding that the government had failed to consolidate forces in the right places. Joe Biden in a video meeting with Kamala Harris, their security team about the situation in Afghanistan © Twitter@WhiteHouse/Handout/Reuters

At first, Afghan special operations forces, trained by the US and other western militaries, successfully repelled the Taliban onslaught in three key provincial capitals, the official said. But the turning point came when the Islamist group seized their first capital in Nimruz province on August 6. Kabul had no special forces left to send there, and the regular forces were demoralised and did not fight.

“We were certainly expecting the ANDSF to be able to fight better and for longer,” said the US defence official of the Afghan national defence and security forces.

US intelligence and military leaders had already repeatedly warned Biden, both publicly and in private, that the Taliban could take over the country. At the same time, Biden was pursuing Trump-era talks with the Taliban to try to secure a peace-sharing deal in Kabul.

Yet a report this year from the US intelligence community stressed the Taliban was confident it could achieve a military victory and that the prospect for any peace deal was low.

“The Taliban is likely to make gains on the battlefield, and the Afghan government will struggle to hold the Taliban at bay if the coalition withdraws support,” it said.

Five days after the report was made public, Biden in April announced he was pulling US forces out of Afghanistan, starting on May 1.

More warnings followed. Later in April, General Frank McKenzie, top US general for the region, said he had “grave doubts about the Taliban’s reliability” as the Biden administration pursued its diplomatic track with the insurgents.

In June, Scott Miller, the departing US commander in Afghanistan, gave a bleak assessment of countrywide Taliban gains in the wake of US drawdown and publicly warned of the risk of civil war. Biden himself admitted last month the Islamists at the start of the year had been at their strongest militarily since 2001. CIA director Bill Burns told public radio NPR the trend lines were “certainly troubling” when asked about intelligence reports that Kabul could fall within six months of US withdrawal.

“Everyone saw this coming except the president, who publicly and confidently dismissed these threats just a few weeks ago,” said Mitch McConnell, the top Senate Republican. The Taliban also timed a campaign of terror to coincide with the official US timetable for a rapid withdrawal. Targeted assassinations and a surge in violence, including reports of massacres, accompanied a countrywide rural campaign that isolated provincial capitals from each other.

As the Taliban rampage continued, some officials acknowledged US military and intelligence assessments had failed to keep pace with the situation on the ground. One person with inside knowledge of the discussions said even though intelligence assessments were regularly updated to address the threat to Kabul once provincial capitals started to fall, officials remained insufficiently pessimistic and bound by groupthink.

Military officials had also assumed the Taliban would fight in a linear fashion from town to town, and did not expect them to move on the capital before they had fully secured the rest of the country. A former senior US intelligence official suggested Washington should have known the Afghan forces would fold easily, saying it was impossible for them to fight once they lost US air support in such a rapid drawdown by Washington, and that the swift Taliban victory was “foreseeable”.

“Once soldiers realise that no one is coming to help with reinforcements and close air support, they predictably withdraw, desert, or surrender,” said the former senior official. “The entire withdrawal has been too hasty, overly optimistic . . . and bungled in numerous respects.”

Peter Ricketts, the UK’s former national security adviser, said there had been a “massive western intelligence failure” on the Taliban’s ability to take on Afghan forces.

“The fact that [Donald] Trump negotiated directly with the Taliban and cut the Afghan government out at [talks in] Doha, was a major morale hit to the Afghan government,” he said. “And then suddenly Biden announcing that the US would be leaving come what may by September 11, I think, knocked the stuffing out of the Afghan armed forces. Because if you think your government is likely to collapse in the next few weeks, you’re not going to go out and die for it.”

Some detractors have said the real blame rests not with the Afghan forces or the misjudged US estimation of them, but with the US president. Biden, they argued, wilfully ignored intelligence assessments and prioritised a political policy decision that played well with US voters.

“Instead of choosing the responsible approach, he chose to rely on political polls, not data from his military leaders and the intelligence community about the conditions on the ground,” said Jim Inhofe, top Republican on the Senate Armed Services Committee. “President Biden owns this mess — the blood is on his hands,” he said.

Are you in Afghanistan or related to people who are in the country? What have been your experiences and those of loved ones? Please share your comments in the box below.