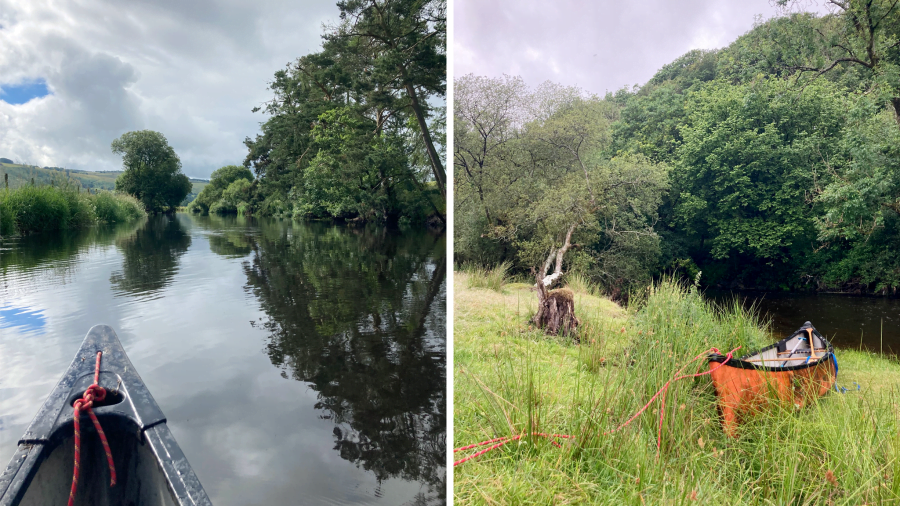 We launched at Tregaron, in the soaking green heart of Wales, pushing the Canadian canoe into the river Teifi from a field owned by Sue Kemp. The proprietor of the Riverbank Café, Sue charged us nothing for driving across her field, unloading the canoe and gear, leaving the car and setting off down river. I bought a picture of a raven from her. It made a striking parking ticket.

In the several days and three rivers to come, that raven was the only kind of permit we purchased. My crew mate, the writer and broadcaster Laura Barton, had noted heavy rain and summer storms were forecast, but the question of our rights to canoe on the Teifi, Usk and Thames she did not raise. Had she, I would have said, “It’s complicated, but we’ll be fine.”

We were away, absent from life, off down the river, slaloming the meanders into bright secrecy

The man dressed like the fishing equivalent of the SAS, with whom I had an altercation on the Usk, would have disagreed. But that was to come. Now we prepared for our missions. Russle’s seaworthiness was a worry. Named after Russell, a Zimbabwean who taught me to canoe on the Zambezi when I was a teenager, Russle is 21 years old, and spent the last 15 in a patch of my mother’s nettles in Wales. It had grown a coat of moss and become home to many bugs. Would the hull stand an expedition?

“Hit it with a hammer,” advised Andy Butler of Go Kayaking, a specialist retailer in Runcorn, “Then hit it with a rock, then jump on it. If you break through you need a new boat.”

I did this. We did not need a new boat. Coffee, Laura said, she must have. We laid in camping gas and mess tins, coffee, rum, rice and waterproof bags and matches and tuna and peas. “What about a map?” I asked.

One of her many professions is travel writing. Around now, were it not for the pandemic, she would be writing in America, and I in Africa. Laura loves the southern states, the Midwest and post-industrial cities. “I tend to aim for the dodgiest place, take a seat at the bar and wait for the stories to come to me,” she said.

“I tend to stick it out in the back of a Land Cruiser,” I muttered. “And look forward to the luxury safari camp in the evening.”

Two travel writers who cannot travel, we thought: a canoe, tents, a recorder — we could make a podcast for readers and lovers of travel. Our only constraint was football.

“We must be in front of TV on Wednesday at eight for the semi-final,” Laura announced. I promised we would be. I did a safety briefing.

“If we go over save yourself. When we hit branches get down fast, head between knees, lower than the profile of the boat. Don’t get between the boat and the shore.”

“Right. Got it.” We zipped up our life jackets and launched. “She floats!” Laura cried. “Go Russle! We’re off!”

An otter eating a fish put her head out of the water and regarded us. She did not pause in her chewing

We really were. The Teifi was in fat green spate, boiling along at a metre a second. Paddling against it would be hopeless. We would need to make our moves early and go with whatever happened. Within moments, around the first bend, it started happening. Three larch trees had fallen across the river. You steer a canoe from the stern. Your crew mate in the bow provides paddle power and strikes any obstacle first.

I aimed for the lowest point of the larches’ barricade. We hit it and stuck. Russle, with her freight of tent and gear, was low in the water and heavy. A Canadian canoe of Russle’s size can take three adults, or two and children. I was glad we had no kids with us now. Laura was full of vim. “I could climb on to the trunks?”

We used a comic and undignified technique we dubbed “bunny-hopping”, jerking, diving and thrusting to scrape and lunge our craft free. Moving fast again, we now swooped towards a double strand of barbed wire, one at water level, one a foot higher. “Duck!”

Laura jackknifed at the waist, I threw myself facedown on the bags and Russle shot sublimely between the strands. We were exultant. We were away, absent from life, off down the river, slaloming the meanders into bright secrecy.

Rivers and becks are naturally concealing. Thousands of miles of natural waterways in Britain are largely unobserved by people. We cross their bridges, stroll short sections, fish certain reaches and boat on their estuaries. The lowest furrow in any landscape, rivers are hidden, sinuous ways through the country. A Royal Marine once explained to me that the safest line of approach to the enemy is generally up a watercourse.

The historically covert character of the lost lands of mid Wales, where the Ordovices and Silures resisted the Romans, and Owain Glyndŵr the English, added to our feelings of discovery and adventure. On the way in, crossing the firing ranges of Epynt, we saw two Gurkhas in camouflage cream driving a civilian vehicle, grinning. On the hills above us, I learnt later, six sheep were being eaten by the special forces, who would compensate their farmer with a generous cheque.

But the killers we saw were all residents. So many herons that we stopped pointing them out; cormorants, from the Teifi’s mouth at Cardigan; kingfishers; young mergansers — saw-billed ducks that move in splashing packs when young — dippers, buzzards, kites and ravens were all around us. The beauty was African in its abundance and confidence. The canoe barely bothered the birds: we did not need binoculars to study the hues of the young redstart’s tail, or the buff plumage of sand martins.

We got good at picking a line through the rocks and overhanging branches, at following the arrowhead of smooth water that pointed through the turbulent sections, at pushing on with feet and paddles when we grounded. Young mink squeaked indignantly. An otter eating a fish put her head out of the water and regarded us. She did not pause in her chewing.

Russle was indomitable. Laura was fearless. We skied around tight rushing bends, bashed through branches and ducked under wires. We sipped a new drink Sentia, invented by Sir David Nutt, psychopharmacologist. Sentia promises an alcohol-like effect but contains no alcohol. Dashing it with rum rather flawed our road test but we felt excellent.

Our profession attracts those with a taste for action. Laura told a terrifying tale of being madly driven along the levees of the American south at night by a strange man on the way to an impromptu music festival. “I thought, if I can just make it back alive, I’ve got a great story,” she said. The last time I was in a canoe like this, on the Kafue in Zambia, it was bitten in half by a hippo.

There were plenty of moments when we thought we might go over, especially when thick trees on both banks met in clotted tangles in midstream, the rain hammered down, the water swept on and we could not see where we were going. We rammed into logjams, bundled over a weir, but death seemed unlikely. Laura Barton and Horatio Clare canoeing on the Teifi

We fly-camped in a delightful field somewhere on the way to Lampeter. We were discovered by a laughing man named Martin and his four giggling children. “My aged parents thought you might be ravers! No, you’re fine, keep your money. You’re very welcome.”

The next morning, hove to by a lovely bank, the air full of birds, Laura talked about being a woman writer commissioned to interview rock stars. “Van Morrison was a pale white knuckle of a man,” she said. He answered her questions “with a hulking and impenetrable flatness”. Although his music has meant more to her than anyone’s, she walked out on him after 16 minutes and 28 seconds. Her eyes flashed as she recalled it. There is something about talking in a canoe which makes for natural sincerity. Being in the same boat brings comradeship. Being borderline hypothermic, as we were by the time we made Lampeter in shivering downpours, brings solidarity.

Feeling strong, shrived and freezing, we made it to a TV in a pub in Newcastle Emlyn in time for kick-off against Denmark, and England’s last victory in the European Championship.

Laura left the next day for a music industry party. I took Russle down my local river, the Usk, launching near the Nantyffyn Cider Mill, just west of Crickhowell, and paddling down to Abergavenny. The Usk could have been made for canoeing, a lazy green ribbon of easy bends, lovely reaches and friendly fishermen. “Scare them towards me!” one cried, “They’re not biting!”

Alas, the man with the camouflage vest and ammo pouches, possibly a gamekeeper, whose opening shout was “Fuck off, you’re trespassing!”, was not at one with the gentle riverine vibe. We debated.

“The Usk is not navigable!” he shouted.

“I would dispute that,” I objected. “I am navigating it.”

“You’re breaking the law,” he said, and took my picture.

In fact the law is unclear. Landowners own the banks and the bed of the river, right to the deepest point. But they do not own the water. Trespassers can be prosecuted for damages — but a floating canoe does not damage anything. The Magna Carta gave common people the right to navigate all Britain’s waterways. The Wye and Usk Foundation, a lobbying charity which looks after these rivers, grants paddling on various stretches when the water is above a certain height, but downstream of Crickhowell, where I was, is not among them. Drying out from the Teifi in Newcastle Emlyn, before transferring to the Usk  © Laura Barton

I cruised away, feeling guilty. It took a while for tranquillity to return. Two young hobbies, elegant and agile falcons, cheered me up. It is sad that accessing so much easy joy can cause conflict. Nothing I have done since suffering a breakdown two years ago has felt so mentally and physically vivifying as paddling, swimming and camping on these canoe trips. I would wish the balm of the waters on anyone.

Certainly, fishermen with expensive permits deserve peace and solitude. But with only three per cent of rivers available for uncontested navigation (according to Nick Hayes’ The Book of Trespass) while hundreds of deserted miles are barely fished, is the balance not worth examining?

Having hauled out at the Bridge Inn, Abergavenny, I loaded Russle on to the roof rack and made for London, where Laura and I launched into the Thames at Kew. A rising tide carried us to Richmond. The ebb bore us back to Strand on the Green in Chiswick. As the day dimmed and the river glowed, travel, real travel, never seemed more easy or more serene.

The Wye and Usk Foundation (wyeuskfoundation.org) has details on access and navigation on the Usk; British Canoeing (britishcanoeing.org.uk), the sport’s governing body in the UK, has information on the legal issues surrounding access.