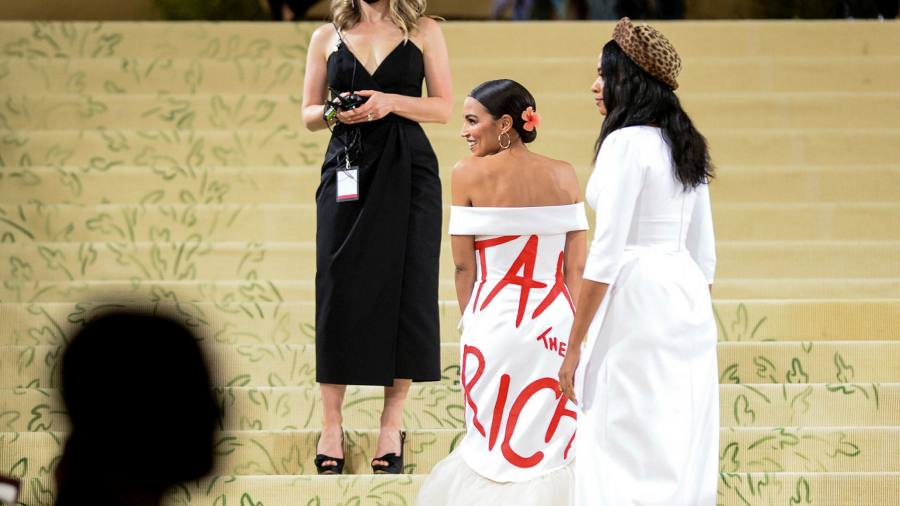 Sign up to myFT Daily Digest to be the first to know about US tax news.

It is better, they say, to have half a loaf than none at all. That is the case for this week’s tax proposals from congressional Democrats, which have watered down Joe Biden’s campaign plan. But the metaphor underplays the good fortune of America’s billionaires, who, at worst, would have to yield a few crumbs. For a moment it looked like the Democratic party would confront US inequality head-on. It has already passed. Barring a dramatic shift in partisan arithmetic, the super-rich seem to have bought themselves several more years’ reprieve.

It cannot all be put down to Democratic “moderates”, such as West Virginia’s Joe Manchin, whose 50th Senate vote gives him great leverage over the contents of Biden’s $3.5tn bill. Manchin will surely shrink its size. He will also ensure that Biden’s proposal to lift the US corporate tax rate from 21 per cent to 28 per cent falls far short. Nor were Biden’s plans to almost double the US capital gains tax to the top 39.5 per cent bracket likely to get past the party’s centrists. These are the realities of having a wafer-thin majority. The limits to a president’s power are never so exposed as when he wants money from Congress.

But the loudest trumpet in this retreat belongs to mainstream party liberals from Democratic strongholds such as New York and California. They are hoping to repeal the $10,000 annual cap on the state and local tax deduction (Salt), which enables residents of high tax states to offset what they pay locally against their federal income taxes. Almost all the beneficiaries of scrapping the cap would be rich. The cost to the taxpayer would amount to $91bn a year, which would more than wipe out the income tax increases the wealthy would have to pay under the Democratic plan. The wealthiest 0.1 per cent would get an average $145,000 tax cut. For the middle 60 per cent of households, it would be $27 a year.

This is not just bad economics — it is hard to find a single economist on the left or right who thinks it would be a good idea. It is also terrible politics. In 2017 Democrats found a popular echo in attacking the inequities of Donald Trump’s $1.5tn tax cut. But the repeal of the Salt tax cap would be far more regressive than Trump’s tax cut. Passing it would give Republicans an easy opportunity to paint Democrats as hypocrites who claim to be pro-poor while serving their rich donor base. Worse, such a critique would not be that far wrong. How often are Republican attack lines based on facts nowadays?

It does not help that Democrats are presenting their Salt plans as “relief for the middle classes” — and now “pandemic relief”. It was Republicans who substituted “tax relief” for “tax cut” to make it sound better. Democrats are picking it up verbatim. “When Democrats say this is relief for the middle classes, what exactly is their definition of ‘middle’?” asks Richard Reeves, a Brookings fellow and scholar of US meritocracy. “Do words have no meaning any more?” It was Trump who put the $10,000 cap on Salt, doubtless for partisan reasons — to punish rich liberals in Democratic states. He was already shifting his domicile to Florida. Many rich New Yorkers followed suit in the pandemic. Scrapping that cap would not make Democrats anti-Trump. It would just make them pro-rich.

The bill as a whole would still deliver a big improvement to America’s safety net. The pandemic child tax credit would become permanent. Early childhood learning would be universal, bringing the US into line with the rest of the developed world. And if Manchin does not purge its green elements, the bill would mark a big step towards Biden’s goals of reducing America’s net carbon emissions.

But it is also important to stress what it would not do. By raising the tax on capital gains only slightly and opting not to tax asset appreciation on inheritance, it would leave America’s plutocratic reality in place. The ratio of billionaires’ wealth has risen by a third to 19 per cent of gross domestic product since the start of the pandemic. Now is the ripest opportunity in a long time to redress America’s late Rome-style inequality. The fact that Democrats are so timid speaks volumes.