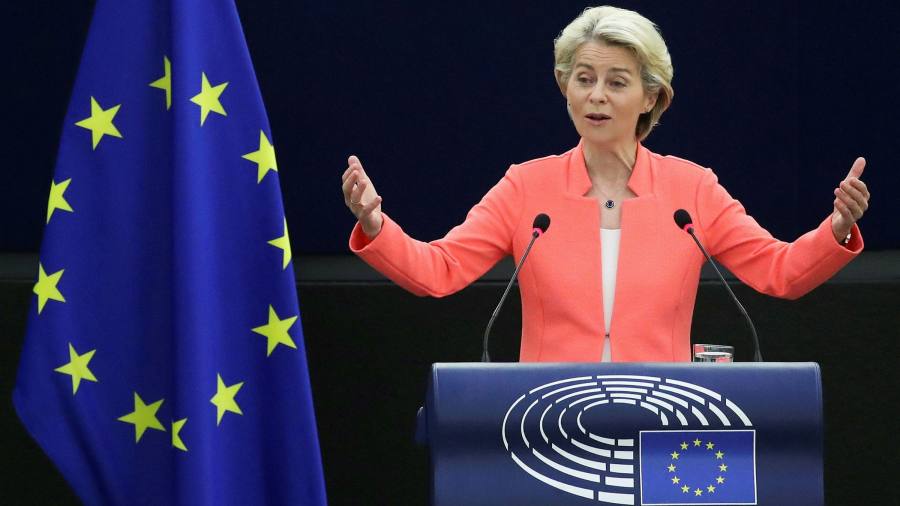 Sign up to myFT Daily Digest to be the first to know about European Union news.

This article is an on-site version of Martin Sandbu’s Free Lunch newsletter. Sign up here to get the newsletter sent straight to your inbox every Thursday

I just made a brief visit to Brussels for the first time since the pandemic to catch up with old and new contacts. Fortunately, not all of them had decamped to Strasbourg to witness the start of the EU’s political year: the European Commission president’s traditional State of the Union speech.

My FT colleagues’ coverage of Ursula von der Leyen’s speech picks out the promise of a “Global Gateway”, a new infrastructure programme with the ambition to rival China’s Belt and Road Initiative. That is an excellent idea. But I think it will only work if the EU puts as much money behind it as China has been willing to put behind Belt and Road, and if the EU also finds ways to share its institutional “software” — regulatory convergence with the bloc with a view to closer economic integration. And it needs a much better name. Why not the Marco Polo or Magellan project?

The speech was generally punchy on China — a ban on imports made with forced labour was promised — and on European values. Otherwise, the speech largely developed the themes already central to the von der Leyen commission: proposals for decarbonisation; an industrial policy aiming at self-sufficiency in strategic goods, including a European Chips Act; and a more capable health policy at the EU level (with the biggest spending commitment of all the proposals, von der Leyen having promised €50bn).

There is a strong argument to be made, however, that this commission should care less about proposing new initiatives than bringing to fruition those it has already launched. After just two years in office, even without the work brought on by the pandemic, the commission’s desks would be groaning under the weight of big policies, ranging from an enormous decarbonisation strategy to plans for reshaping the digital economy.

Even if the commission only (“only”) implemented and executed what is already on the table and proposed no new initiatives in the three years left of its mandate, it would have changed the EU more than most commissions do.

That would require a focus not just on policies but on institutional modernisation of the commission itself, argues a report by the European Policy Centre’s Georg Riekeles. (I find particularly intriguing the idea of using as a model the ways in which the Brexit Task Force, where Riekeles worked, was able to keep national capitals and the European parliament on board throughout the Brexit negotiations.) By this yardstick, the State of the Union did not deliver what was needed.

In the short term, however, a lot of this is crowded out by more immediate political dynamics. Here are the three factors that dominated most of my conversations.

First, everyone is waiting for Germany and France. The outcome of the German election determines what is politically feasible — and not just the results on election night but what sort of governing coalition can be negotiated, which could take months. (A perfect illustration is my Berlin colleagues’ interview with the Free Democrats’ Christian Lindner.)

It also matters greatly what France chooses to prioritise as it holds the presidency of the council of the EU in the first half of next year — much of which will coincide with French president Emmanuel Macron’s re-election campaign. It is still unclear what Paris will find advantageous to push for (though there was a hint in von der Leyen’s namechecking of Macron, with whom she said she would organise a European defence summit). The EU machine will, in other words, be squeezed between two elections for the next nine months, one engendering paralysis, the other dynamism but not necessarily of the right kind.

Second, the debate over the EU’s fiscal rules is heating up again. A consultation on how to reform them had just started when it was sidelined by the pandemic, which in any case led the rules to be suspended until 2023. This now looks set to restart. The different sides have been laying down markers. Last week, several northern, Baltic and east European countries signed a paper insisting there is no need to agree reforms before the rules are supposed to come back into force. That is to say, they will not be bounced into accepting weaker rules because of a deadline.

In her speech, von der Leyen promised a consultation that would aim for a consensus “well in time for 2023”. It is hard to see this as realistic, or indeed that she thinks it is realistic. It may just as well be an attempt to push back against the aforementioned paper and restore a sense of a deadline for reforms. Rather than being naive, I find the commission more likely to be seeking ways to increasingly force the issue, albeit delicately.

This brings us to the third short-term political dynamic, related to the recovery and resilience plans funded by the EU’s unprecedented common borrowing. In most cases they are proceeding remarkably well: national capitals are seen as submitting serious, solid plans, and the commission as having done a good job ensuring their quality. If this continues — within months, countries have to reach defined milestones to receive the next tranche of money — the tantalising question is whether either the mechanics of the recovery spending or the trust it has generated can help improve the rest of EU budgeting, and even improve the prospect of an agreement on fiscal rules reform.

But another aspect of the recovery programme is much more difficult: the commission still has not approved the plans of Poland and Hungary, and even if it did, national ministers would most likely not accept them with the required majority. The mood has hardened markedly against those countries’ challenges to the EU’s laws and values, and it is now hard to see how this conflict ends. But when it does, it will leave the commission with a beefed-up armoury for taking on rule of law breaches in the member states. It is showing its willingness to withhold money. The two countries’ plans themselves will include institutional reforms to strengthen the rule of law — so even after they are approved, money will be conditional on improvement. And Europe’s top court is likely soon to approve new rules making it easier to stop transfers of EU funds when there are rule of law-related breaches.

A resurgent pandemic, or some other unexpected crisis, could sweep all this to the side. But at the moment, it looks like it could be a momentous year for EU economic governance.

The European Central Bank has secured a taper without a tantrum.

The Peterson Institute’s Sean Hagan analyses President Joe Biden’s anti-corruption initiative, and welcomes its treatment of corruption as a threat to US national security interests.

The US Treasury has issued a report on the economics of childcare supply. In a speech, Treasury secretary Janet Yellen said childcare “is a textbook example of a broken market” and that policy must reflect that its “contribution to economic growth is as essential as infrastructure or energy”.

The Lex Newsletter — Catch up with a letter from Lex’s centres around the world each Wednesday, and a review of the week’s best commentary every Friday. Sign up here