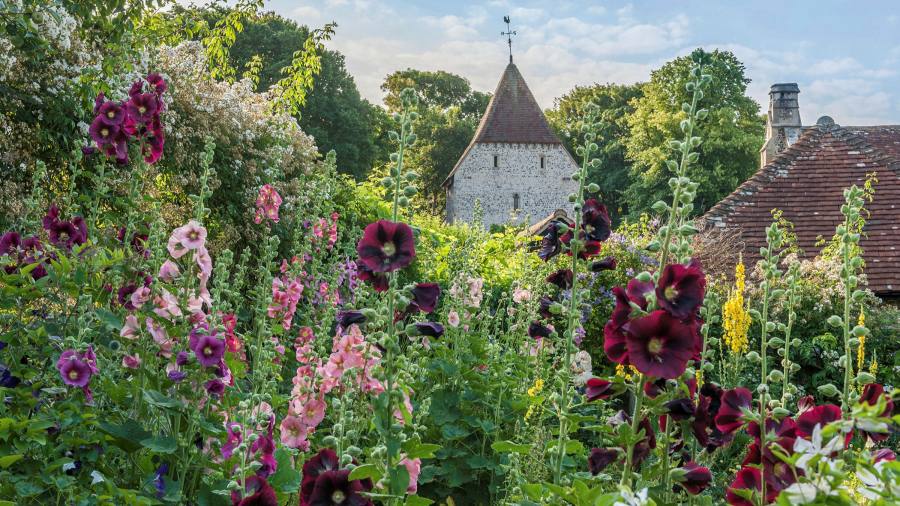 Hollyhocks have been having a great year, at least whenever I grow or see them. They have turned supposed wisdom on its head. I love their great spires of colour in late July. They fill gaps, add height and come with associations in art, poetry and history that enhance what gardeners can see in them. Ever more forms and species are coming on sale. The race for the ideal garden hollyhock is not over.

In Britain, hollyhocks were first mentioned in the 1440s in a text called The Feate of Gardening but they had arrived far earlier. They are not native flowers. In France they are still known as roses trémières, derived from outremer, or rose flowers from overseas. Legends link them to returning Crusaders, even to Eleanor, wife of our Edward I, a visitor to the Holy Land.

Their English name has nothing to do with prickly holly or horses’ lower legs. It derives from “holy” and “hock”, a Middle English word that meant mallow. The holiness might relate to an origin in the Holy Land, but it might reflect the plant’s supposed medicinal powers. The main use of hollyhocks’ leaves and flowers is now culinary. They are surprisingly tasty in salads.

The best-known hollyhocks grow about 6ft high, but fit well into small gardens. They put down a long main taproot and can anchor themselves in gravel or below walls. Although they like to make side-roots, they will
grow in narrow beds too. Some of the best in my comfort zone are rooted between the front wall of a local pub and its adjoining pavement. They have disregarded social distancing and are flaunting their flowers openly, unmasked.

Height adds to gardens in laterally confined spaces. Hollyhocks have been adding beauty for more than a century, especially in that sentimental item, the cottage garden. In the 19th century, artists painted them beside the doors of thatched cottages, places in which a bonneted “goodwife” was assumed to live. Perhaps she grew them because they were medicinal, but I suspect she found they appeared anyway. Once someone else has planted them, they seed themselves freely.

I may be in a minority, but this year, my hollyhocks are relatively free of rust, the disease that bedevils many of them. It spreads by airborne spores and causes a hollyhock’s leaves to develop yellow spots and then to go brown before the entire plant dies. Experts now say that rust fast-breeds on hollyhocks in wet summers, but this year’s cool wet June and early July have not rusted mine.

I remember Christopher Lloyd telling me that he could never grow hollyhocks on his heavy soil at Great Dixter, whereas I had no problems on dry soil. Nothing, I think, has changed, except so-called wisdom.

Rust is still a menace and none of the anti-chemical brigade has an answer to it. Picking off infected leaves does not stop it. The two best antidotes on the market are Copper Mixture, from Vitax, and Provanto Fungus Fighter Plus. The former should be applied before rust develops in midsummer. The latter should be sprayed on to leaves that start to show spots.

Spraying has to be repeated at intervals, but is worthwhile. Last year, in a bad year for rust, I had none. I had healthy bees and cabbage white butterflies on the hollyhocks’ flowers.

When I see happy hollyhocks, I conjure up non-chemical images in my mind. Some are from paintings by great artists, but others are from life and death in the prehistoric past. In the 1950s, archaeologists found pollen of hollyhocks in the Shanidar Cave in Iraq. It was mixed in with the bones of Neanderthals, our early human relatives. Its presence was interpreted as evidence of a funerary rite in which Neanderthals placed flowers of the hollyhock among their dead.

“Hollyhock man” became a popular nickname for one of our remote ancestors and in the 1960s Neanderthals were repackaged as history’s first flower people. They were not just waiting to play in the back line of a dour English football team from the old First Division. They were able to plan and care for others when the final whistle blew.

I doubted this ritual theory. In the cave the pollen came from a local species of Alcea, which was neither tall nor double flowered. It could have blown into the cave by accident and joined the dead there without a Neanderthal’s planning. By the late 1990s, hollyhock man was being regarded with scholarly scepticism.

In 2016, however, a British team that had gone back to investigate the cave at Shanidar found a cluster of Neanderthal bones adjacent to earlier finds and pollen impressed in their company. The full analysis has yet to be published, but the leaders of this research, formerly sceptical, are pretty confident that the pollen’s presence was indeed an organised intervention.

Speakers on the House & Home stage will include FT columnists Luke Edward Hall and Robin Lane Fox, among others. To book tickets, visit herehere

In late July, I become a hollyhock man, picking the flowers, albeit for ornament, not for the dead. My best hollyhock is not a double-flowered variety, but a light and airy species that used to be named after a resemblance to the leaves of cannabis. It is now called Althea armeniaca, reflecting its homeland, not its green-fingered leaves.

I strongly recommend it. The stems can reach at least 6ft but remain light and airy, carrying small pink flowers that seldom need a support. It loves my dry ground, never catches rust and gives August an unusual floral elegance. Neanderthals in the Cotswolds would jut their jaws and approve.

The best known hollyhocks are those bred from a pink one, Althea rosea. In the early 1880s, William Chater made his strain of double-flowered hollyhocks famous. Various Chater forms can still be bought, and Thompson and Morgan are offering 15 garden-ready Chater hollyhocks for £12.99 plus delivery, available in the UK only, a good buy for flowering next year (thompson-morgan.com). Plant them in sun, not shade, and wait.

Chater’s were not the first doubles. In the 1880s, hollyhocks featured memorably in Impressionist paintings by Berthe Morisot, the best of whose hollyhocks are in Paris’s Marmottan Monet museum. Double-flowered ones had an even older artistic pedigree. They appear in fine Rococo paintings by Jean-Honoré Fragonard, planned for the walls of an entire drawing room.

In 1771, Fragonard began work for fastidious Madame du Barry, mistress of Louis XV, on four paintings, to be called “The Progress of Love”. She sent them back. The French revolution intervened, but from the 1790s onwards, Fragonard resumed this unrevolutionary series, adding 10 more paintings until the story of dating ran from two lovers’ first meeting, enhanced by a rose, through their tryst in an enclosed garden to the woman dreaming at noon, perhaps in vain, perhaps not.

Fragonard planned the series for his cousin’s villa in Grasse, where the long thin hollyhock panels were to go in the drawing room’s narrow spaces. Remarkably, these superb paintings remained unseen by outsiders until 1858. They then caused a public sensation. In 1898 they were put up for sale and bought by John Pierpont Morgan, hollyhocks and all. On Morgan’s death, Henry Clay Frick bought them and gave them a new room, which they continue to occupy in New York’s Frick Museum.

The hollyhocks in the panels are double-flowered. From Neanderthals to robber barons, these flowers have such a span. Extend it by growing them in your own sunny yard.