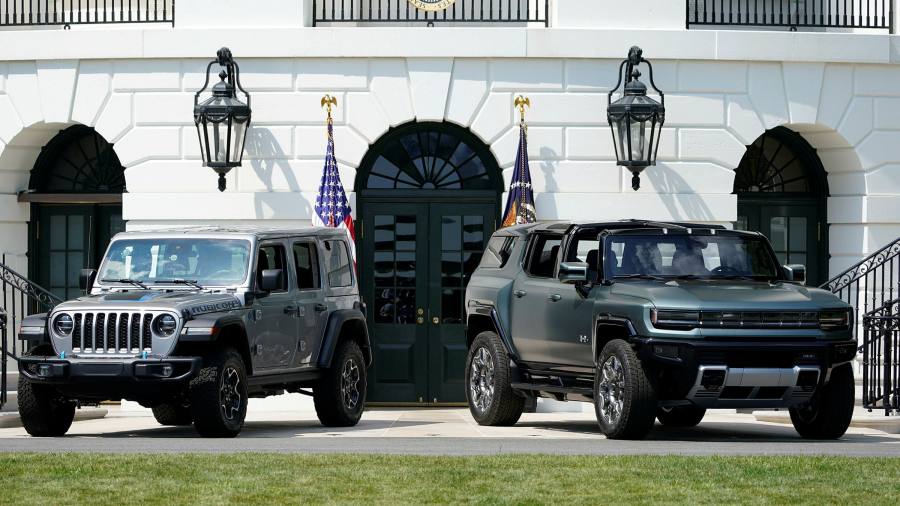 Sign up to myFT Daily Digest to be the first to know about Electric vehicles news.

Ashley Nunes is the Director of Competition Policy at the R Street Institute and a Research Fellow at Harvard Law School. In this post, he argues that the rush to adopt electric vehicles’ may end up widening existing inequities in American society.

The race to go green is heating up. A week ago, President Joe Biden signed an executive order calling for half of new auto sales in the US to be electric by 2030. The move — which has the blessing of auto execs and union leaders — is a crucial test of the President’s climate agenda, one that proved popular with voters last November.

When it comes to the auto industry, the need for climate action is pressing. Fossil fuel powered vehicles are a significant cause of global warming, emitting roughly 24 pounds of carbon dioxide and other global-warming gases for every gallon of gas burned. Electric cars do make a difference. Over its life cycle — from digging up the raw materials to eventually laying the car to rest — an EV will emit fewer greenhouse gases than its gasoline powered counterpart.

This comparison explains ‘car guy’ Biden’s enthusiasm for all things electric. At a Ford assembly plant last May, the President said, “we’re going to set a new pace for electric vehicles.” Similar sentiments were echoed by his press secretary who declared, “the future of the [auto] industry is electric. Everyone will tell you that.” Maybe, but here’s something they won’t tell you: going all-in on EVs trades one type of inequity in for another.

Auto ownership isn’t cheap. Insurance, maintenance and fuel costs make up a household’s second-largest expense, after lodging according to a working paper from the International Council on Clean Transportation. This burden is particularly significant for low-income families. Switching to EVs should help in the long run because these vehicles are cheaper to operate, and the federal government has — through generous handouts — sought to further decrease EV ownership costs.

But when it comes to going green, cost isn’t the only concern. Ease of use matters, too. While gas guzzlers can be topped up by the estimated 150,000 gas stations across the US, EVs need charging stations. Good luck finding those. And, when you do, be prepared to deal with broken chargers, confusing payment systems and less-than-appealing electricity rates.

Existing EV owners, most of whom are upper-income, don’t seem to mind this extra effort. Why should they. Having cash on hand means being able to splurge on, among other things, a personal garage, which is where most EVs are topped off. If you’re rich enough, you can just set it and forget it. Even if you can’t charge, its likely you also have a second car as backup.

The proposed solution is a nationwide network of chargers. The US Senate recently clinched bipartisan infrastructure deal that provides $7.5 billion for charging infrastructure along major highways and corridors, the goal being to make charging stations as ubiquitous as gas stations. A related effort aims to promote “equitable” EV recharging through accelerated public investment. But what’s equitable about the rich person charging their car at home while the poor person stands in the rain?

And how long should America’s poor spend at public charging stations? While topping off a gas tank takes a few minutes, fully charging an EV can take hours. Fast chargers are often offered as a fix. But even those take longer than gasoline refills. That’s time America’s poor simply don’t have. Low-income parents already endure longer than average commutes, something which hinders their children’s ability to enter better schools, participate in extracurricular activities and achieve maximum lifetime earning potential. Expect this to worsen should this demographic be asked to idle on the side of the freeway in the name of green energy.

Going electric admittedly has perks. EVs are definitively greener, cleaner and better for the environment than gas guzzlers. Using EVs also benefits poor communities who disproportionally suffer climate change related effects. But switching from pumps to plugs — for the poorest Americans at least — perpetuates inequities of its own.

After signing the executive order at the White House, President Biden jumped into a waiting EV and went for a spin. He asked Americans to follow suit, calling EV adoption an act “to save the planet.” That it may be, but lets not pretend it will leave everyone better off.