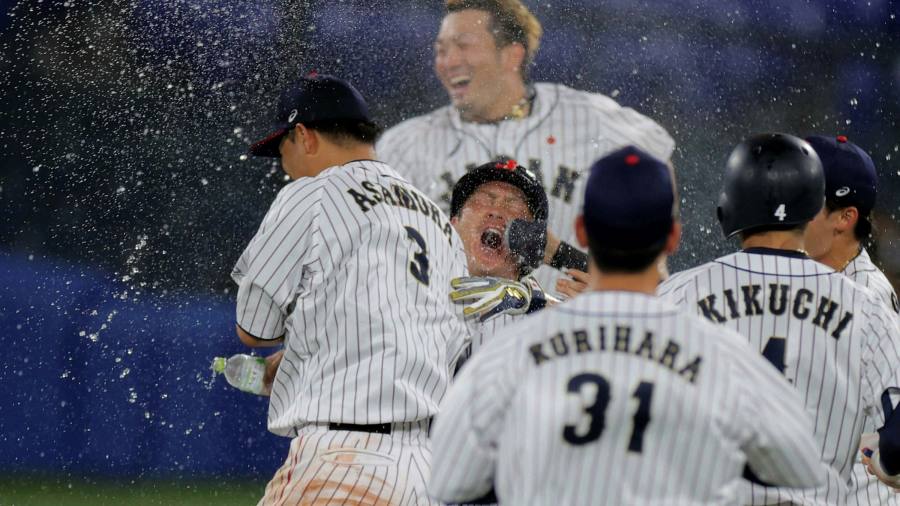 As Japan and the US square-off tonight for the gold medal match in Olympic baseball, the Yokohama air will be equal-parts thick with history, humidity and the rich possibility of humiliation.

The winner will grasp the coveted top medal — with Japan perhaps adding to what has already been a record haul at these games or the US clawing back some last minute dignity on a medals table where China has dominated in golds.

The victory, over a field that pitted the hosts and the US against Israel, Mexico, the Dominican Republic and South Korea, will rank for most observers among the hollowest and least relevant of these games. The sport itself was only reinstated for Tokyo 2020 as a favour to Japan, and will be dropped before the torch reaches Paris in 2024.

But all this drastically understates how important the match is for the two on the field: both competing in what is, for each country, a cherished national sport, a national obsession, a mirror to the national soul and a century-old metaphor for the swash and backwash of the two nations’ relationship. A Japanese win in Yokohama will settle an old, old score.

Consider the options for anyone deciding to bring themselves up to speed with the history of Japanese baseball and its extraordinary clutch on the heart of the world’s third-biggest economy.

Since the early 1980s, there has barely been a dry spell in the publication of books on the theme. Titles like You Gotta Have Wa, The Chrysanthemum and the Bat, A Zen Way of Baseball and Baseball Haiku have landed in bookstores with metronomic regularity. The phenomenon has persisted so long that one of the best recent reads has been the 2018 analysis Contesting the Myths of Japanese Baseball.

And these books spring from fertile soil. Japan’s love of baseball was and is genuine, as is the belief (particularly within the education system) that its simultaneous dependence upon self-sacrificing teamwork, honed individual skill, dedication and precision are qualities with a critical value to an industrial society.

At the same time, Japan’s sense of place in the world — or at least, in its postwar relationship with the US — has also found helpful material in baseball. Hideo Nomo, Hideki Matsui and now Shohei Ohtani have been hugely successful exports from Japan to North America’s Major League Baseball, their triumphs at the plate and pitching mound becoming must-see moments for Japanese TV channels obsessed with their progress abroad.

The long career of Ichiro Suzuki in the MLB, along with a list of achievements that put him among the greatest ever players of the game, was a powerful symbol of a process through which Japan sloughed any feelings of inferiority and grew increasingly confident of its parity with the masters of the sport.

And while all this has happened, baseball, like so much in Japan, has bowed to the country’s long demographic change — an ageing and shrinking of the population that has begun to change the core precepts of work and leisure.

Since 2011, Japanese fans of the Nippon Professional Baseball League have dropped by about a third to 24m — still a huge slab of the population, but an indicator of a sport that is battling hard to secure the next generation of fans.

A gold medal for Japan may resonate weakly in most parts of the world — and even the US may be able to shrug off the battering of pride. But from the great Yokohama stadium to the smallest school playgrounds of rural Japan, it would be a victory that meant everything.

The US men’s basketball team sealed a narrow victory over France on Saturday, to earn their 16th Olympic gold medal in this sport, avenging a group-stage loss to Les Bleus that made the Tokyo tournament more competitive than most previous Games. Kevin Durant led the Americans with 29 points in the 87-82 victory, while Evan Fournier put up 16 points to power the French to a tight last quarter.

“A lot of people said it was going to be tough to win”, said Durant. The US players held a team meeting after the group stage loss to France, he said, “and when you have a team meeting you know you kind of hit bottom”. Ultimately, he said, sealing the victory with a group of National Basketball Association all-star teammates “brings me a lot, a lot of joy”.

Laura Kenny became the first female British athlete to claim Olympic titles in three consecutive Games. She won the women’s madison race alongside teammate Katie Archibald at the Izu Velodrome on Friday to become the most successful female cyclist ever at the Olympics. “To have Katie here — it feels like I am racing with my sister,” she said afterwards. “I couldn’t have done it without her.” That victory capped a glorious day for Team GB’s athletes, with Kate French claiming gold in modern pentathlon, with other medals in athletics, hockey and track cycling.

Then on Saturday, Galal Yafai won the men’s flyweight boxing title following a split decision in the final bout against Carlo Paalam of the Philippines. That represented Britain’s 19th gold of the Games.

Canada beat Sweden in a dramatic women’s football final on Friday night in Yokohama. The game finished 1-1 after extra time. Caroline Seger missed the crucial spot kick in the subsequent penalty shootout. “It felt like my whole life just crashed,” said Sweden’s captain. The victory meant 38-year-old Christine Sinclair, who has scored more goals in international football than any other male or female player, adds Olympic gold to an already storied career. Brazil face Spain in the men’s final on Saturday night.

Italy continued their improbable run in the men’s sprints at these Olympics, taking the gold in another shock victory in the 4x100m relay. The foursome ran a national record 37.50 to clinch victory in a photo finish against Britain, with bronze going to Canada. The result was as much a stunner for the victors as it was for the absence of Jamaica from the podium for the first time since 2008, finishing fifth. Lamont Marcell Jacobs, the surprise individual 100m champion who ran second leg for the victors, said after the race that “this is the year of Italy, this is our year. We won the Eurovision [song contest], we won the football European championships, we won five gold medals [in athletics]”.

Click here to see FT’s “alternative medals table” which ranks nations not just on their medal haul, but against how they should be performing against economic and geopolitical factors

Tokyo Olympics Daily is written by the team behind the Scoreboard business of sports weekly newsletter, with contributions from the FT’s Tokyo bureau. Sign up to Scoreboard here to receive it in your inbox every Saturday morning.