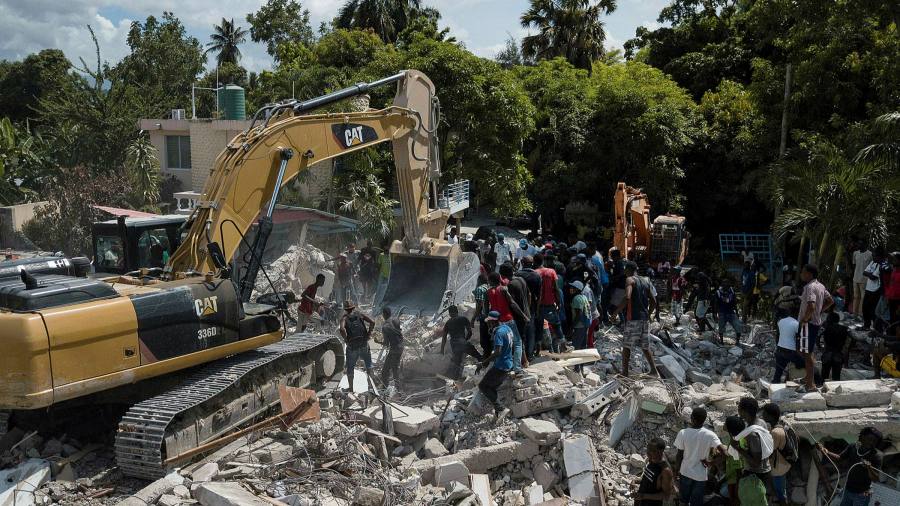 Sign up to myFT Daily Digest to be the first to know about Haiti news.

Tropical Storm Grace reached Haiti on Monday and was expected to hit precisely the same part of the country still reeling from Saturday’s powerful earthquake, which killed around 1,300 people and injured thousands more.

The country’s civil protection agency issued an orange alert and warned of “heavy rain, thunder and gusts of wind . . . on the southern peninsula of the country”, where rescue workers are still searching for survivors from the 7.2-magnitude earthquake and where medical teams are treating the injured, often outdoors as the hospitals are full.

The agency urged people “to avoid all hazardous areas such as streams, rivers, mountains and the coast”.

Videos on social media suggested that Grace had already reached eastern Haiti, bringing heavy rain. It was expected to pass over the quake-shattered west later in the day.

In the town of Petit-Trou-de-Nippes, the epicentre of the earthquake, some 150km from the capital Port-au-Prince, aid workers described a dire scene.

“We conducted some initial assessments of the damages here in Nippes and everywhere is agony,” Allen Joseph, programme manager for aid agency Mercy Corps, told the Financial Times. “Many, many people are without homes any more. People everywhere we went were crying, worried.

“Moving around is very difficult. We found a bridge out, and other challenges for getting around and moving supplies. There were aftershocks all through the day.”

The magnitude 7.2 quake was even stronger than the devastating tremor that killed tens of thousands of people in 2010. Nearly all those who died this time were in the three provinces of Grand’Anse, Nippes and Sud on Haiti’s southern peninsula.

The earthquake comes at a desperate time for Haiti. Last month, the country’s president Jovenel Moïse was assassinated, raising uncertainty over his succession and heightening political tensions just months before elections are due to be held.

The country’s prime minister Ariel Henry, who has been in the post less than a month, has declared a state of emergency. Responding to criticism of a perceived slow roll-out of aid for the victims, he said: “As of this Monday, we will act with greater speed.”

“We are going to increase our energies tenfold to bring assistance to the maximum number of victims possible,” he tweeted.

In Washington, President Joe Biden dispatched a team of 65 rescue workers to the Caribbean nation.

The quake rekindled memories of the devastating earthquake of 2010, which killed up to 300,000 people, left thousands more homeless and caused around $8bn in damage — equivalent to 120 per cent of GDP, according to the World Bank.

Haiti has struggled to recover since then and in 2016 was pounded by Hurricane Matthew — the worst storm to hit it in half a century.

The country has also been blighted by man-made disasters. United Nations peacekeepers who were deployed to the island following the 2010 quake inadvertently sparked an outbreak of cholera by contaminating a key water source. The disease has since killed at least 10,000 Haitians.