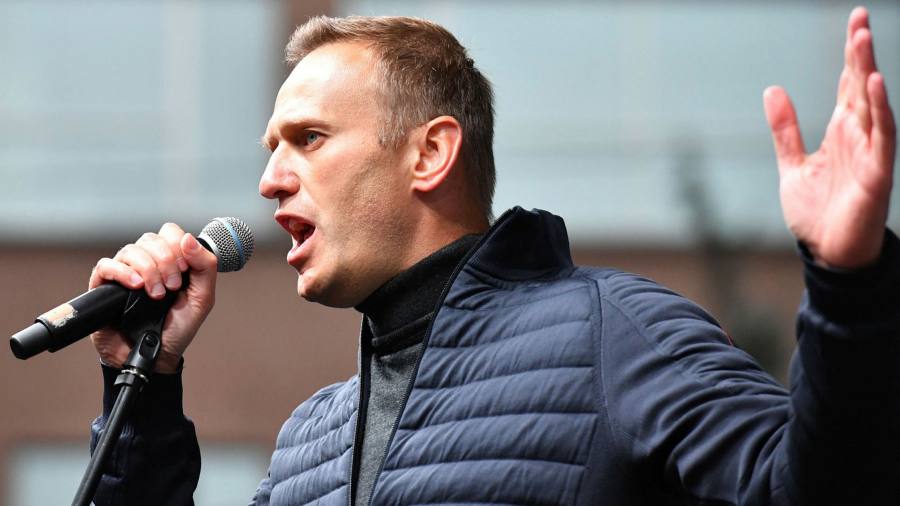 Sign up to myFT Daily Digest to be the first to know about Russia news.

The UK and the US issued joint sanctions on Friday against seven Russian nationals linked to the 2020 nerve agent attack on opposition activist Alexei Navalny.

The UK’s Foreign, Commonwealth and Development office and the US state department said they were freezing the assets of seven people linked to the Russian Federal Security Service (FSB), and would also subject them to travel bans.

In a joint statement, the two governments said that the people were “directly responsible” for either planning or carrying out the poisoning of Navalny on August 20 last year.

“We call on Russia to comply fully with the Chemical Weapons Convention (CWC), including its obligations to declare and dismantle its chemical weapons programme,” they added.

“Since the horrific poisoning of Alexey Navalny took place a year ago, the UK has been at the forefront of the international response against this appalling act,” said British foreign secretary Dominic Raab.

“We are sending a clear message that any use of chemical weapons by the Russian state violates international law, and a transparent criminal investigation must be held,” he added. “We urge Russia to declare its full stock of novichok nerve agents.”

The US Treasury said it stood with the UK in condemning the Kremlin’s use of a chemical weapon to target a prominent opposition leader. “Navalny’s poisoning was a shocking violation of international norms . . . [and] part of an ongoing campaign to silence voices of dissent in Russia,” said Andrea Gacki, director of the Office of Foreign Assets Control at the Treasury.

The UK’s actions on Friday mark the second time that the government has imposed sanctions under its autonomous Chemical Weapons sanctions regime.

Last October, the UK government introduced sanctions against one organisation and six individuals in relation to the poisonings. Those sanctioned included Aleksandr Vasilievich Bortnikov, director of the FSB, and Sergei Vladilenovich Kiriyenko, first deputy chief of staff of the Presidential Executive Office.

The announcement came on the first anniversary of the poisoning of Navalny, a prominent Kremlin critic who was exposed to the novichok nerve agent on a flight from Siberia to Moscow. In February of this year, having spent months recovering from the attack, he was sentenced to two and a half years in prison in the country. In a press conference with German chancellor Angela Merkel in Moscow on Friday, Russia’s president Vladimir Putin denied that Navalny’s arrest had been politically motivated, saying instead that it was “for criminal violation of the law regarding foreign partners”.

On Thursday, in an article in the Guardian, Navalny called for tougher action in the fight against global corruption and stricter sanctions against oligarchs in “Putin’s entourage”.

He added that “only those should be fighting corruption who follow the law faultlessly themselves”.

Moscow hit back at Friday’s sanctions, noting the publication of the FSB staff’s personal information on a UK sanctions list and threatening a tit-for-tat release of data concerning British special services.

“We need to investigate how this information got leaked, the FSB staff data — and take measures,” he added. “Let us also declassify for the whole world the data about MI-6, MI-5 staff. I’m sure the FSB and [foreign intelligence service] have a lot of such data.”