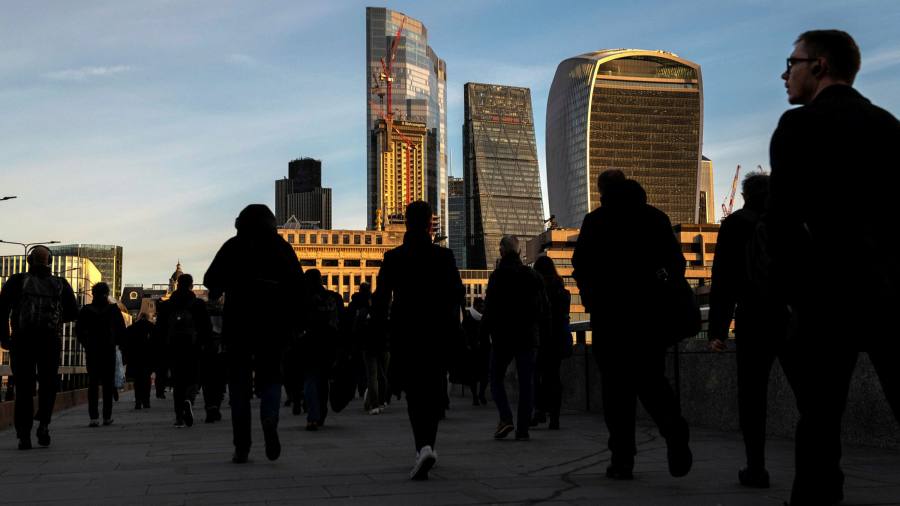 UK businesses are grappling with staff absences of about double their usual level as the Omicron coronavirus variant sweeps across the UK — but surveys indicate the disruption is more likely to raise costs than halt production.

The CBI business group said its members were reporting staff absence rates of about 10 to 15 per cent on average across the country, well above the 5 to 6 per cent usual for January, with higher levels in some parts of hospitality and retail, and in virus hotspots where cases were most prevalent.

But while sickness has put an acute strain on parts of the public sector — hospitals and schools, in particular — the CBI said most larger companies would be able to cope by hiring temporary workers, putting off non-essential work and making do with lower staffing levels — provided the number of workers self-isolating did not rise to a tipping point.

“If that 10-15 per cent hits 20 per cent, that’s when you would see businesses closing temporarily, especially small and medium-sized enterprises,” said Liz Crowhurst, director of the CBI’s policy unit, adding that recruitment agencies were seeing “all previous records destroyed” in demand for temps.

“Businesses are under strain but they are not at risk of stopping production,” said Neil Carberry, chief executive of the Recruitment and Employment Confederation.

However, this was largely because Omicron hit just as the pre-Christmas surge in demand for staff in the logistics sector was abating, he added, and simply meant that the hiring problems many employers already faced in the autumn had not worsened.

Even in November, four in five businesses were struggling to recruit, according to a survey published on Thursday by the British Chambers of Commerce. The REC’s quarterly survey of recruiters, also published on Thursday, suggested vacancies were still rising in the second half of December and candidate scarcity increasing — albeit at the slowest pace since April. Meanwhile, the highest proportion of respondents on record said starting pay had risen.

The high agency costs many companies are now incurring to arrange cover for self-isolating staff could add to existing wage pressures that are fuelling inflation, especially in sectors such as food manufacturing and warehousing that already face bigger challenges with recruitment.

Clare Bottle, chief executive of the UK Warehousing Association, said some operators had reported more than 30 per cent of their staff were off sick in the first week after the holidays — and several were toughening their policies on sick pay as a result, paying only the statutory minimum.

“It’s not disastrous. It is manageable,” Jon Parish, commercial director at Miniclipper, a Bedfordshire-based logistics company said of Omicron’s impact.

But when staff called in sick, it was now sometimes impossible to find agency cover at any price, he said, adding that the company had already raised employees’ salaries by 7 per cent in the past year, while passing on the cost to customers.

Andy Lawrence, managing director of Maxim Logistics, a Midlands-based business delivering chiefly to food manufacturers, said Omicron had made it harder to manage staff absence, especially given the longer self-isolation requirement for those who were not vaccinated.

The company had been able to “juggle people around”, he added, but it had seen more customers cancelling orders at short notice because they were unable to run shifts.