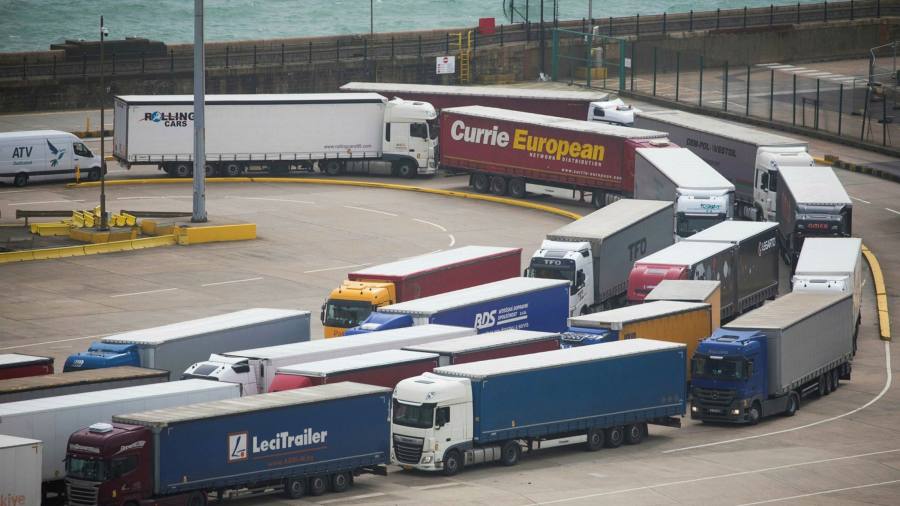 Boris Johnson’s government has been forced to delay imposing checks on EU goods entering the UK until next year as it attempts to stop Brexit further exacerbating supply chain problems.

The move means that British exports to the EU are subject to full checks, while imports into the UK by European competitors are free of paperwork and border controls.

“It’s ironic,” said one EU diplomat. “They talked about taking back control, but they are letting products into the Britain without any controls at all. That’s fine with us.”

The wholesale delay to the UK border regime was announced by Lord David Frost, Brexit minister, in a low-key written answer on a day dominated by government Covid announcements.

“We want businesses to focus on their recovery from the pandemic rather than have to deal with new requirements at the border,” Frost said, saying the new timetable for border checks was “pragmatic”.

Frost said the delay to checks, which will particularly affect food and agricultural products, was in response to the supply chain problems, which he blamed on the global pandemic.

Others have argued that Brexit has exacerbated problems, particularly with regard to a labour shortage in Britain.

Meanwhile, some EU officials suspect Britain’s border control regime is not yet fully ready for the new regime, although Frost insisted the government was “on track” to deliver the new systems.

Under Frost’s proposals, customs declarations and controls will be introduced on January 1 2022 as planned, but safety and security declarations will not be needed until July 1 2022.

The requirement for pre-notification of agri-food imports to the UK will be introduced on January 1 2022 instead of on October 1 — the move will help to avoid further Christmas disruption to food supplies.

Britain’s food and drink sector said there would be dismay at the last minute announcement by Frost. Companies had invested heavily to prepare for the new import regime on October 1.

The Food and Drink Federation said “the rug has been pulled” on those companies that followed government advice to prepare for the new regime, while rewarding those who ignored it.

“Worse, it actually helps the UK’s competitors. The asymmetric nature of border controls facing exports and imports distorts the market and places many UK producers at a competitive disadvantage with EU producers.”

Wright added that the government needed to put in place financial support to help companies prepare for the new deadlines, but said it was at least welcome that ministers accepted that supply chains were “under extreme pressure”.

Shane Brennan, chief executive of the Cold Chain Federation, said the temporary extension, while welcome, pointed to the difficulties created by Brexit that requires imposing “rest of world” checks on high-intensity EU-UK trade.

“By kicking the can down the road again, the government has averted potential disaster for Christmas food supplies — however, you have to ask why it has come to this yet again?”