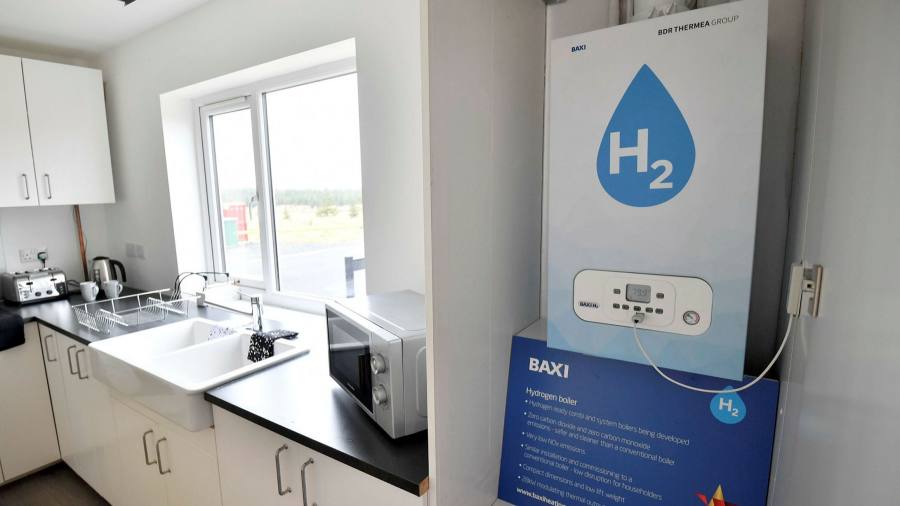 Sign up to myFT Daily Digest to be the first to know about Energy sector news.

Boris Johnson must move with “more urgency” and double targets for producing so-called low-carbon hydrogen by 2030 if the UK is to reach its net zero emissions goal, industrial groups have warned.

The UK prime minister said last year he was aiming for 5GW of low carbon hydrogen production capacity in the UK by the end of the decade. A number of countries are looking at ways to use the highly flammable gas, which mainly produces water instead of carbon dioxide when burnt, as a way of decarbonising sectors such as heavy industry and heating.

Johnson threw his weight behind hydrogen in his blueprint for a “green industrial revolution” last November despite concerns from a number of environment groups and academics that it is being “overhyped.” Some production methods are highly energy inefficient and others prolong the extraction of fossil fuels. Low-carbon hydrogen is produced in two ways: from natural gas using carbon capture technology or from water using renewable energy.

But industrial groups that back the fuel have warned the 5GW target is already looking outdated as other countries and the EU forge ahead with hydrogen projects.

“If hydrogen is to play its full part in helping the UK reach net zero, then we need to target 10GW of hydrogen production by 2030,” said Ed Gill, a project leader at the Energy Networks Association, whose members are carrying out tests to use hydrogen to heat homes.

The government is expected in the coming weeks to publish a much-anticipated hydrogen strategy, which industry groups hope will set more ambitious targets.

The strategy will be accompanied by a consultation on crucial financing mechanisms to stimulate production, including potentially adding a surcharge to consumer gas bills to subsidise early low-carbon hydrogen production schemes.

“A target of more than 5GW by 2030 could be achieved with the right framework in place,” said Danielle Stewart, hydrogen programme manager at National Grid. The FTSE 100 utility is also hoping the strategy will contain support for its project to create a 2,000km network of hydrogen pipelines linking up key industrial areas in Britain.

Chris Manson-Whitton, director of Progressive Energy, which is involved in the HyNet project to decarbonise large areas of north-west England and north Wales, said the whole industry was looking for “more urgency, more pace, more volume” in the strategy document. The HyNet scheme alone is aiming to install 4GW of hydrogen production capacity by 2030.

Manson-Whitton warned that if the UK did not step up the pace, hydrogen risked going the same way as offshore wind which would be to “deploy a lot but not necessarily using UK skills, technology”. The UK waters host the world’s biggest collection of wind farms but the majority of capital expenditure benefits foreign manufacturers.

According to a report last month by the Hydrogen Council, a lobby group, 131 large-scale hydrogen projects have been announced globally since February, predominantly in Europe, although other countries including Japan, Australia and China are also backing the fuel.

Hydrogen is just the latest area where energy groups are pushing the prime minister to move faster before the UK hosts the COP26 UN climate change summit in Glasgow in November. Renewables groups have also been pressing for a larger clean energy auction this year and new targets for onshore and “floating” wind projects.

The UK government said: “Our plan to increase low-carbon hydrogen production capacity to 5GW by 2030 is among the most ambitious in the world. It could produce hydrogen equivalent to the amount of gas consumed by over 3m UK households.”