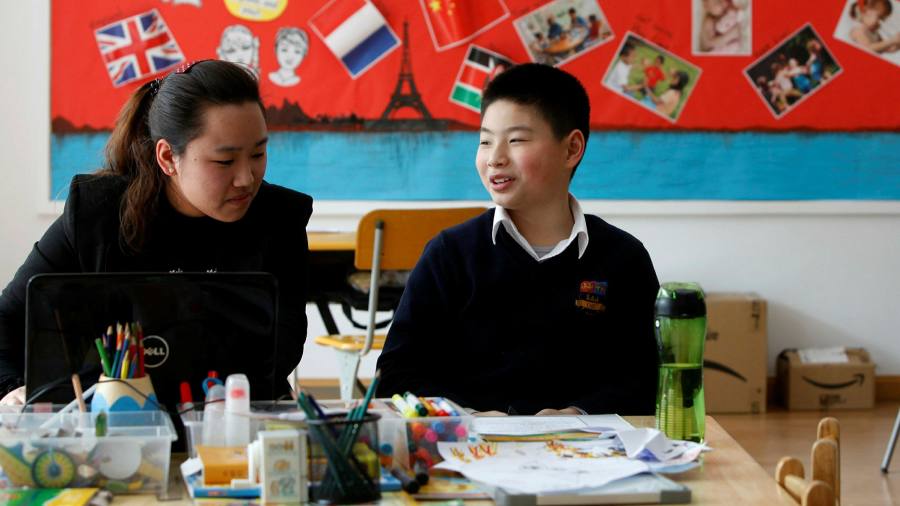 British independent schools face fresh pressures on expanding their links with China as the authorities tighten restrictions on foreign influence in the education system and seek to more than halve the number of children educated privately.

Restrictions on visas for foreign teachers are also contributing to a slowdown in the establishment and expansion of private schools for Chinese nationals, dozens of which have links to well-known British institutions — including Harrow, Wellington, Dulwich College and Charterhouse.

The changes are part of a government attempt to equalise education opportunity following the rapid growth in private schools, including those offering international exams and teaching in English as more students seek to apply to foreign universities. The reforms follow recent draconian curbs on private tutoring services.

The central government in May stopped approving new private schools for the compulsory, or first nine of 12, years of education and last month at least four provinces said there was a goal to cut the proportion of children who attend such schools from more than 10 per cent to under 5 per cent by the end of the year.

Meanwhile, some provincial authorities are imposing controls on the curriculum and the use of foreign textbooks in private schools.

ISC Research, an educational consultancy, has identified 66 schools in China with an affiliation to 29 UK schools. These include 12 for Chinese citizens who also hold foreign passports and 52 bilingual private schools open to other Chinese citizens. It said it was aware of a further 28 schools being planned.

The government policy does not explicitly target the schools for dual nationals or bilingual establishments, which comprise about one-fifth of China’s 15,000 private primary and secondary schools, but some have been caught up in the clampdown and leaders in the sector are expecting more.

There have, for example, already been state takeovers of bilingual schools in Chongqing City and Shanxi province.

In Shenzhen, officials indicated that a number of schools, including those with foreign affiliations, were having trouble launching primary and middle school operations.

“The days of China’s runaway growth of bilingual schools are gone even though demand for western-style education remains strong,” said a principal at a Shanghai-based bilingual school that provides preparation for the A-level exams used in most British schools. “We are ready for a smaller student body in the foreseeable future.”

Shanghai this year required bilingual primary and middle schools to use the same textbooks as state schools when teaching Chinese literature, politics, history and geography; to teach Xi Jinping thought from the third grade once a week; and to seek approval for the use of foreign texts.

The schools with foreign links are usually owned and operated by Chinese investors but pay fees to the affiliated British school, which often lend their brand name and provide some staff as well as materials and advice on teaching methods.

ISC has tracked a decline in the growth of private bilingual school openings since the start of the coronavirus pandemic. Among 27 school principals and administrators outside China it surveyed last year, 13 said they were delaying or had cancelled plans to open in the country during 2021.

Pia Maske, its east Asia field researcher, said demand remained strong for international education among Chinese families but controls on private tutoring and foreign textbooks and a possible extension of the tightly regulated compulsory years “all point to the Chinese government exerting more control over private education . . . [which] cast the Chinese education market in a not-so-attractive light”.

Steve Allen, head of the LEH International school in Foshan, Guangdong province, which is affiliated to Lady Eleanor Holles school in south-west London, said he was on track to open for Chinese foreign passport holders in September with an initial intake of up to 75 pupils.

However, he added that some parents had been slow to commit to the school given the challenges in obtaining visas for non-Chinese teachers, partly the result of Covid restrictions, as well as a broader limitation on granting visas for teachers’ spouses.

“We are seeing a lot of inquiries and applications from families but when it comes to accepting the offer, there is hesitation. That’s the bit that’s changed.”

He said he was also aware of other projects with international school affiliations in Guangdong that had slowed openings following the tightening regulatory environment. The director at a leading bilingual school in Shanghai said he and other leaders would not be able to resist the clampdown. “Private bilingual schools are a part of the national education system and must be subject to regulation,” the director said. “If the government wants us to play down English language education, we will have no choice but to follow the order.”

However, Ahmed Hussain, chief education officer for Asia International Schools, which operates Harrow International School in Shenzhen and plans next year to open both a private bilingual school and nursery school there, said he was “optimistic” the Chinese market for British schools was “sustainable”.

“For those entities seeking to deliver an authentic private school education, the issue of textbooks or curriculum content is not a new or deeply challenging issue,” he said.

Mark Abell, a lawyer at Bird & Bird specialising in Chinese education who said he was still negotiating for a number of British schools looking to open affiliated schools in China, although he accepted “it’s going to be a little more complicated, and you need to be aware of sensitivities in some areas”.