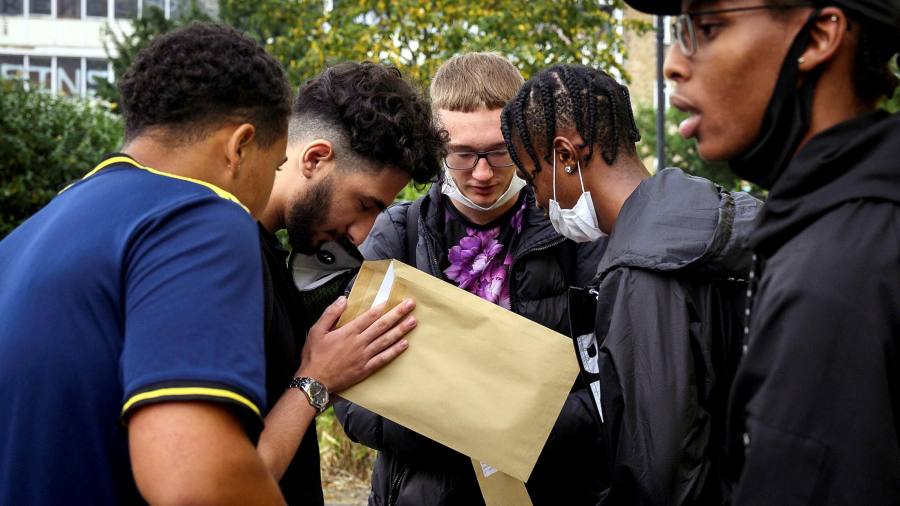 The UK’s top universities are bracing for an unprecedented squeeze on their most sought after courses ahead of the release of A-level exam results in England and Wales on Tuesday.

Many institutions have said they may be unable to accept applicants who narrowly miss offers, despite complaints that significant inconsistencies in grade assessment across schools will deal unfair outcomes for students.

The predictions hint at chaos down the track for universities as high-ranking institutions struggle to accommodate a rising number of applications while lower-tariff counterparts fear shortfalls as pupils set their sights on more competitive offers.

One vice-chancellor and member of the Russell Group of 24 higher education institutions told the Financial Times that a “very significant” grade inflation would be “a problem for many in the sector”.

“One worry is that universities might struggle to give places to students who narrowly miss their offer grades,” they said.

The admissions process — often described as “landing a jumbo jet on a postage stamp” because of the difficult calculations involved — has been more uncertain, and in some cases more competitive, this year.

With exams cancelled in favour of teacher assessments for a second year in a row because of the pandemic, grade averages are expected to be higher than in 2020, when the proportion of top A-level marks rose 13 per cent.

The squeeze on spaces has been exacerbated by a “demographic bulge”, referring to the expanding size of the 18-year-old cohort as well as an increase in the proportion of this age group applying to university.

Admissions service UCAS recorded 311,000 18-year-olds applied to higher education by the end of June, up 10 per cent on last year.

Clare Marchant, UCAS chief executive, said even without grade inflation these factors would “increase a sense of competition”.

At the same time, real-term falls in per student funding and constraints on space mean some universities are reluctant to expand.

“There’s a large number of 18-year-olds in the system and they’re likely to get good grades,” Mark Corver, founder of DataHE, an education consultancy, said. “Probably for the first time since 2011 actual supply limitations [on places] will come into play.” University College London admitted 1,500 more students than planned last September but has cut back its offers this year despite receiving 16 per cent more applications © Richard Tugwell/Alamy

DataHE estimates the proportion of applications given an offer at all universities fell 1 percentage point this year. But at the most competitive, the chance of securing a place fell significantly, from 74 to 69 per cent.

Although more people would go to university this year, many might feel they had received “harsher treatment for a given set of grades”, Corver said.

His warnings were echoed by admissions officers at top universities, who expect their capacity to accept students to be constrained.

University College London, which last September admitted around 1,500 more students than planned, has cut back its offers this year despite receiving 16 per cent more applications. It still expects courses to be oversubscribed.

Speaking last week, Bella Malins, UCL’s director of access and admissions, said she was “concerned” about results echoing the trend of the International Baccalaureate, an alternative qualification, which returned higher-than-expected grades earlier this year.

“With our highly selective programmes we have to reject really good students at any time — and more so this year. I would expect there to be similar conversations at many universities,” Malins said.

Meanwhile, mid and lower-ranking universities are hoping institutions such as UCL limit offers. They are worried that a jump in attainment will mean fewer students, as those with higher grades abandon them for places at more elite institutions.

“The concern is ‘do the Russell Group try and fill their boots, or do they maintain their size and become more selective?’” said Chris Husbands, vice-chancellor of Sheffield Hallam.

The warnings of greater competition at universities are little comfort for pupils already anxious about an unusual — and highly variable — method of awarding grades this year.

Although teacher-led assessments are moderated by schools and exam boards, schools have been given substantial freedom over how to calculate grades, with some running formal tests while others favouring written coursework, or pupils’ performance in class.

According to the Sutton Trust, independent schools were more likely to give students access to past papers or other materials than state schools, and early reports suggest more grade inflation among these more privileged schools this year.

Eli Sassoon, an A-Level student from London, is one of many young people worried that life-changing decisions about where to study or future jobs rest on unreliable data.

“Everyone’s explaining how they did it differently, some people know exactly what they’re going to get,” he says of his peers at different schools. “It’s such a huge range and it makes the result basically worthless.”

Dan Moynihan, CEO of Harris Federation, which runs 50 schools, said the number of offers from top universities such as Cambridge, UCL and Oxford were down about 30 per cent compared to previous years. A-level student Eli Sassoon says of his peers at different schools: “Everyone’s explaining how they did it differently, some people know exactly what they’re going to get. It’s such a huge range and it makes the result basically worthless.”

Teachers at Harris academies were “confident” they had evidence to back up their assessments, he said, but still expected pupils to challenge their results. “There’s going to be a sense of subjectivity and in the end there will be a lot of appeals,” Moynihan said.

Some schools have even sought legal advice in anticipation of a rush of complaints after results day.

However, Nicola Bennison, a lawyer at Eversheds Sutherland, said appeals would be harder to uphold than some parents and students realise. “It’s going to be exceedingly difficult to challenge.”