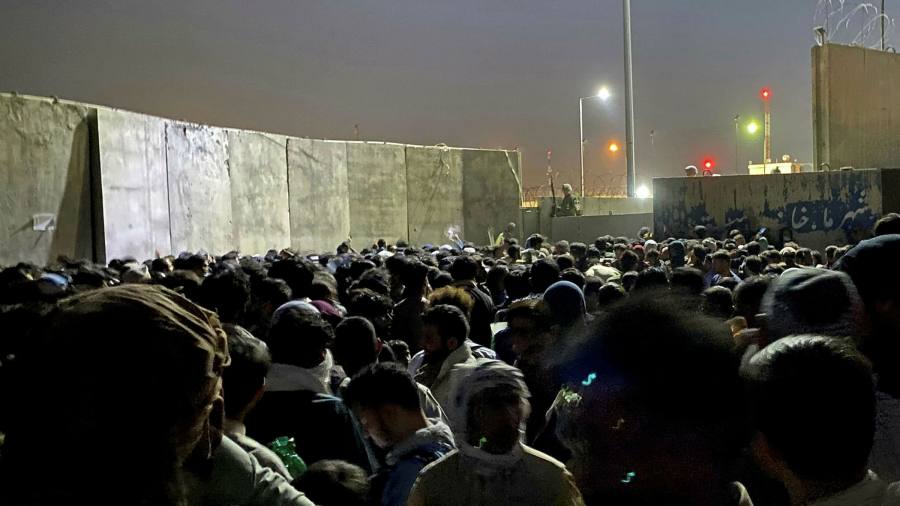 UK defence secretary Ben Wallace has warned of increasing risks of attacks on troops and evacuees at Kabul airport, as world leaders prepare to push Joe Biden to extend the US-led evacuation from Afghanistan beyond August 31.

At an emergency G7 meeting, the US president will hear calls from allies including Boris Johnson, UK prime minister, and Emmanuel Macron, France’s president, to negotiate with the Taliban for an extension, even though the Islamist group has said it will not accept any delay.

“As we get closer to the deadline, I think it’s correct to say the security risk goes up,” Wallace told Sky News on Tuesday ahead of the meeting. “It just gets more and more dangerous as add-on groups and other terrorist groups such as ISIS would like to be seen taking credit, or would like to be seen to chase the west out of the airport.”

Wallace said that world leaders would try to secure an extension from the US but admitted it was “unlikely” given the public statements made by both Biden and the Taliban.

Biden said on Sunday he “hoped” to stick to the US deadline to pull its final troops from the country, while a Taliban spokesman on Monday told the Financial Times that any delay would be a “violation”.

Speaking to reporters on Monday afternoon, Jake Sullivan, US national security adviser, said the White House believed “that we have time between now and the 31st to get out any Americans [who] want to get out”.

The precarious situation at Kabul airport underlines the fragility of the west’s position in Afghanistan since the Taliban swept to power last week following the initial withdrawal of US troops.

Tens of thousands of people are now seeking to get out of the country, including foreign nationals and Afghans who worked with western powers during the 20 year US-led operation, with many fearing reprisals from the Taliban if they stay. The US military reported its biggest day of airlifts out of Afghanistan by far on Monday, with 28 US flights taking more than 10,000 people out of the country in a 24-hour period. But many more are still in Kabul.

Wallace said the UK has evacuated over 8,600 people since August 14, including around 2,000 in the past 24 hours. “The British government position is that we want to stay longer if that is possible to do so”, he said in a later interview with the BBC, but conceded that the UK would be bound by the decisions of the US, international community and the Taliban.

He added that if the airport were to close, the UK would continue to process refugee applications from Afghans if they were able to get out of the country by other means. “We have constant services in our embassies in the region, we will beef those up, we will make sure that when or if people present themselves at any one of these embassies then we will process them incredibly quickly and get them out of that country back to the UK.”

The UK has pledged to take 20,000 Afghans refugees under a new resettlement scheme announced last week. The Home Office has said that it expected the first 5,000 people to be relocated to the UK in the first year of the scheme.