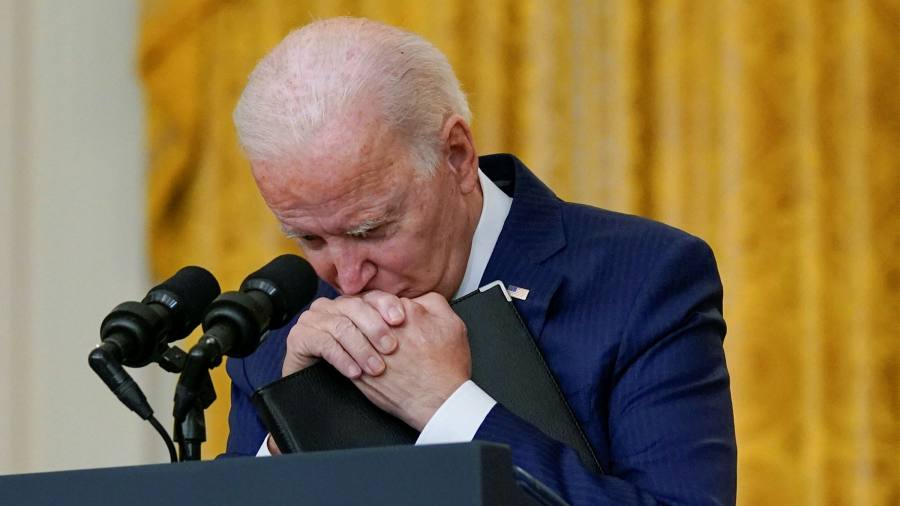 On July 8, Joe Biden stepped into the East Room of the White House to deliver a confident update on the withdrawal of US troops from Afghanistan.

The US military had left Bagram air base, the hub of operations during the two-decade old conflict, a few days earlier and the drawdown was “proceeding in a secure and orderly way”. Most importantly, no troops had “been lost”.

Biden said the Afghan military was “better trained, better equipped and more competent in terms of conducting war” than the Taliban, who were “highly unlikely” to end up “overrunning everything and owning the whole country”.

This Thursday Biden returned to the East Room with each of those assumptions in shreds, and the White House facing its biggest crisis since the president’s January inauguration.

Thirteen members of the US military were killed in a terrorist attack outside Kabul airport, as they tried to manage the chaotic evacuation of thousands of civilians out of a city that had been captured by the Taliban.

It had been a “tough” day, Biden said, adopting a much more sombre tone compared to just seven weeks earlier. The mission that he had breezily spoken of back then was now “extraordinarily dangerous”. On Friday the White House said it was steeling for another terrorist attack.

Even if the US pulls out as planned by Tuesday — having presided over the evacuation of more than 100,000 civilians through a monumental airlift from Kabul airport that has now lasted two weeks — the chaos and bloodshed of the past few days risk leaving an indelible stain on Biden’s presidency.

The most fundamental error made by the US president and his national security team, including military and intelligence officials, was to underestimate the Taliban’s ability to conquer the country as rapidly as it did. The Islamist group’s lightning-speed advance upended all of the administration’s plans for a methodical exit.

“The key miscalculation was the assumption that the US would have the luxury of time,” said Richard Fontaine from the Center for a New American Security, a think-tank in Washington.


A member of the Afghan security forces walks in the sprawling Bagram air base after the American military departed in July. Critics have identified the decision to leave the base as a tactical error © AP

Fontaine said the administration had assumed Afghan forces trained and armed by the US “would hold off the Taliban for some time”, giving them the space to process visas for Afghans before they fled the country. It had also planned to “dribble out troops” rather than having to deploy reinforcements to marshal the panicked airlift.

“All of those [assumptions were] proved wrong and they were proved wrong in very short order,” Fontaine added. “They struggled to react to very quickly changing events.”

The severity of the conditions in Afghanistan was not apparent to the White House until just before mid-August, when Taliban forces began to take over a string of provincial capitals. It was at that point when the takeover of Kabul was considered to be a realistic threat.

At the time, Biden was still planning a two-week vacation, splitting his time between his Camp David retreat in Maryland, and his two Delaware homes in Wilmington and Rehoboth Beach. But as it dawned on the White House that it was facing a far more tumultuous exit than expected, the president revised his schedule.

On August 16, as the world was captivated by images of Afghans clinging to the exterior of a military plane taking off from Kabul airport, Biden returned from Camp David to the White House to address the nation. He admitted things “did unfold more quickly that we anticipated” and blamed the situation on a lack of will among Afghanistan’s political leaders and its army to fight for their country.

On August 18, Biden returned from Camp David to the White House, where he has remained ever since © AP

After a brief trip back to Camp David, Biden returned to the White House the following day, where he has remained ever since. The mad scramble to evacuate as many US citizens and Afghans who had helped allied forces had begun. Biden pledged: “Our current military mission will be short in time, limited in scope and focused in its objectives: get our people and our allies to safety as quickly as possible.”

As the withdrawal turned into a crisis, critics pointed to mistakes in the execution of the pullout. Some, including Lindsey Graham, the Republican senator from South Carolina, lambasted the decision to leave Bagram, which forced the military to solely rely on Kabul airport for the evacuation.

Defenders of the president’s approach say that Bagram is far from Kabul, in more hostile terrain, and that it would have been difficult to access for those fleeing the country, most of whom live in the capital city.

On Thursday Biden insisted he had followed the advice of his generals. “They concluded, the military, that Bagram was not much value added, that it was much wiser to focus on Kabul, and so I followed that recommendation,” he said.

US allies, particularly in Europe, who were alarmed at the unfolding events, had pressed the Biden administration to ditch its August 31 deadline and extend its presence in order to allow more time for evacuations.

But Biden rejected any extension, fearing every day that passed would bring new risks for US troops, according to people familiar with his thinking.

“My understanding is that the US engagement with its European allies was actually quite minimal,” said Daniel Byman, a senior fellow at the Brookings Institution in Washington. “The US made a bunch of decisions rather than consulting allies even though they’ve been sacrificing the lives of their own people for years.”

Byman added: “Not surprisingly, they’re not really pleased about it.”

Even as TV screens across the world were plastered with dramatic scenes of desperate Afghans trying to flee the country, officials at the White House, Pentagon and state department felt their efforts to scale up evacuations were going increasingly well.

Growing numbers of people were being flown out of Kabul airport every day, reaching a total of more than 109,200 people by Friday, including at least 5,000 US citizens. US helicopters and special forces made several incursions outside the airport in order to rescue civilians.

“Six countries on four continents are contributing to this effort, one of the largest airlifts in history,” Jake Sullivan, Biden’s national security adviser, told reporters on Monday.

A pale and tired-looking Sullivan said the airlift had been “a massive military, diplomatic, security, humanitarian undertaking” that was “a testament to the power and purpose of the United States and our allies”.

Jake Sullivan, Biden’s national security adviser, this week said the airlift was ‘a testament to the power and purpose of the United States and our allies’ © Bloomberg

But as the week went on, the sense of crisis inside the White House started to intensify. Biden huddled daily with his top national security advisers in the situation room every morning. Press briefings were cancelled or rescheduled as officials struggled to give an accurate account of a rapidly-changing situation. On Tuesday the president was expected to deliver remarks at noon, only to end up doing so almost five hours later.

The Taliban’s capture of Afghanistan meant that Biden now had to rely on the Islamist group to ensure safe passage for Afghans and foreign nationals who were rushing to leave, and to prevent attacks from Isis-K terrorists.

Biden dispatched Bill Burns, the director of the CIA, to make a stealth visit to Kabul to meet the Taliban and US officials acknowledged they were in active contact with the country’s new rulers.

“The Taliban, whether we like it or not, is in control,” Antony Blinken, US secretary of state, said on Wednesday. “It’s been important to work with them to try to facilitate and ensure the departure of all those who want to leave.”

But by Thursday the hope that the Taliban could bring some order to the chaotic evacuation lay in tatters. Despite multiple warnings from US, UK and Nato officials about an imminent threat at the gates of Kabul airport, an Isis-K suicide bomber was able to elude Taliban checkpoints.

The explosion wrought carnage on the crowds looking for a way out of the country, and dashed Biden’s hopes that not a single troop would die in Afghanistan under his watch.

When the mission wraps up next week, politicians in congress will rake over the administration’s many missteps. But as the dust settles, the biggest mistake will still have been to underestimate the enemy, according to Fontaine.

He said: “The original plan clearly had to go out the window with the Taliban’s conquest.”