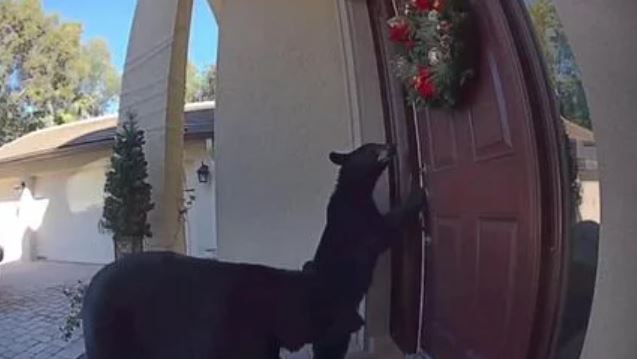 How many guests did not come to the door of the house on the day of festival. So if a big bear with his cub appears in front of the door, trying to open the closed door, he has to be surprised. The surprise happened last Christmas, in Florida, USA.

According to a report by United Press International, Marlen Stark lives in Sanford, Florida, USA. This unwelcome guest appeared at the door of his house with his cubs. “I was at home on Christmas morning,” Stark told the media. Suddenly the doorbell rang. I thought maybe there was a guest on the festival day. ‘

Marlene Stark rushed to open the door. The woman added, “Just before the door opened, I realized there were no guests on the other side. Instead, a large bear with cubs is standing. Not only that, he is trying to open the door by pushing from outside. ‘He immediately turned the knob of the door and locked it from inside.

Marlene Stark added, “I wouldn’t have realized there were bears without a camera on the door. There could be a big danger if the door was opened. ‘He said,’ Mother bear was trying to open the door. I had no idea it would succeed. I was scared. Luckily I was able to lock it from the inside. ‘

But in the end this unwelcome guest did not succeed in opening the door. When Marilyn Stark’s neighbors came down the road, the bear took the cub and went to the next forest. “I don’t know why the bear came to my house,” said Marilyn Stark jokingly. Maybe he came to celebrate with us! ‘