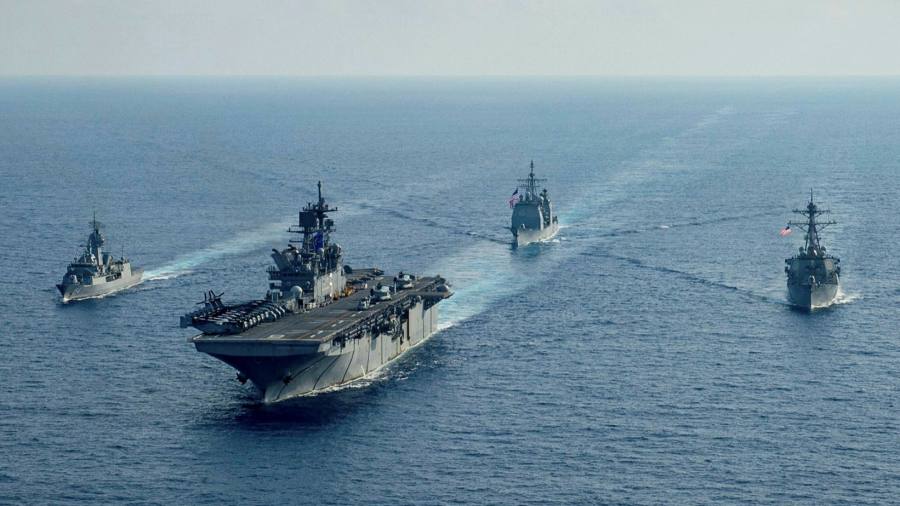 The US has launched a new trilateral security partnership with London and Canberra that will enable Australia to build a fleet of nuclear-powered submarines, a move that will strengthen the allies’ ability to counter China.

President Joe Biden announced the effort, which is designed to bolster alliances amid rising tensions with China over disputes ranging from the South China Sea to Taiwan, in a virtual event on Wednesday evening with British prime minister Boris Johnson and his Australian counterpart Scott Morrison.

Biden said the initiative, including the submarine plan, was necessary to ensure the countries had the best technology to “defend against rapidly evolving threats”, in rhetoric that appeared to be aimed at Beijing.

“Our nations . . . have stood shoulder to shoulder for literally more than 100 years,” Biden said. “Today we’re taking another historic step to deepen and formalise co-operation . . . because we all recognise the imperative of ensuring peace and stability in the Indo-Pacific.”

A senior US official said that while Australia would acquire nuclear-propulsion technology — which the US has only shared with the UK — Canberra would not develop nuclear weapons. Biden also stressed that the submarines would not be armed with nuclear weapons.

The US official said the vessels would boost Australian naval capabilities because they were faster and more stealthy than conventional submarines. The submarines can also operate further from Australia, including in the South China Sea, and do not need to surface as frequently.


US president Joe Biden, centre, in the East Room of the White House, with the prime ministers of Australia and the UK on video link — Scott Morrison on the left screen and Boris Johnson on the right. © Oliver Contreras/POOL/EPA-EFE/Shutterstock

Morrison said the allies had to elevate their partnership to a “new level” because of the increasingly complex environment in Asia, another thinly veiled reference to China. Johnson said they were “opening a new chapter” and would work “hand in glove to preserve security and stability” in Asia.

The leaders said that in addition to helping Australia build a nuclear-powered submarine force, they would also boost co-operation in areas such as cyber security, artificial intelligence, and quantum computing.

One British official said the alliance would focus on maritime and defence technology, in contrast to the “Five Eyes” arrangement through which the US, UK, Australia, New Zealand and Canada share intelligence.

The US official said Biden did not tell China’s Xi Jinping about the initiative when the two leaders spoke last week. The new partnership — dubbed AUKUS — was formed one week before Biden is due to host the leaders of Japan, India and Australia for the first in-person summit of the “Quad”. The Quad security grouping is also designed to counter China and has been described by Beijing as an “Asian Nato”.

Kori Schake, head of foreign and defence policy at the American Enterprise Institute, said Wednesday’s deal would send a strong signal to Beijing.

“It strikes me as an elegant message, a reminder to China that Australia has the technological capabilities and alliance relationships that they could become a nuclear power if the threat China poses becomes so severe”, Schake said. “It [is] also . . . a good moment for the Biden administration to demonstrate its commitment to the security of its allies after the debacle of the US withdrawal from Afghanistan.” 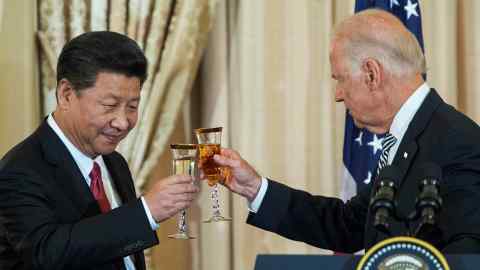 Australian media said Canberra would end an existing $90bn programme to buy 12 French-designed conventional submarines. The official said the allies would decide over the next 18 months how to build the fleet.

“This is a fundamental decision that binds decisively Australia and the United States and Great Britain for generations,” the US official said.

Richard Fontaine, head of the Center for a New American Security, said the submarines were a “big deal” that would not only give Australia better capabilities but would help Washington, particularly amid criticism that China is outpacing the US in building navy ships and submarines.

“The real measure of comparison is not China on one side and the US on the other. It’s China on the one side with the US and its allies on the other,” said Fontaine.